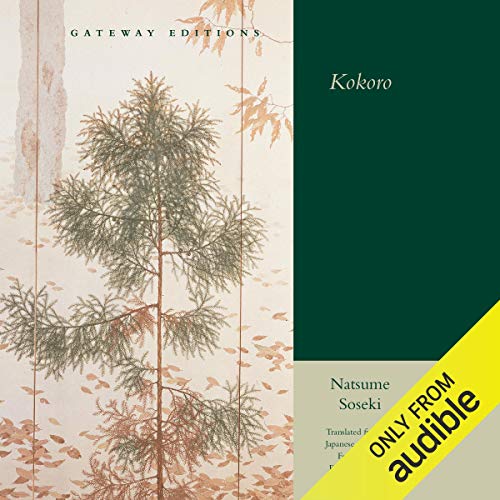 "The subject of Kokoro, which can be translated as 'the heart of things' or as 'feeling,' is the delicate matter of the contrast between the meanings the various parties of a relationship attach to it. In the course of this exploration, Soseki brilliantly describes different levels of friendship, family relationships, and the devices by which men attempt to escape from their fundamental loneliness. The novel sustains throughout its length something approaching poetry, and it is rich in understanding and insight. The translation, by Edwin McClellan, is extremely good." (Anthony West, The New Yorker)

The Heart Of Things, Relationships & Feelings

This is a complicated review. I found and read this book because of another book I just finished reading. That title was The End of Life Book Club--a story about a mother and son who used books and reading to cope with terminal illness, loss, connection and family. They raved about this Japanese title so I found it and listened.

The writing is spare and poetic. The book was written in 1914 and offers an interesting exploration of loneliness and connection in "modern" times. These concepts are strangely applicable to our modern times. But more than this it offers deeper insight into The End of Life Book Club. Soseki speaks about not closing your life off by walling yourself in behind mountains of books. The mother and son from End of Life often lost opportunities to truly talk and connect on deeper personal levels because they focused so much on the current book. Don't get me wrong, reading and discussion of books is expansive, enriching and powerful. But, at times books became a safe haven and functioned as insulation from difficult conversations.

Back to this current book review-- Kororo is a fascinating look at life and transcends the limitations of time, culture and perspective. A universal story which has much to offer to current day readers. The reading style is soft and gentle. The story tackles difficult issues and does so with beauty and grace. An unusual book which I really enjoyed. Interesting to see that issues of coping with family and finding ways to connect with others isn't just a current day--modern problem.

Don't need to know anything about Japan to enjoy

Soseki's Kokoro is probably THE most famous work of modern literature in Japan (everyone reads the second half of it in their school text books), but you certainly don't need to know anything about Japan or Japanese culture to enjoy and get something profound from this work. Like so many great works of fiction, it appeals to the human in everyone, and asks those questions every human struggles with, about life and death, and the ups and downs of life.

I wanted to stop reading but i'm glad i kept going


the beginning chapters of this book were somewhat hard to go through, they were dull and it sounded like they were just a bunch of mostly unrelated scenes, and unimportant internal dialogues, I could hardly stop myself from wanting to refund this book, this book however gave me insite to the old Japanese frame of mind, to me (a modren person) it sounded weird how the main character had this sort of attachment to his Sensi, an older male teacher and i couldn't grasp why someone would need a relationship of this sort, this book was published in 1909 where sexism against women were not something to look down upon thus there were a few lines that were quite sexist which I wasn't fond of, but i guess it's good in the sense that it shows you how cultures evolved to respect women more nowdays, despite the urge to refund this book, i kept listening and gradually grew more familiar and attached to the characters, as the story progresses I start to understand why this book was called Kokoro or "heart", the book continues as sort of confessions to what Sensi hid from his student, the plot ttwoards the end becomes intresting, i'm glad i decided to continue reading but I wouldn't recommend it to people who get bored easily.

Japanese classics of teacher and student, love and tragedy. A must read when one is exploring Japanese literature

This story always breaks my heart

I love this novel, and the fact that I can listen to it now, especially the part about Sensei, makes it more irresistible. I feel like I am actually listen to Sensei's voice and thoughts and it breaks my heart a little every time I listen to it.

Hearth touching and make you in deep emotion.

I think this book is definetely one of the Japanese classic. Soseki's writing skill is impeccable.

Great Book! The Weakness of Man

A great novel! This is a story about a respectable mans account of his life before he makes a great decision. A somber story that explores the frailty of mans heart, as well as his cruelty and guilt. I had no trouble listening to the novel at any point and would recommend it to anyone who can enjoy a story sprinkled with an air of sadness throughout. This novel is a classic by no mystery!

I absolutely adore this book. It was written in such a subtle way which still was able to draw so many emotions from me, and it will definitely prove to be a truly unforgettable book. The narrator did a great job on it. I felt at some points as though he lacked great emotion but I soon realized that that was the way it was meant to be read. Over all, I would highly highly recommend this book.

Sometimes a book/story is so closely connected to a specific culture that I think it's hard for someone outside that culture to appreciate it. Such was the case for me, reading this novel.

The novel and the narration succeed in pulling you into a different and unfamiliar world. But there are still some disconnects. The sensei character seems like a massive drama queen to this 21st century American reader and it was hard to sympathize with him or remotely understand him.

I realized midway through that nearly all the Japanese literature I have read comes from after WWII and perhaps was easier for me to identify with because Japan has been more influenced by "the west" by that point.

All in all, I liked this book but suspect I missed some of the nuances because I don't really understand early 20th century Japan.

PS: thank you Audible for listing the translator in the description. I wish you did it for all translated works.

Soseki contrasts the psych of mid and late Meiji

Soseki contrasts the psych of mid and late Meiji.

Not for me perhaps.

I think I'm glad I listened to it, but I don't think I would go back to it again. I found the narrator frustrating at times, mostly his pronunciation of 'okaasan' (oak'sun) which drove me mad. But I also found the narrative a little difficult to engage with - I found myself getting quite annoyed with these foolish young men and their poor decision-making. I think part of the point of the book is that loneliness can make one foolish, but they came across to me as rather self-important and not as sympathetic as perhaps the author wanted. I do wonder if I would have found it more engaging if I were male.

If you’ve listened to books by Natsume Soseki before, how does this one compare?

I've not experienced any of Natsume Soseki's writing before. The closest I've come (being the other early-mid 20th century Japanese writer I've experienced) would probably be reading Yukio Mishima's "The Temple of the Golden Pavilion", which I think has a similarly unsympathetic male character who doesn't deal with his problems in a particularly healthy way. Give me "The Tale of Genji" any day.

His Japanese pronunciation. He also didn't really distinguish vocally between different speakers. Most of the time this was OK (and far better than very forced different voices), but occasionally it meant I got a little confused about who was speaking during dialogue.

Could you see Kokoro being made into a movie or a TV series? Who would the stars be?

It has been adapted at least three times, according to Wikipedia. I can see it working on the screen, although I find it difficult to imagine it being anything other than an art house movie.

I only decided to read this book because of a rather huge assignment for one of my classes in school. However, after I listened to this book I feel so that I am very glad that I did! Part 3 was a very intriguing part of this book! It felt like a book within a book! I do stand left with some unanswered questions.

The narrators poor pronunciation of the Japanese words in this book bother me a bit, seeing that I am fluent in Japanese, but I feel like he tried his best!

Oh boy that was good

Definitely recommend this book, what a story! I personally didn't guess the ending or any of the end themes whilst listening. Will purchase the book to re-read again properly. This is why I love Japanese fiction!

Written beautifully and narrated beautifully.
Can’t wait to read all the works by Natsume Soseki. Brilliant !

loved the listen. very engaging story making you want to listen to what happens next. not full of surprises or anything but great easy listen

Kokoro-the heart of things. An apt title for this book. I felt a quiet sadness on completion of reading this. A book that gives insight into Japanese sentiment/culture during the death of the Meiji era and the birth of modernisation. This is analogous to "the heart of things" with respect to the individuals experiences in their own life. I feel it is very relevant today with individual mindsets increasingly becoming concerned with the id, and the mindset shifts in the world. A good read that seems straightforward during the experience but has a lot if depth that stays with you.

Classic novel by classic writer at his best

Kokoro was the last work of the great Japanese novelist Soseki. At the height of his powers, this story looks at how decisions, personal honesty and relationships can impact us for life. Soseki manages to strip away our outer layers and expose our souls raw to our live’s hardships. Intense!