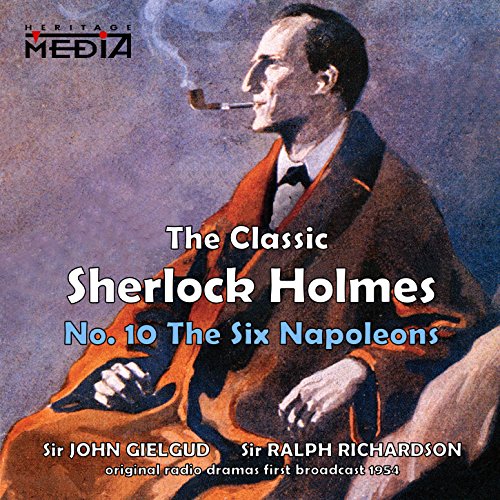 From an original story entitled "The Adventure of the Six Napoleons", this tale shows how Holmes tracks down a precious gem, secreted by a clever jewel thief in a supposedly perfect hiding-place.

The scripts were written by John Keir Cross, closely following the original stories of Sir Arthur Conan Doyle, but renaming some of them. The music for the productions was composed by Sydney Torch, with the famous violin cadenzas played by Alfredo Campoli. Other actors appearing included Robert Rietti, and John Gielgud's brother Val (later Director of Drama at the BBC), who played Mycroft Holmes. Orson Welles took the part of Professor Moriarty. Quite possibly other 'big names' on the BBC roster appeared in the series anonymously too.

This was fine if you just want to spend a half hour with Watson and Holmes, but the case was slight and the story was mundane. On another note, I found the violin theme really irritating after a little while.

I've listened to many hours of golden-age radio Sherlock Holmes (check out a podcast such as "The Great Detectives of Old-Time Radio"), and compared to the better episodes of those, this is weak sauce.