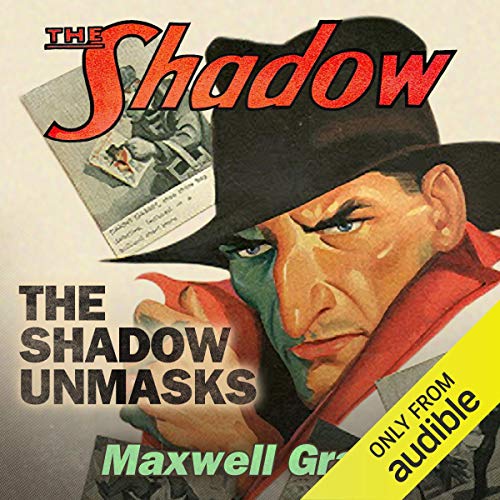 For the first time in his long career as a master crime-fighter, The Shadow thrusts aside his veil of mystery. Not under one of his many aliases, but in his true identity, The Shadow reveals himself. In this battle against the underworld, the unfathomable past of the man known as The Shadow is finally exposed.

A great look at the pulp of yesteryear

I have always loved the old Shadow radio.drama. I am glad that audible is taking the original pulp novels and dramatizing them. The tone and narration is spot on. AUDIBLE 20 REVIEW SWEEPSTAKES ENTRY

More Pulpy goodness from Audible and The Shadow

This is another of Walter Gibson's pulp novels featuring The Shadow to get the multicast treatment. With sound effects and music, this plays like a modern version of an old time radio show. This particular story is one of the most famous in the entire Shadow run as readers finally learn who The Shadow really is. This was very well done. I certainly hope these productions of classic pulp stories continue. While the material must be considered within the the framework of the time it was originally produced, the adventures are great fun. Who knows what evil lurks in the hearts of men? The Shadow (and Audible) knows!

Enjoyed the cast and the story

This was a fun read. The story was great and the voice cast was great. Do you need to do more of the stories like this about the shadow. Let’s bring them back in the spotlight in today’s media

Great performance of a classic pulp!

Great performance of the purest version of The Shadow! Much less gimmicky than the radio version of the character.

I have all of The Shadow titles released by Audible, but I need more! The full cast are my favorite, although they could punch it up with some more sound effects and haunting laughter. But all of these are classic tales that are a lot of fun, and over too soon.
More please!

The Shadow Unmasks is an entertaining mystery like all of the Shadow’s exploits. This particular story is the first time the dark avenger confides one of his most tantalizing secrets, his true identity. During an investigation into the affairs of a murdering gang of Jewel thieves, the Shadow’s incognito identity as Lamont Cranston is compromised when the real Cranston is injured abroad. Now the Shadow needs a new identity to continue his war on crime, and this time, he chooses his own.

Like with Partners of Peril before this, the full cast does a great job of bridging he gap between the entertaining, but cheesy radio show, and the grim subject matter of the books. Each character is well played and the actors lend vividness to their roles. The music and sound design also bring the action scenes to their full potential, and the jazzy music fits well with the style of this pulp classic.

I hope to see more of this series in the future as it is a part of super hero history that has been too long forgotten.