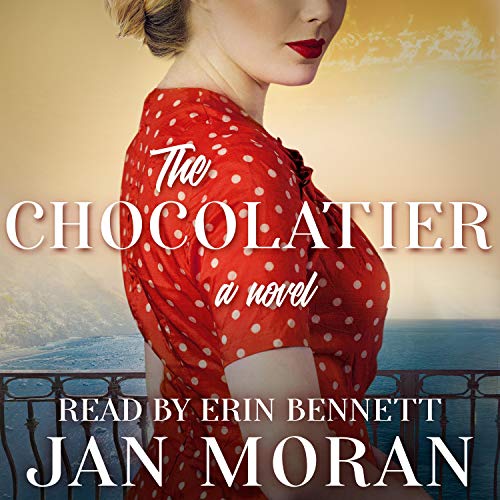 A young widow. A husband she thought she knew. On the picturesque Italian coast of Amalfi lies a chocolatier's destiny...

San Francisco, 1953: Heartbroken over the mysterious death of her husband, Celina Savoia, a second-generation chocolatière, resolves to take their young son to Italy's shimmering Amalfi coast to introduce him to his father's family. Just as she embarks on a magical, romantic life of making chocolate by the sea surrounded by a loving family, she begins to suspect that her husband had a dark secret - forged in the final days of WWII - that could destroy the relationships she's come to cherish.

While a second chance at love is tempting, the mystery of her husband's true identity thwarts her efforts. Challenged to pursue the truth or lose the life and those she's come to love, Celina and her late husband's brother, Lauro, must trace the past to a remote, Peruvian cocoa region to face the deceit that threatens to shatter their lives.

In The Chocolatier, Jan Moran, best-selling author of the contemporary Summer Beach series and the historical novels, The Winemakers and Scent of Triumph, from St. Martin's Press, offers a testament to the resilience of love, along with insights into the fascinating world of chocolate making. The Chocolatier is available in ebook, trade paperback, audiobook, hardcover, and large print editions. For readers of Danielle Steel, Renee Rosen, Chanel Cleeton, Susan Meissner, Barbara Taylor Bradford, and Gill Paul.

A solid pick for fans of historical romances combined with a heartbreaking mystery." (The Library Journal)

"A novel that gives fans of romantic sagas a compelling voice to follow." (Booklist)

"One chocolate truffle had changed her destiny. Indeed, it was one of Celina's best - a silky cocoa powder-dusted truffle filled with raspberry-infused dark chocolate ganache and enrobed with a couverture, a layer of rich chocolate that melted optimally with the warmth of the body.

After she had offered one to a weary, dark-haired soldier who had just returned from the European front, he introduced himself as Tony Savoia, an Italian immigrant whose family had owned and operated Cioccolata Savoia before war rationing had made sugar difficult to obtain."

And so the saga begins...give yourself the gift of The Chocolatier now.

Literary Fiction at its best!

Celina is a widow living in California with her young son. She does what she feels is right, and makes connections with her husband's family in Italy to let them know their son has died and that he left a son behind. And from there the story takes off. She is given tickets to fly to Italy with her son. Her parents-in-law are excited to meet her. Her brother-in-law is skeptical of her presence. The more they talk about her deceased husband and their deceased son, the more the pieces of the puzzle don't fit together. All of this is written against the the backdrop of the beautiful Italian countryside and the chocolate trade.

The narration is perfect for the story. Voices, accents, timing are excellent and make this an easy story to listen to and get lost in.
I am now listening to the story for the second time and knowing the end of the story allows me to catch so many hints at the ending throughout the book. I recommend listening to it not just once, but at least twice!

This was amazing, from the beginning to the end. One I begin listening to this audiobook the story grabbed me and I could not stop listening. Selina’s life is turned upside down since her husband passed away. She never dreamed of what would happened next in her life. All of her family had died but her mom had taught her how to make the best chocolates and this turns into her making a life for her and her small son. Once she had the strength to contact her late husband family, she had never met before of his death, more twist comes her way. The storyline has so many twist, turns and mystery you will have to listen until the end. The narrator of this wonderful story did an outstanding job preforming the role of so many characters. This is a must listen to story. Hope you enjoy his incredible book as I did.

Transparent characterizations, passion, romance, mystery and chocolate - and all in Capri, Italy.

Of course, it’s a great story!

Intriguing from Start to Finish

Who doesn't love a book about love & chocolate? This book was fun to listen to. It had all the elements a great book needs. love, intrigue,
mystery , & chocolate. I would like to see a sequel to this book based on the creativity of the their chocolate business's. Thank you for a fun & educational book Jan Moran.

You will be taken on a journey

I really enjoyed this book. The descriptions of food, landscape and feelings were not overdone but aroused the senses as though I were there. The descriptions of the chocolate were so meticulous that I could almost taste them. I really felt some commons with this book being from San Francisco with family in Naples Campania and a Dad who was called "Doc" in the Navy. Some of the book was predictable but some was not! The narrator was so good I tried to hear her voice when she did the men but I could not tell it was her.

A beautifully written historical romance. I found myself drawn into the story from the very beginning. The details and descriptions triggered fond memories of my past travels to both San Francisco and Italy.

I thoroughly enjoyed this presentation and will definitely be checking out more of Jan Moran’s writing and Erin Bennett’s narrations.

I really enjoyed the book especially because I’ve been to this part of Italy. However I thought it was longer than it needed to be but I enjoyed it anyway.

This was a good story with a lot of twists that will keep you guessing. Romance, mystery and chocolate...who could ask for more! Great narration. Overall, a very enjoyable listen!

I loved this story!! I was looking for a good read (or a good listen) with a good story. Oh was this the answer!!
The author makes you love the characters, love the chocolate and love Italy! I’ve visited the Amalfi Coast and this story brought back all sorts of fond memories!! If you’ve never visited the Amalfi area, this makes you feel like you were there anyway!
There is also a twist in the story that keeps you from putting this book down. I could hardly wait to see what was going to happen next.
Ohhh so good!!!
Thank you Jan Moran!
And Erin Bennett did a great job on the narration!

Enjoyed this book from cover to cover! Would highly recommend. Looking forward to more reads by this author