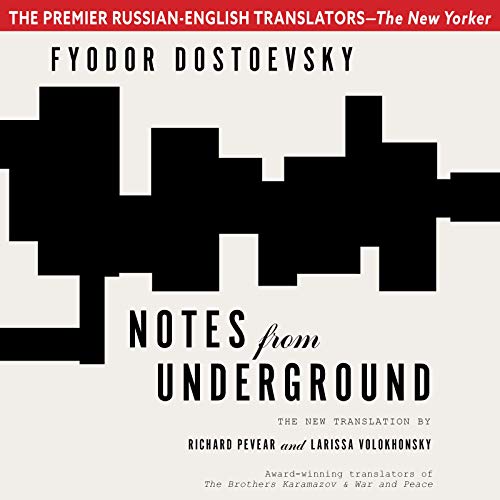 "Pevear and Volokhonsky may be the premier Russian-to-English translators of the era." (The New Yorker)

Dostoevsky’s most revolutionary novel Notes from Underground marks the dividing line between 19th- and 20th-century fiction and between the visions of self each century embodied. One of the most remarkable characters in literature, the unnamed narrator is a former official who has defiantly withdrawn into an underground existence.

In full retreat from society, he scrawls a passionate, obsessive, self-contradictory narrative that serves as a devastating attack on social utopianism and an assertion of man’s essentially irrational nature.

Richard Pevear and Larissa Volokhonsky, whose Dostoevsky translations have become the standard, give us a brilliantly faithful edition of this classic novel, conveying all the tragedy and tormented comedy of the original. This audio edition of Notes from Underground is the only recording of Pevear and Volokhonsky's translation of Dostoevsky’s classic work.

Richard Pevear and Larissa Volokhonsky’s masterful translation of Notes from Underground is destined to stand with their versions of Crime and Punishment, The Brothers Karamazov, and Demons as the definitive Dostoevsky in English. This audiobook is skillfully narrated by Peter Batchelor.