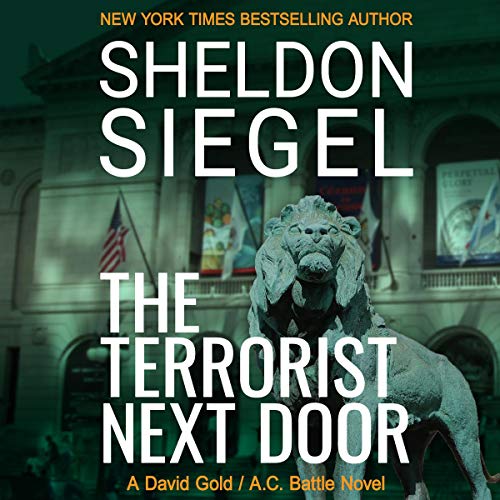 Meet Detective David Gold. He's a third generation native of hardscrabble South Chicago. He's also one of Chicago's most decorated homicide detectives. Meet Gold's new partner, Detective AC Battle. He's a native of Mississippi whose family moved to Chicago to escape the Jim Crow South. He grew up in the Robert Taylor Homes, the penal colony of high rises across the Dan Ryan Expressway from Mayor Daley's house and Comiskey Park. Here's their first challenge. More than a decade after 9/11, someone is setting off fire bombs in Chicago using untraceable cell phones. An unknown group takes credit for the bombings and demands the release of Hassan Al-Shahid, a University of Chicago graduate student whose plan to set off a bomb at the Art Institute was thwarted at the last minute by Gold and his long-time partner, Paul Liszewski. Their heroic efforts had cost Liszewski his life and put Gold in the hospital. Shocked and grieving, Gold rallies to receive a Medal of Valor on the steps of that same Art Institute. During the ceremony, a car bomb explodes across the street and moment later Gold receives a text: It isn't over. The FBI and Homeland Security believe the new bomber is a lone wolf. That makes him even more dangerous. More car bombs are detonated at the Wrigley Field El station, Millennium Park, the Museum of Science and Industry, O'Hare Airport, the Hyde Park train station, and the upscale Rush Street area near North Michigan Avenue. The bomber has shut down a major US city. Just to free Al-Shahid? Gold and Battle hunt him across Chicago's colorful neighborhoods: from the high rises of the Magnificent Mile to century-old churches where mass is still celebrated in Polish to the ivy-covered buildings at the University of Chicago to crumbling old synagogues and gritty seafood shacks next to the ghostly expanses of vacant land where the steel mills once stood.

The Terrorist Next Door is another of many novels that deal with terrorism from a "man bites dog" perspective. (In journalism, "man bites dog" concerns a counter intuitive and unusual situation that never happens.) In novels concerning terrorism man bites dog scenarios are now common. It is a cheap literary trick that is beneath the dignity of an author of Sheldon Siegel's talents.

I purchased this novel to complete my collection of Sheldon Siegel's novels. He should stick with legal thrillers. The Terrorist Next Door, released 4 years ago, was to be the the first novel of the Chicago police detective David Gold series. Tim Campbell's narration is stellar as usual for him.

Spoiler Alert: I am highly offended by the fact that this book portrayed an American hero as the terrorist, and his sole motivation was to make Muslims look bad. I understand not wanting to feed into the stereotype and have a Muslim as the terrorist, but this book could have been written with a different motivation and different villain and still had the same essential storyline. Our overseas troops make tremendous sacrifice and are too often portrayed as villains in fictional works. It's unearned and unfair.

Sheldon Siegel has switched venues and characters successfully in my opinion.
He is a master of relevant historical events and is capable of creating interesting characters and twists and turns in his stories to keep his readers’ attention.
Looking forward to Book 2 of this new series.

Too close to the last series

I love Siegel’s Mike Daley and Rosie Fernandez series so gave this new series a shot. I’m disappointed as it’s far too close to the first series for my liking. I was hoping for more originality.

Sorry Sheldon, The Terrorist next Door reads like the Florist Next Door. Slow paced, rambling and poorly narrated, this one was a real stinker. I wish I could get back all of my money, time and energy spent on this one. Sheldon, take a break, or better still brake before you touch the keyboard for a while...at least until you can come up with something way better than this abysmal effort.

I live in Chicago and love stories that involve the city, but at times this narrative felt like a mini-history lesson/travelogue. I also thought the story was incredibly contrived, and highly improbable. The narration didn't help the situation. I'll admit that I'm pretty picky about readers, and I normally enjoy listening to Tim Campbell, but he didn't do his homework before reading this one, because he mispronounced a number of words that any Chicagoan would know. (For example, Stroger Hospital is pronounced with a soft "g," not a hard "g.") He also needs to work on his Polish accent, because the character who was supposed to have had one sounded like he was part Spanish and part Russian - nothing like someone whose native language was Polish. An all around disappointment for me.

Siegel Hits it out of the Park

when I decide to spend time out of my life to listen to a story it has provide three things. It must enlighten the mind, to want to learn something, or things, that I am unaware of. Second, the narrator is as important as the writer in bring the words to life. So, I want to feel the authors characters animate with each breath of the reader. Finally, the journey must be worth the price of admition. I need to know that the precious seconds spent listening to the story are savoured and cherished. a lingering after shock of the eruptions of commitment. These commandments have been chiseled in stone in the Terrorist Next Door. Time well spent is time not lost.