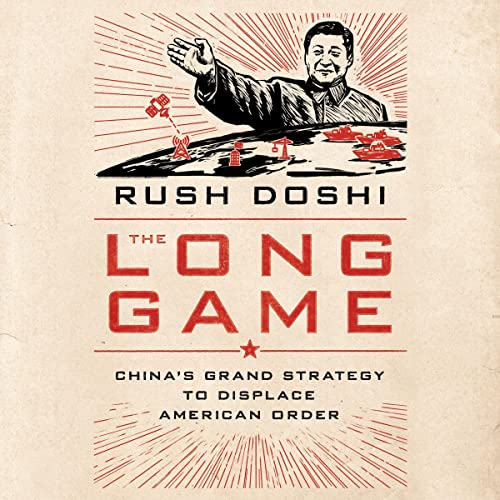 In The Long Game, Rush Doshi draws from a rich base of Chinese primary sources, including decades worth of party documents, leaked materials, memoirs by party leaders, and a careful analysis of China's conduct to provide a history of China's grand strategy since the end of the Cold War.

Taking listeners behind the Party's closed doors, he uncovers Beijing's long, methodical game to displace America from its hegemonic position in both the East Asia regional and global orders through three sequential "strategies of displacement." Beginning in the 1980s, China focused for two decades on "hiding capabilities and biding time." After the 2008 Global Financial Crisis, it became more assertive regionally, following a policy of "actively accomplishing something." Finally, in the aftermath populist elections of 2016, China shifted to an even more aggressive strategy for undermining US hegemony, adopting the phrase "great changes unseen in century."

After charting how China's long game has evolved, Doshi offers a comprehensive yet asymmetric plan for an effective US response. Ironically, his proposed approach takes a page from Beijing's own strategic playbook to undermine China's ambitions and strengthen American order without competing dollar-for-dollar, ship-for-ship, or loan-for-loan.

Over the past few weeks, I've read The Hundred Year Marathon (by a retired senior spy), The Third Revolution (by a leading academic), Superpower Showdown (by a pair of US and Chinese journalists) and China-US Relations In The Eyes Of The Chinese Communist Party: An Insider’s Perspective (by a defector). It was all starting to get pretty repetitive but I was blown away by The Long Game, with its original approach using textual sources, and its approach of analysing the grand strategy. Somehow it was able to turn something as dry as old speeches and documents into an exhilarating read by drawing out the intentions behind the words. I highly recommend this book, with the caveat that it does get a bit repetitive in parts (could benefit from some editing) and it might be a little dry for people who are not military or foreign policy junkies.

A compelling argument for China's modern/recent activities and future intentions, this book weaves together many perspectives with plenty of evidence supporting China's goal to replace to US as the dominant power in the global hierarchy.

The argument is well constructed but the book is too long. Author hits his points so heavily that you can get bored and ready for him to move on. For example, he quotes leaders saying assissins mace for several pages. One time with stats would have been enough. The three phase argument is very helpful to understand the policy evolution. The story about the ukrainian carrier was also fascinating.

This author is obviously incredibly knowledgeable about the topic and has important perspectives to share. But the book reads like a college text…..the three classifications of this, the four theories of that, the six components of the other thing, OMG, could you have a woven a little bit of a story flow into this to make it interesting? Consider some dramatic tension? We are talking potential war here.

It's so thorough and detailed, that I needed breaks while listening to it

Also, the narrator pronounced Chinese names as bad as it gets

endlessly repeating same phrases and concepts while extracting conclusions from speeches and open publications does not convince the reader that what suppose to be a meditated strategy is not a simple self defence approach of China's leaders...
Disappointing

Because the author continuously repeated himself the message was long, tedious, and boring. Don't buy.

A truly important book with one problem

The book was everything I had expected it to be. Excellent. However, how is it possible that no one thought to provide the narrator with phonetic spellings of the Chinese names? It’s not his fault but the pronunciations were awful and that is just inexcusable forgot a book like this in the day and age. It was so distracting to hear each Chinese name mispronounced to the point of absurdity. Again, I don’t blame the narrator rather it’s the publisher and producer who somehow think this is OK which is disappointing.

Provides eye opening clarity on the passions, paranoia, and motivations behind China’s leadership. Exceedingly well researched and argued.
With the context the book provides, PRC MFA press conference statements make a lot more sense, as do BRI, wolf warrior diplomacy, and so much more. This is a must read!
The narrator’s Chinese pronunciation may hurt your ears, but it generally improves towards the end of the reading.

The overall content of the book is quite interesting and well-documented.

The production of the audiobook is disappointing. Apart from the monotonous « lecture », it’s unbelievable to launch a 18h audible about the Chinese Communist Party with the reader mispronouncing the name of 3 of the 5 chairmen.

Having read a few books on China's Grand Strategy, this may be the most objective, but perhaps not the most broad ranging.
Doshi bases much of his book on the strategic realignment stemming from the Trifecta of events, Tiananmen in 1989, Gulf War 1 and the Collapse of the Soviet Union. Changes unseen in a century, as is frequently reiterated.
A central problem with this book is the repetitive nature, and the repeat of the phrase "changes unseen in a century" sometimes had me literally screaming.
However, a decent book overall and an objective way to understand China's financial and military strategy.

A text book.. Not a bòk to.read

An importantabt book to study. impossible to enjoy from listening, but compulsory study text gor government.

This is a very interesting and important book. The scope of its analysis is impressive. However the listening is monotone and the text is oddly repetitive.

Be prepared to hear a thesis of the shaping of the modern world, hidden beneath hearing the exact same ideas over and over and over.

Fascinating (but needs an editor)

This is the result of an impressive piece of scholarship and has many great insights.
There is, however, far too much repetition - especially of CCCP slogans. I was almost hypnotised by the chanting. And unfortunately the halting narration made the style even worse.
This book really needs a good editor. It could be great.