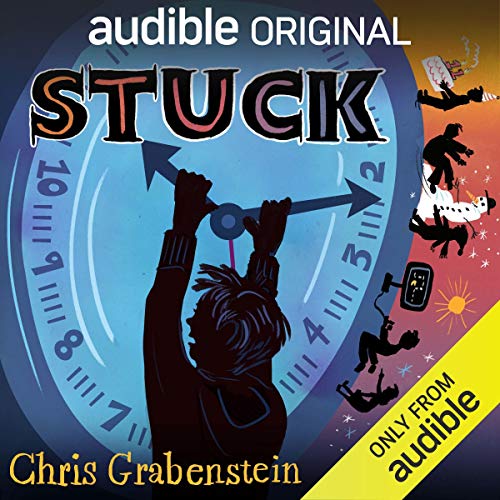 On his 11th birthday, Jackson is nervous about moving up to middle school where he knows he'll be bullied by older kids, so he makes his wish, "I don't want to grow up!" When his 12th birthday rolls around, he discovers his wish came true: he's still 11, and he’s starting fifth grade (again). At first, this is the perfect life. Jackson is the smartest kid in his class, the best on his baseball team, and the star of the school band. But after a few years of being 11, he realizes his life is passing him by. His little sister is suddenly his big sister, his former friends are driving, everyone else is growing older but he's still living the same fifth grade life. Will Jackson ever figure out how to grow up or will he remain Stuck?

It was a good book, but some references like “what a stupid name, prisha,” and the imitation of Indian accents bothered me. My parents migrated to America from India therefore I am Indian American. These just really bothered me but otherwise it’s a good book!

A great listen for the whole family

Stuck is an absolute delight. Following Jackson as he hangs back year after year trying to avoid bullying and the stress of moving on to a new school will keep anyone entertained and interested. The characters are all engaging and entertaining.

This story and performance is really good for all audiences. If you are getting ready for a road trip with the kids or grand kids, Stuck is an excellent choice.

An annoying story line that draws in the author’s view of how kids talk, I couldn’t get past the terrible dialogue.

I purchased this for my son to listen to and he enjoyed it very much. Super appropriate for his age and the multiple voices characters and sound effects kept him interested.

Chris Grabenstein's books are always wacky. This Audible Original is superb. I enjoyed immensely. It causes me to want to go back and listen to some of Grabenstein's John Ceepak mysteries.

Be careful what you wish for...

My family listened to this in its entirety while traveling yesterday. This included my 75 yo dad and 3 kids (13, 9, and 6). We all enjoyed the story and the twist with Prisha at the end. It was a fun short story and had everyone engaged. Be careful what you wish for.

This month’s Audible freebies are really knocking it out of the park for zippy, fun listens that also painlessly sneak in life lessons and deeper meaning. The narration is excellent here, fitting the tone of an 11 year old Jackson who finds himself reliving the year, and the 5th grade, over and over again, while the rest of the world moves on. Time travel plots often give me a headache, but this one went down easy. The only cultural/religious aspect to this book is the Hindu concept of nonlinear time. This book is free of politics, sex, and profanity and contains mild treatment of bullying, aging, and death. I find it perfect for kids 10 and up.

My favorite part is the changing slang as time moves forward. I’m going to start working “it’s the stuffed potato” into my catch phrases, because “it’s the bees knees” really makes no sense.

Really enjoyed this listen!! Good story and great characters!! Perfect for a short story for a trip

It was so awesome

It allow me to use my imagination and there were all of characters. It was also short and easy to listen too.