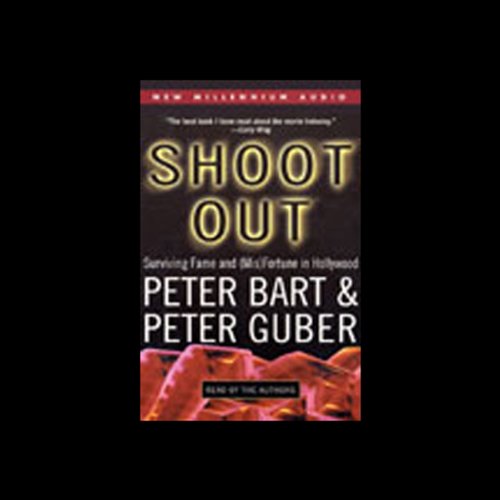 Hollywood thrives on shoot-outs - that series of standoffs, skirmishes, and power struggles that mark every stage of the filmmaking process. Whether it is a director insisting on a final cut, a star demanding a bigger motor home, a producer holding the line on a budget, or a grip with a gripe, it seems that the world of moviemaking is nothing but Sturm und Drang. All for the sake of control over a few flickering images on a silver screen.

Fundamentally, Shoot Out is about how movies get made. It covers the process from the first pitch to the final cut, and the players from writers, producers, and directors to stars, agents and marketers. And in the hands of two of Hollywood's best-known pundits, Peter Bart and Peter Guber, the story of Hollywood yesterday, today, and tomorrow is told with rare insight, intelligence and candor.

Together Guber and Bart run one of the most popular courses at UCLA, which inspired them to write ShootOut. Every year they invite industry personalities to participate in their program, and it is the stories from these luminaries - as well as the authors' personal adventures - that animate their book.

For film buffs, aspiring filmmakers, students, and anyone else intrigued by the inner workings of Hollywood, this is the quintessential take on the how, who, what, and why of the film business.

I should first say that I'm not a Hollywood professional (or even an intern at the moment). I'm a student.

Anyhow, for all that I can tell, this is an excellent book that actually feels enhanced in audio. Both authors do an excellent job in the reading and everything comes out clear in content and mood.

The book itself paints a fairly vivid picture of various aspects of the film industry, past and present. Conveyed is the chaotic nature of the Hollywood beast, some generation gaps and changes in the structure of the Hollywood system, and some of the deals behind the scenes that have led to successful films and dismal failures.

I definitely recommend this audiobook to anyone curious at all about Hollywood or the commercial film industry.

The writing is sometimes inconsistently paced, but the stories fromt he inside of Hollywood are entertaining and insightful.

Well worth the time to hear.

from the mouth of legends

Good Thing They Got Their Money Up Front

What would have made Shoot Out better?

Pomposity has never appealed to me, nor has freshman English compositions and this book falls somewhere between the awful two. They had a story but they didn't know how to tell it and it fell flatter than a Katherine Heigl movie. Ugh. If they had loosened up and just told the story.

Has Shoot Out turned you off from other books in this genre?

No because I love books about film and filmmaking.

Would you be willing to try another one of Peter Bart and Peter Guber ’s performances?

Absolutely not. Let them stick to being "film executives" or whatever title they employ currently.

If you could play editor, what scene or scenes would you have cut from Shoot Out?

It needed a complete re-write and they didn't do that or, if they did, who the hell was their editor for this?

I think I've said it all.

I enjoyed this book. As a fan of film it was interesting to get some insights from two of the industries best. The mutliple narration seemed to keep it fresh as well. Worth checking out if you love some good old Hollywood stories.

Shoot Out. One of the worst Audibles

I white knuckled through about and hour of this book. The authors talk so fast that I can not understand anything!! They also have some kind of speech impediment. Total waste of money!! I wish there was some below one star!

One of the better books on movies I have read.

This is first hand history, success and failure, from the mouths of Peter Bart and Peter Guber. While they have not made the greatest films ever, they have had quite a run, and this is a great history of it.

DON'T DO IT, BORING

Unfortunately, the descriptions of this book are very false. It was a waste of a credit and I regret it.