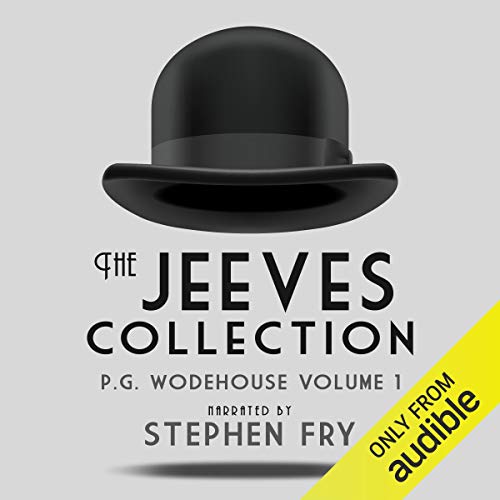 “I have the honour to offer up to you, thanks to the good people of Audible, a selection of some of my very favourite Wodehouse. If these stories are new to you I hope it will be the beginning of a lifelong pleasure, if some or all are familiar I hope you will welcome them like old friends.” (Stephen Fry)

Audible Studios presents this brand new performance by Stephen Fry of some of his favourite Jeeves stories from P.G. Wodehouse, with an exclusive introduction.

A classic collection of 11 stories featuring some of the funniest episodes in the life of Bertie Wooster, gentleman, and Jeeves, his gentleman's gentleman - in which Bertie's terrifying Aunt Agatha appears, seeking whom she may devour, while Bertie's friend Bingo Little falls in love with seven different girls in succession (including the best-selling romantic novelist Rosie M. Banks). And Bertie, with Jeeves's help, hopes to evade the clutches of the terrifying Honoria Glossop.

10 more marvellous stories introduce us to Jeeves, whose first ever duty is to cure Bertie's raging hangover ('If you would drink this, sir...it is a little preparation of my own invention. It is the Worcester Sauce that gives it its colour. The raw egg makes it nutritious. The red pepper gives it its bite. Gentlemen have told me they have found it extremely invigorating after a late evening.')

The Code of the Woosters

The third full-length novel to feature Bertie Wooster and his valet Jeeves. It introduces Sir Watkyn Bassett, the owner of a country house called Totleigh Towers, where the story takes place, and his intimidating friend Roderick Spode. It is also a sequel to Right Ho, Jeeves, continuing the story of Bertie's newt-fancying friend Gussie Fink-Nottle and Gussie's droopy and overly sentimental fiancée, Madeline Bassett.

Joy in the Morning

Bertie is persuaded to brave the home of his fearsome Aunt Agatha and her husband Lord Worplesdon, knowing that his former fiancée, the beautiful and formidably intellectual Lady Florence Craye will also be in attendance.

Stephen Fry is an English actor, screenwriter, author, playwright, journalist, poet, comedian, television presenter, film director and all-round national treasure. Whilst at university, Fry became involved with the Cambridge Footlights, where he met his long-time collaborator and friend Hugh Laurie. As half of the comic double act Fry and Laurie, he co-wrote and co-starred in A Bit of Fry & Laurie and Jeeves and Wooster. Fry’s acting roles include Blackadder, Kingdom, Bones, V for Vendetta, Sherlock Holmes: A Game of Shadows and The Hobbit trilogy. He has written and presented several documentary series and as a proudly out gay man, the award-winning Out There, documenting the lives of lesbian, bisexual gay and transgender people around the world is part of his 30-year advocacy of the rights of the LGBT community. Fry has written four novels: The Liar, The Hippopotamus (made in to a feature film in 2018), Making History and The Stars’ Tennis Balls. Translated into many languages, they have never been out of print. The most recently published works are Mythos, Heroes and Troy, a trilogy retelling the Greeks myths from the Creation to the aftermath of the Trojan War.

I am enjoying this book a great deal, and actually not at all minding that Fry is automatically linked with Jeeve's role. Even as Wooster, he's great. I would like it, however, if Hugh Laurie, AKA Wooster, would read vol. 2 of this project, to make it a set!

Where is the second volume

Top! Best story to pass through my wireless earphones.

Mr S Fry is without a doubt a great narrator and storyteller. Laughed my heels off.

When can we expect Volume 2!

Stephen Fry is the perfect narrator for Wodehouse. His love for the author and the language shines through and makes this audiobook a delightful experience.

A wonderful collection of one of my favorite authors by my favourite narrator. Thank you for the laughs Stephen Fry - The Inimitable Jeeves.

Well now. I’m running the risk of being pilloried here, but if the books were narrated by Jeeves, Fry would be perfect. However, Wooster Is a young, fast talking ‘nice but dim’ narrator.

Sorry folks, but a rare miscasting for the great man. Maybe it will grow on me, but I would recommend Jonathan Cecil, who is perfect in his readings.

The books are, of course, brilliantly funny.

Wonderful reading by Mr Fry of these eternal classics. However, Audible, why not provide more details on chapter and book titles!!! 96 bald chapter numbers doesn’t help when losing one’s place!

I was a big fan of Stephen Fry's reading of the Sherlock Holmes stories, and love Wodehouse so this seemed like a natural "must-buy". Sadly it's not a patch on that audiobook for several reasons.

The first is that there are already some excellent Jeeves versions on Audible, none better than those narrated by Jonathan Cecil. While Fry is amazing, the older versions are pretty unassailable in their conveyance of the wit of Wodehouse.

Another gripe is the poor structuring of the audiobook. There are no titles, and there are so many stories it's hard to track down one's favourties. Also, they omit to inlcude Carry on Jeeves for some reason.

I know Fry loves Wodehouse, indeed, I came to Audible following a talk he gave on him some years ago, but this is disappointing.

Some other review said the same, but it's worth mentioning again.
Fry is a tremendous narrator. He's a superb Jeeves. He's not quite a Bertie Wooster. Hugh Laurie is a superb Wooster. Quickly spoken with a very melodic way of emphasising the right words spoken by Wooster.
It's only an example because I love Stephen Fry and this book is worth every penny. That said there's versions on Audible by Jonathan Cecil that deliver Wooster more like I hear him in my head when reading the books myself.
It's a niggle for me because I've read some of the books. If you haven't, this book here is still brilliant. It's read by a man that loves what he's reading and what he's doing.
Its 40+ hours of Wodehouse read by Fry!! That's never bad, let's face it.

The stars have aligned!

P G Wodehouse, Jeeves and Wooster, Stephen Fry. What else do you need to know? Perfect.

Lovingly performers with such aplomb

Nothing can equal the Briers dramatisations

I have enjoyed Mr Fry's great rendition of Sherlock Holmes. My hopes were raised when I spotted this Jeeves recording - and what a bargain for one credit. But as always with any Jeeves performance I am disappointed, simply because I have previously listened to the great Richard Briers radio dramatisations from the 1970s (almost all of which are available on Audible at a similarly bargain price).
I think Wooster is harder to play than Jeeves because Jeeves is restrained and somewhat lugubrious, while Wooster's manic behaviour can easily result in overacting in a reading/dramatisation. Hugh Laurie I found utterly unconvincing because I believe he fell headlong into that trap. Briers played the part perfectly, with apparently never even a hint of ham.
Mr Fry does not overegg Wooster in this recording, but I believe - dare I say it - that Mr Fry is too old for the part. Mr Fry was about sixty-three when he made this recording, while Wooster is an exuberant whippersnapper in his twenties. Mr Fry's rendition of Holmes did not suffer from the age difference because Holmes often seemed almost ageless.
I will of course hold on to this purchase and listen to it more than once, given my enjoyment of almost any performance by Mr Fry.

From time to time I have found Stephen Fry a bit irritating on TV, but here he is nothing short of brilliant. The voices timing and pacing are all just superb. I've listened to Wodehouse and the Jeeves stories read by many different readers over the years and Fry is better than all of them, even Martin Jarvis, although Johnathan Cecil runs him close

good old PG - he simply evokes such innocent fun and Stephen Fry's wonderfully rich fruity delivery is perfect.
if I want to put myself in a good mood, I shimmer over to the jolly old entertainment cabinet, splash on the earmuffs and wrap myself in the comforting blanket of Wooster's world

One probably needs to be a lover of Wodehouse. This was my first try at listening to the Jeeve's collection and I wasn't overly impressed. The narrator wasn't good and there were too many "I saids and she saids" which grated after a while.

These stories are hilarious and Stephen Fry narrates them beautifully. It is amazing how well the Jeeves and Wooster stories have aged - light, clever fun.

Stephen Fry,
Thank you so much for your rendition of P.G. Wodehouse I couldn’t stop listening.

I kept seeing the personages performing before me.
Louise thomson

This was my first audiobook as an adult and I thoroughly enjoyed this introduction to Wodehouse.

No better narrator for this than Stephen Fry.

A vintage trope, but great writing and Fry brings the optimum voice and manner. A little farcical at times, but overall it paints an entertaining, if narrow, picture of the English in times gone by.

Terrible narration compared with Martin Jarvis. Narration bland and one dimensional sounded like S Fry playing a one string guitar

Wodehouse and , especially, Jeeves and Bertie Wooster, need no introduction from me but if anyone can improve the experience of reading the books, it is listening to Stephen Fry.

Jeeves in full flight as read by Stephen fry.

Jeeves has always sounded like Stephen fry, in my minds ear/ eye. Thoroughly enjoyed the lilt of language from another age. Sagacity and humour combined in a Confucian display.

I loved every sentence of this collection. Wodehouse is the greatest and Frye is the perfect accompaniment.

Absolutely love this, very entertaining. Stephen Fry had me lost in a different time. Most enjoyable.

The best humurous omnibus to in my opinion. A must read for Al Wodehouse fans. Really great value.