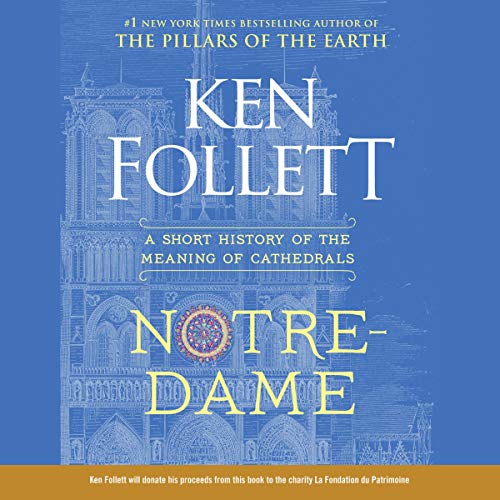 "Follett knows a thing or two about medieval cathedrals, having structured his Kingsbridge series around the building of one such architectural wonder.... Fans of Follett and cathedrals alike will enjoy his exploration of the great Parisian edifice - and will want more." (Kirkus starred review)

"The wonderful cathedral of Notre-Dame de Paris, one of the greatest achievements of European civilization, was on fire. The sight dazed and disturbed us profoundly. I was on the edge of tears. Something priceless was dying in front of our eyes. The feeling was bewildering, as if the earth was shaking." (Ken Follett)

In this short, spellbinding book, international best-selling author Ken Follett describes the emotions that gripped him when he learned about the fire that threatened to destroy one of the greatest cathedrals in the world - the Notre-Dame de Paris. Follett then tells the story of the cathedral, from its construction to the role it has played across time and history, and he reveals the influence that the Notre-Dame had upon cathedrals around the world and on the writing of one of Follett's most famous and beloved novels, The Pillars of the Earth.

Ken Follett will donate his proceeds from this book to the charity La Fondation du Patrimoine.

Narrated by the author, this informative piece is a primer on what a Cathedral is and what is required to build one. It was a wonderful way to make a donation to the reparations of the historic Notre-dame Cathedral.

Having been to Notre Dame shortly before it burned, I to was very sad to see it on fire. I found the early history very intersting as well as the period during WWII. Hope to go back when restoration is complete.

Absolutely enjoyed this book. A masterpiece, a work of art. I only wish it would go on...

Fascinating. Thoroughly enjoyed the history lessons over the course of time. Would most definitely recommend.

Ken Follett is one of my favorite authors and I loved his novel, "Pillars of the Earth." In this short book written after the burning of Notre-Dame, Follett talks about his love of and research about cathedrals. I enjoyed Ken Follett's reading of the audio version of this book.

History and importance of Notre Dame.

KEN Follett wrote a beautiful history of Cathedrals and Notre-Dame in particular. As someone who loves history, this spoke to me! It also reminded me of being Notre-Dame with my parents and my brother (and a friend who was like a brother!) in 1987. Amazing memories, but also sparked my love of Cathedrals!! While I was living in England in 1990-1991, I spent many hours in the cathedrals, but in particular the Durham Cathedral. I connected spiritually with it, and historically too! This short Novella reminded me of all that connects my heart to those awesome and beautifully crafted buildings!
Thank you Mr. Follett for this reminder!