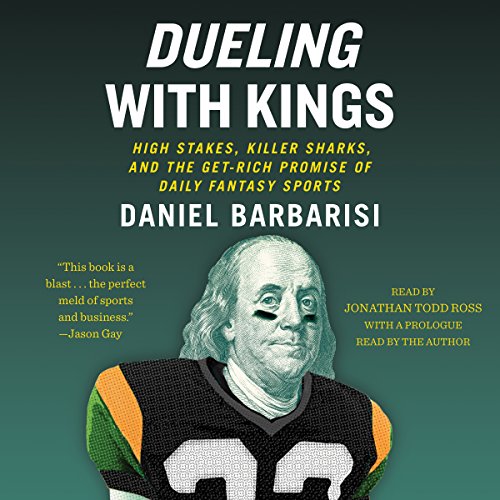 As Bringing Down the House did for card counters and Positively Fifth Street did for poker players, Daniel Barbarisi does for Daily Fantasy Sports fans in this leap down the rabbit hole of America's latest obsession.

Daniel Barbarisi quits his job as the New York Yankees beat writer for The Wall Street Journal and begins a quest: to join the top 1 percent of Daily Fantasy Sports ("DFS") players, the so-called "sharks", and figure out whether DFS is on the level - while maybe cashing in along the way.

DFS is fantasy sports on steroids. It's the domain of bitter rivals FanDuel and DraftKings, online juggernauts who turned a legal loophole into a billion-dollar industry by allowing sports fans to bet piles of cash constructing fantasy teams.

Yet as Barbarisi quickly realized, what should have been a fun companion to casual sports viewing was instead a ferocious environment infested with sharks, a top tier of pros wielding complex algorithms, drafting hundreds of lineups, and wagering six figures daily as they bludgeon unsuspecting amateur "fish". Barbarisi embeds himself inside the world of DFS, befriending and joining its rogues' gallery as he tries to beat them at their own game.

In a work equal parts adventure and rigorously reported investigation, Barbarisi wades into this chaotic industry at the very moment its existence is threatened by lawmakers sick of its Wild West atmosphere and pushy advertising. All their money made FanDuel and DraftKings seem invincible; but, as Barbarisi reports, they made plenty of dubious - perhaps even scandalous - moves as they vied for market supremacy.

In Dueling with Kings, Barbarisi uncovers the tumultuous inside story of DFS, all while capturing its peculiar cast of characters, from wide-eyed newly minted millionaires to sun-starved math geeks to bros living an endless frat party of keggers and Playboy bunnies. Can he outwit them all and make it to the top?

Great view of the DFS industry

What did you love best about Dueling with Kings?

The performance and the story was compelling. A lot of books on DFS tend to be a little dry. Although was not heavily strategy focused, the story and performance kept me interested. Great ending too.

That the writer goes through a lot of the same feelings that every DFS player that started off in this industry has felt, and gives great insight to some of the personalities and the DFS scene and community.

Not to spoil it, but the ending is great. It is very well written.

Either "Beep, Beep, I'm a Jeep", "The story behind the Draftkings commercial that annoys everyone so much", or "Your average sucker can win in DFS if they have the right connections"

Just a very entertaining book with great story telling, a little light on the strategy portion, but gives good background and insight on DFS.

I thoroughly enjoyed this book! It raised the curtain on an industry I only thought I knew. As a sports fan and dfs player, I loved it.

I enjoyed this history of DFS success stories. It was entertaining and inspiring to listen to these people getting rich playing a game.

Great history and overview of the birth of DFS!

The story told gives you great insight to the life of a DFS player and where the industry was born.

A Tale of Two Stories

I listened to this book start to finish at work in one night.

Story one: The battle to keep DFS legalized in crucial sports markets around the country. The backstory of DFS and many of its key players and founders. The personality that revolves around DFS.

Story two (my favorite): The author’s journey from being a DFS “Fish” to becoming a DFS “Shark”.

My time and ears and brain were raped (for lack of a better term) with all the parts about the legal history of the industry but everything else was interesting. Almost nobody would choose to read a book about that but it was forced in anyway.

Also it seems disingenuous to imply Dan went from beginners luck to very bad to very good and continually winning and successful and then just quit to not have a gambling problem. There was obviously a lot of losing near the end as well. If food was categorized as a drug, he wouldnt stop using it just because it was a drug. It doesn't have the same negative aspects as drugs. Just like strategically utilizing some gamble advantage to win consistently isnt the same as losing a lot by problem gambling negative ev games with poor money management.

Still a good book though and it is great to hear all the familiar names from twitter, youtube and elsewhere be name-dropped and used as characters. Very entertaining.

Daniel is a great story tale had a great time listenning to his adventure, also, gives you an insight into pro gamplers world which is interesting.

Saw Mr. Seige tweet about how instead of playing a 3 game NBA slate, invest the time and money into reading this book. Learned a tremendous amount and now want to read all DFS related books. If this guy (author Barbarisi) can do it, why can't I. Correlation and stacking, Excel skills, statistics and mathematics. Sweat the games. it can be done. And no Mr. Barbarisi, if you're good at it then it's not a gambling problem.

I didn't realize how entertaining a book about dfs could be but I couldn't stop reading.

A one day listen!

wow how it broke down the whole Fan Duel daily fantasy sports world.

An interesting perspective on an amazing industry

As an employee of FanDuel it’s great to read about the history of the industry you work in day on day. Should be mandatory for all new staff lol