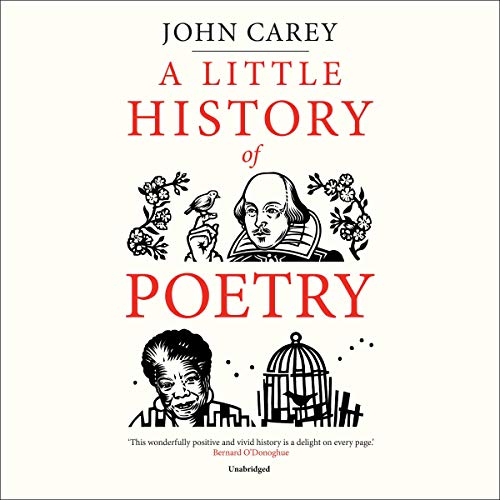 A vital, engaging, and hugely enjoyable guide to poetry, from ancient times to the present, by one of our greatest champions of literature

What is poetry? If music is sound organized in a particular way, poetry is a way of organizing language. It is language made special so that it will be remembered and valued. It does not always work - over the centuries countless thousands of poems have been forgotten. This little history is about some that have not.

John Carey tells the stories behind the world’s greatest poems, from the oldest surviving one written nearly four thousand years ago to those being written today. Carey looks at poets whose works shape our views of the world, such as Dante, Chaucer, Shakespeare, Whitman, and Yeats. He also looks at more recent poets, like Derek Walcott, Marianne Moore, and Maya Angelou, who have started to question what makes a poem “great” in the first place. This little history shines a light on the richness and variation of the world’s poems - and the elusive quality that makes them all the more enticing.

A Little History of Poetryに寄せられたリスナーの声

Despite providing a sky high overview of the history of poetry, this book does include many small, fascinating details about the lives of some of the greatest poets the world has ever known.

However the perspective is quite Eurocentric. I was very disappointed in the disproportionate amount of time spent on male English poets versus everyone else. Just two minutes dedicated to the great Maya Angelou.

I did enjoy the historical and political context provided in framing contributions to the world body of poetry.

This audio-book is spread so widely and thinly it becomes transparent.
There is no cohesive narrative. The content is a name-checking exercise with occasional quotes and an abundance of irritating date references. It is carefully edited to ensure full compliance with the woke movement.
A final moan; Oscar Wilde is described as a British poet. This grated. He was born in Dublin (Ireland). He is an Irish writer. The British may have claimed the boxer Barry McGuigan, but they are not getting Oscar as well.

Nothing too fancy, but short chapters give a clear account of the great poets of different periods and movements.

As that great poet Ron Seal famously put it "It does. What it says. On the tin."

An enjoyable race through (mostly) English poetry. I'd have preferred more quotations though. Something of a menu to make you start reading the poets in depth...

I don't have any specific complain. This content is probably not best in audiobook format. I'll try it as a reading book some day. For now, I didn't finish it.