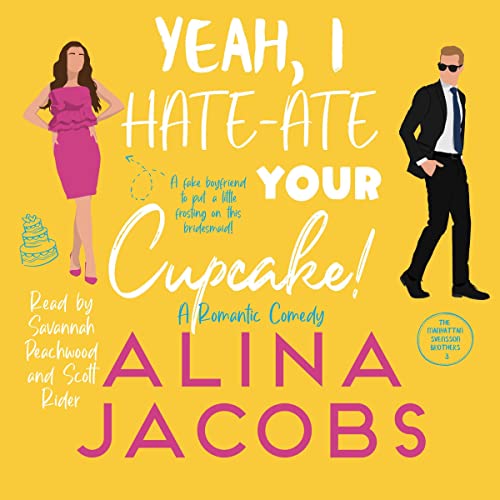 Yeah, I Hate-Ate Your Cupcake!

In my defense, my twin sister is engaged to the love of my life.

Ok, so he’s my ex of two weeks, but I have totally been in love with him since we were kids!

Guess he wanted the pretty twin. *shrug emoji* What else is new in my life?

They decided to break the news to me in a public place.

Probably because they thought it would keep me from losing it.

Ha! I am the queen of humiliating experiences.

Yelling, “Hey, bitch!” to a girl I thought was my bestie but was just a random stranger? Yup.

Spilling a smoothie all down my shirt in front of a hot guy? Check.

Awkward jokes at a job interview? Have you even met me?

Instead of handling the bad news maturely, I lied that I was totally A-OK with being the maid of honor at those lying cheaters’ upcoming nuptials because I already had a boyfriend, thank you very much.

Then I promptly grabbed an unsuspecting handsome billionaire and begged shamelessly for him to pretend to be my boyfriend. He, of course, reacted with horror because my life is so not a romantic comedy.

Most humiliating moment ever.

Actually, no, scratch that: the worst moment was later that evening, when I got arrested breaking into said billionaire’s office.

And since the universe really had it in for me (could also be terrible decision-making skills on my part, but who’s counting), things really took a turn for the worse when the handsome billionaire told me he was willing to make a deal....

And be my fake boyfriend.

Liam Svensson had a sexy smile, a deep sexy voice, and an even sexier body underneath that custom suit.

Saying he was out of my league would be a huge understatement.

What did he want?

Except why was he looking at me like he could cover me in frosting and eat me up?

And why did I want to risk it all and say yes?

This is a stand-alone, full-length laugh-out-loud romantic comedy, complete with the Queen of Awkward, who will make you feel better about that cringey joke you told at the last company happy hour, a hot guy with a wicked tongue (for jokes and—ahem), and a happily ever after better than a cupcake with extra sprinkles!

Alina has delivered another fantastic romantic comedic story. If you like sassy girls and hot men this is a great one. Every time I read another story it’s better than the last one. Can’t wait for more.

An odd situation may lead to love.

What starts as an odd situation may be exactly what you need.

I loved this story. It was entertaining and enjoyable even with the drama, angst, and multiple wedding shenanigans. The characters were interesting and likable for the most part. Roberta and Marcus were really perfect for each other. Karlie did take a long time to realize that Marcus was lame and not worth her dedication. Gran was absolutely amazing. She cracked me up so much. Liam was a sweetheart but had some issues that he needed to deal with. He had a great sense of humor and seemed very easygoing. Liam’s relationship with his sister Kiki was adorable. Karlie and Liam were great together. They each had things to work through but it was easier for both of them when they worked on them together. I loved how the story ended. I recommend reading this book.

Least fav book for these brothers.

Okay lets start with Carly. She was a doormat. She let anyone and everyone walk all over her and talk down on her. I was so aggrivated with the way she let her own mother and sister talk to her and I found myself shaking my head so often. Also, she was always so quick to forgive, EVERYONE!!! Her "friends" her SISTER her MOTHER, freaking LIAM!! I was done with her about half way through]
Liam... Super swoony. But lied through his teeth so many times when the damn truth could have fixed so many problems early on. This one just wasn't for me due to the FML being shallow, and letting literally everyone mistreat her.
I do love this series and will continue to listen to it and their spin off's. This one just wasn't for me.