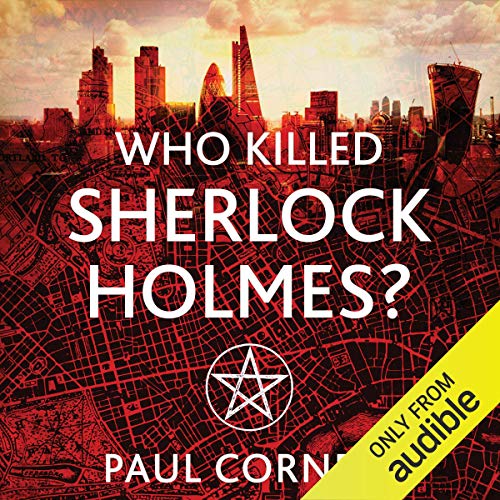 The ghost of Sherlock Holmes is dead, but who will solve his murder?

The Great Detective's ghost has walked London's streets for an age, given shape by people's memories. Now someone's put a ceremonial dagger through his chest. But what's the motive? And who - or what - could kill a ghost?

When policing London's supernatural underworld, eliminating the impossible is not an option. DI James Quill and his detectives have learnt this the hard way. Gifted with the Sight, they'll pursue a criminal genius - who'll lure them into a Sherlockian maze of clues and evidence. The team also have their own demons to fight. They've been to hell and back (literally), but now the unit is falling apart....

Good story, but not a stand-alone

I understand why people who haven't read/listened to the other novels in this series didn't like it. If you haven't listened to the previous volumes, don't start here. It won't make any sense. But personally, I like that Cornell didn't waste my time repeating previous stories or reminding me who is who. I usually find that tedious in books in a series.

With that out of the way, I'm enjoying the Shadow Police. I like all the characters, I like their ops boards and police procedures. And I like that they don't have super powers, other than being able to see magic. Or London stuff, as they call it. I particularly liked this volume because of the Lofthouse segments and the back story on the previous team.

I have now listened to all three of Damien Lynch's "Shadow Police" books and this review is a touch upon the whole series.

I enjoyed the first two books, but they were not great. They were good. Within the genre, modern London, magic and detection, of which there are several writers, the theme underlying these books, is pretty good. The ideas that the ancient weight of humanity on a city, London, and the collective memory of humanity, creates London's supernatural sentience. Over this theme, the Police detection storylines are layered.

In the first two books, although I enjoyed them, the background theme and foreground police story struggled to hold onto each other. Good, strong ideas, but failure to weave a sustaining story. A solid set of main characters are presented but some trouble fleshing them out. This was not helped by the reader, Damian Lynch, who failed to verbally separate the characters sufficiently. At times, straining to hold threads together, it felt like the writer was pleading with the reader to understand and follow along. And yet…

And yet, there was enough there that I did finish each book, “London Falling”, and eventually, although not immediately followed with “The Severed Streets” and just today finished “Who Killed Sherlock Holmes”.

I enjoy finding a new series and enjoy watching a writer find a stride. Paul Cornell is doing just that. Book one was a brave start. Book two was better. This one, book three, “Who Killed Sherlock Holmes”, is a winner.

In “Who Killed Sherlock Holmes”, Cornell’s “Other London” is well defined from the London of us common folks. The Police detection story weaving between the two London’s is solid and interesting. Emotional tension and involvement is produced by a solid story with solid, straightforward language. Cornell’s characters are now fleshed out enough so that the reader feels something toward each of them.

In the audio version, character delineation is helped by the stronger story and writing, but also because the reader has also hit his stride. The producers of this audio book must have read some of the less than stellar reviews of Damian Lynch’s reading of the first two books and coached him into a much better reading here in “Who Killed Sherlock Holmes”. Lynch keeps each character audibly unique and reads with much greater proficiency. After “Who Killed Sherlock Holmes”, I cannot imagine another reader for the “Shadow Police”.

“Who Killed Sherlock Holmes” was a audible page turner and I was sorry to reach the denouement and a little sad to hear the ever annoying “Audible Hopes you have enjoyed this Book”.

Luckily, the plot and ending of this third book would indicate that Cornell has another installation of the Shadow Police well in mind if not yet on paper. Well, I will be one of the first to listen once Audible produces that book!

story and narration were good, but the audio editing was stilted and annoying. No flow.

Wow. This book packed some serious emotional punch. How does a supernatural mystery about finding Sherlock Holmes' killer become such a meaningful, introspective story about trust, mental health, faith, and the human condition? Ummm. Good writing.

I enjoyed the previous books, but this one really pulled plot lines together in a very intense way that I didn't anticipate. I recommend this book for everyone who is trying to find by meaning in the conflicts in today's social climate. Paul Cornell shares some interesting insights into why people behave the way they do.

I love the Shadow Police. These blokes face down the most unlikely of scenarios. I took a while to imbibe this 3rd installment for no particular reason, other than the scores of books on my TBR. Now that I am done, I'm a bit sad it's the last book. I loved Who Killed Sherlock Holmes as much as London Falling and Severed Street. what can I say? Dark, gritty, funny. Wonderfully complex. Highly intelligent. Thought provoking. This book, and this series, is for folks who like to think about their fiction, who yearn to understand and explore that deeper, spiritual motivation that this universe seems to possess and force upon us, and that we, as mortals in it, somehow cannot see. This is the physics of the occult.

if you like Rivers of London, you must read thiis series. it is brilliant. sadly so far the publisher won't pick up the last two books in a 5part series. read and urge others to read it. maybe it will be finished in publication.

A every day London story NOT

the shadow police are back on the case.
it could be a good idea to recap the earlier books before jumping in. unless your memory is a lot better than mine (not that hard). I have grown to like the team and felt that this book (although very good ) a little rushed in places and did not feel for some of the lesser characters has much as I could have done. On the whole a most enjoyable experience, now I have to wait for the next book.

With fictional characters coming to life but in different disguises, one losing his sanity, another losing her happiness and the story jumping 5 years back you need all your attention on it to follow it. The less than distinct character voices from the narrator doesn't help.

What would have made Who Killed Sherlock Holmes? better?

I love Neverwhere, Pater Grant and The Obsidian Heart Trilogy but I just couldn't follow this at all. Maybe its because Audible chose to make book 3 its daily deal meaning that I hadn't a clue who the characters were. There doesn't seem to be a recap or if there was I missed it.

The Back Road by Rachel Abbott.

No complaints about the reading.

What character would you cut from Who Killed Sherlock Holmes??

None. Would have liked more of a recap for newcomers.

I'd try the first book in the series but may give it a while before I do as have so many other books lined up.

The story is jarring

The author has some entertaining ideas, but unfortunately he is not a very good storyteller. The movement of the plot and the actions of the characters often feels jarring. It leaves me more annoyed than entertained or satisfied.

Damyan Lynch on the other hand is delivering a solid performance.

A series getting better and better.

Thoroughly enjoyed this third outing for the Shadow Police - but it's the performance of Damien Lynch that sets this out from many other audio series.

Struggling to retain wonder and horror of first book

The first book in the series introduced us to an amazing mix of police work and fantasy horror and while this third book builds on the underlying larger story arc of the smiling man the characters appeared more observers than participants. Narration as ever superb.

Not as good as the first two

I really liked the first two and was excited about this one. Same narrator, who did a good job. The story seemed a bit forced and all over the place.

Interesting concept very dark but light at the end of the tunnel. Lovely performance. Next book now please!

There are so many better writers in this genre

Well. I stuck it out until the bitter end but know it's time I'll never get back. Try Ben Aaronovitch as a starting point.

I am a fan of this series so it may colour my judgement but I thought it was well written and well narrated. I'm happy to see them get a bit longer aswell.

As good as Rivers of London...read it!

Well written, brilliant character development and getting better book by book ... really worth a buy !

What would have made Who Killed Sherlock Holmes? better?

I really wanted to get into the story but it the iuninspired story and the voice just turned me off - hard work , even after the first part...

What was most disappointing about Paul Cornell’s story?

confusing convoluted with some story that supposedly happened before and I as a listener cannot fathom as why it has such impact on people Did I get to know that this was to be book two of a series? NO!

short introduction into the previous happenings

sadly disappointing The other books from " Rivers of London" series are soo much better!!!