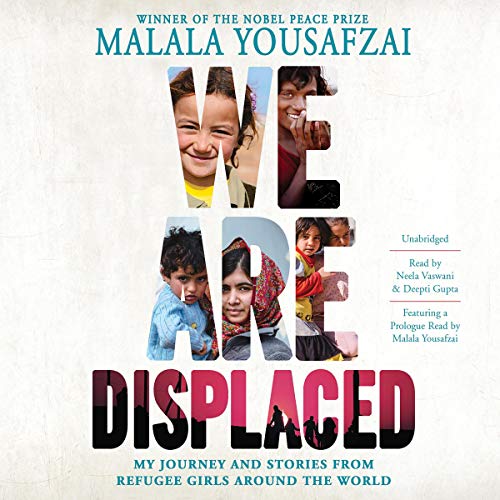 ALA Notable Books for Children 2019

"Nobel Peace Prize winner Yousafzai, who famously survived being shot by Taliban soldiers as a teen in 2012, is a passionate activist for girls' right to education. Yet, in this profound volume, she sidesteps those aspects of her life to illuminate another experience: displacement - beginning with her family's forced 2009 evacuation of their Pakistani hometown in response to escalating Taliban violence. Comprising the bulk of the book are urgent, articulate first-person stories from displaced or refugee young women whom Yousafzai has encountered in her travels, whose birthplaces include Colombia, Guatemala, Syria and Yemen.... The contributors' strength, resilience, and hope in the face of trauma is astounding, and their stories' underlying message about the heartbreaking loss of their former lives and homelands (and the resulting 'tangle of emotions that comes with leaving behind everything you know') is profoundly moving." (Publishers Weekly)

"A stirring and timely book that strips the political baggage from the words 'migrant' and 'refugee,' telling the deeply personal stories of displacement and disruption that were lived by Yousafzai and nine other girls.... [In] all these accounts, hope emerges as a kind of belligerent reaction to pain and loss." (The New York Times Book Review)

"While geared to mature middle and high school level listeners, this is an audiobook that could be listened to and discussed in a guided family or school setting. Anyone who wants to learn more about immigration and refugees will benefit from this telling." (School Library Journal, review of audiobook edition)

In this powerful book, Nobel Peace Prize winner and New York Times best-selling author Malala Yousafzai introduces the people behind the statistics and news stories about the millions of people displaced worldwide.

After her father was murdered, María escaped in the middle of the night with her mother.

Zaynab was out of school for two years as she fled war before landing in America. Her sister, Sabreen, survived a harrowing journey to Italy.

Ajida escaped horrific violence but then found herself battling the elements to keep her family safe in their new makeshift home.

Malala's experiences visiting refugee camps caused her to reconsider her own displacement - first as an internally displaced person when she was a young child in Pakistan and then as an international activist who could travel anywhere in the world except to the home she loved. In We Are Displaced, Malala not only explores her own story, but she also shares the personal stories of some of the incredible girls she has met on her journeys - girls who have lost their community, relatives, and often the only world they've ever known.

In a time of immigration crises, war, and border conflicts, We Are Displaced is an important reminder from one of the world's most prominent young activists that every single one of the 68.5 million currently displaced is a person - often a young person - with hopes and dreams.

Malala is such a force for good

I have never been hungry, displaced, or inconvenienced in any way. I am an Ivy League Med School grad and had my parents’ support all the way. My ACE (Adverse Childhood Experience) Score is 0, which is a perfect score. This is why Malala’s story and the stories of other girls and women are so important to me. Most of the world has not had my idyllic life. We must continue to fight for the rights of ALL girls and women. We are the majority, after all. Why are the men in charge?

I loved that the book was read by the actual young ladies. very moving and thought provoking

NOT We are Malala.

I read I am Malala and I found it a page turner. I was fascinated, intrigued, and awestruck page after page. This one I only made it to about 1.5 hours in and couldn't do it anymore. It was not interesting. Skip this one.

If you have raised a daughter or daughters, this is a must read. The courageousness and depth of these young women is really inspiring.

In this world of deepening xenophobia and ignorance of immigration and complete lack of nuance in discussion of the complex issues, this is a really moving account of individual young women and their struggles and journeys. Not only have these women overcome tremendous personal trials but they have used their hardships to contribute to the betterment of the more than 60 million refugees that follow in their footsteps.

Deeply moving and inspiring and the narration is top notch.

Truly impactful book that highlights the authors' unique adversities in each of the selected stories as well as several common themes between them. I chose this book hoping for an introductory understanding of refugee experiences, and that is exactly what I gained from it. Each story left me more moved, inspired, grateful and motivated to contribute to this cause than before. I will be thinking of these brave girls and carrying them and their stories in my heart for a long time.

These are eye-opening, first hand accounts of what these girls have endured. I appreciate their honesty and bravery in sharing their stories with the world.

To hear the stories of young refugees is incredible. Those things and stuff that they saw and have went through just unimaginable. The fight is real the fight continues today. Very inspirational stories. Courage of many to escape danger. This book is amazing and highly recommended. It open my eyes to a whole new world out there. Let’s support our fellow men and women around the world. And give shout out to all refugees.

This beautifully narrated collection of memoirs of displaced women from all over the world, offers insight into their experiences as refugees and the displaced. Their stories reveal woman who possess a courageousness beyond measure. Listening to each one, you first feel their despair, bewilderment, anger, and pain, and then, inspires you with their amazing endurance, strength, and hope. Most importantly, it oportunes the reader the perspective of being displaced, so that you may never again see or hear the word, "refugees" and think of "them" as some unknown mass of people, undeserving of being able to find a home. At the same time, it opens your eyes to the blessings in your life that are so often taken for granted. Your heart will be warmed and inspired with their grace, perseverance, and resiliency, as well as with their inner strength and appreciation for life. A must read!

Refugee Stories that must heard. Heart breaking. Brought tears to my eyes as I listened intently to accounts of painful experiences.

I learned so much and can not believe what these young women have endured. Thank you for sharing