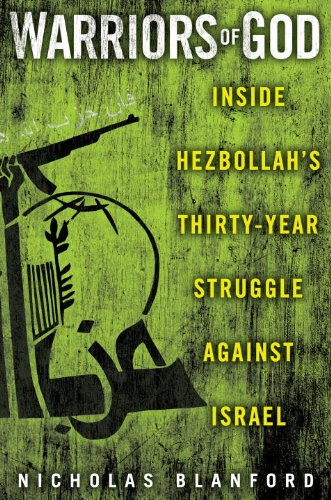 Hezbollah is the most powerful Islamist group operating in the Middle East today, and no other Western journalist has penetrated as deeply inside this secretive organization as Nicholas Blanford. Now Blanford has written the first comprehensive inside account of Hezbollah and its enduring struggle against Israel. Based on more than a decade and a half of reporting in Lebanon and conversations with Hezbollah’s determined fighters, Blanford reveals their ideology, motivations, and training, as well as new information on military tactics, weapons, and sophisticated electronic warfare and communications systems.

Using exclusive sources and his own dogged investigative skills, Blanford traces Hezbollah’s extraordinary evolution - from a zealous group of raw fighters motivated by Iran’s 1979 Islamic revolution into the most formidable non-state military organization in the world, whose charismatic leader vows to hasten Israel’s destruction. With dramatic eyewitness accounts, including Blanford’s own experiences of the battles, massacres, triumphs, and tragedies that have marked the conflict, the story follows the increasingly successful campaign of resistance that led to Israel’s historic withdrawal from Lebanon in 2000.

Warriors of God shows how Hezbollah won hearts and minds with exhaustive social welfare programs and sophisticated propaganda skills. Blanford traces the group’s secret military build-up since 2000 and reveals the stunning scope of its underground network of tunnels and bunkers, becoming the only journalist to independently discover and explore them. With the Middle East fearful of another, even more destructive war between Lebanon and Israel, Blanford tenaciously pursues Hezbollah’s post-2006 battle plans in the Lebanese mountains, earning him newspaper scoops as well as a terrifying interrogation and a night in jail.

Insurmountable Research on this Subject

The author lived among the Lebanese people for one-third of his life as a journalist for the English news publication in Lebanon. While there, his insider allowances and relationships with Hezbollah's foundational members, prove insurmountable hermeneutic research into this book's subject matter. He mixes first-hand accounts with dogged research and personal interviews for his information. While this provides incredible insight from one perspective, it sits a bit lacking in Israeli perspective and plight.
-
Though I do not possess a formidable insight into the advent of Hezbollah and their struggles with Israel, I must call attention to the author's tendency to cast Israel as the villain. Not that they don't deserve their share of the blame, given the veracity of this history, and the fact that war comes with a cost. Even so, I felt limited blame was placed on the Shia resistance and their justifications for violence which remain controversial today. This account is brilliant but quite one-sided.

I went into this book not anticipating that but was left with some questions and an opportunity to investigate the opposite viewpoint. This is not a knock on the book, as it was quite good, but merely a "heads-up" to those going in. You'll likely go looking for book two as I have.

Strong on anecdotes, shallow analysis, no claim of objectivity. Loyally represents the Hizballah/Iranian narrative. In urgent need of a moral compass.

I loved every sec of it. The audio was good. The story was very detailed that it put you in the middle of the story.

Unfortunately I paid full price for this book, the information contained I the book makes for very interesting reading. However, the author does not once mention the fact that Hezbollah is a terrorist organization. It is strictly told from a Hezbollah point of view. Never once condemning any of their actions but quick to blame Israel for any and all of their actions.

If you found this because you want to learn about the history and structure of Hezbollah from an impartial source, this is the audiobook for you. It will be a credit well spent, you won’t regret it.

This history of Hezbollah up to around 2009-10 is well told by the author who has spent decades covering Hezbollah. At times he comes off almost fawning but I think it's understandable having spent a large portion of one's adult life reporting on LH and trying not to burn Bridges with many of his sources. That said this is no propaganda piece and he raises some questions about some of Hezbollah's decisions like launching the 2006 war and it's future.

should scare you back to your own borders

The reporter obviously has plenty of first hand knowledge from his years of reporting on the region, which I like. Now, all I need to do is find corroborating accounts of his info elsewhere.

What was one of the most memorable moments of Warriors of God?

The description of the 1996 Israeli shelling on the UN outpost at Cana.

The ambush of the Israeli Special Forces unit in Ansouriyeh left the most distinct impression in my mind.

Neither, but the book has helped me to understand more clearly Israel's protracted war in Lebanon and some of the lessons of modern insurgent warfare. I have great respect for the Israeli Military organization, but I was impressed at how Hezbollah adapted and learned and became more sophisticated.

Excellent history if you can withstand the apologetics for Hezbollah

This was an incredibly detailed and engaging history of Hezbollah and events in Lebanon from the '80s onward. However, you'll have to bear through the obvious tone of apologetics as the author is slightly biased against Israel. For example, he made Israel culpable for Hezbollah's kidnapping of IDF soldiers because they were not well prepared. The victims are blamed only when they are Israeli. Otherwise, the account is excellent, notwithstanding a few odd mispronunciations by the narrator.