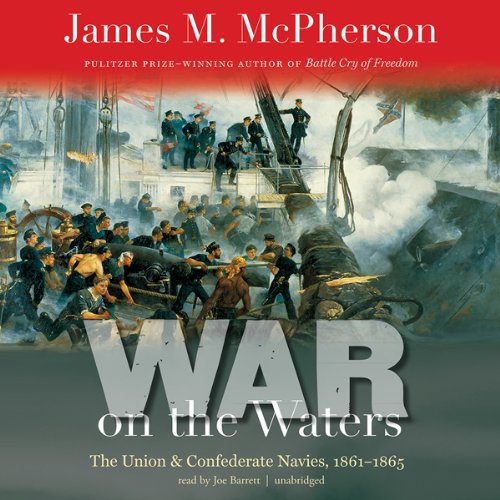 "McPherson, professor emeritus of Princeton and dean of Civil War historians, enhances our knowledge with this history of the conflict’s naval aspects. As definitive as it is economical, the work establishes beyond question the decisive contributions of maritime power to Union victory." ( Publishers Weekly)
"With martial verve, McPherson’s prose dramatizes their battles and places those within strategic contexts, such as the US Navy’s campaigns to control the Mississippi River. As always, McPherson’s latest is a sound collection-development investment." ( Booklist)
"With all the narrative grace, original scholarship, and equal grasp of both big picture and telling detail, Civil War historian nonpareil James McPherson has provided his admirers with another authoritative entry in his roster of essential books. McPherson never argues that the Union navy won the Civil War, but readers will argue that no Civil War library will ever be complete without this volume." (Harold Holzer, award-winning author and chairman of the Abraham Lincoln Bicentennial Foundation)

Although previously undervalued for their strategic impact because they represented only a small percentage of total forces, the Union and Confederate navies were crucial to the outcome of the Civil War. In War on the Waters, James M. McPherson has crafted an enlightening, at times harrowing, and ultimately thrilling account of the war’s naval campaigns and their military leaders.

McPherson recounts how the Union navy’s blockade of the Confederate coast, leaky as a sieve in the war’s early months, became increasingly effective as it choked off vital imports and exports. Meanwhile, the Confederate navy, dwarfed by its giant adversary, demonstrated daring and military innovation. Commerce raiders sank Union ships and drove the American merchant marine from the high seas. Southern ironclads sent several Union warships to the bottom, naval mines sank many more, and the Confederates deployed the world’s first submarine to sink an enemy vessel. But in the end, it was the Union navy that won some of the war’s most important strategic victories - as an essential partner to the army on the ground at Fort Donelson, Vicksburg, Port Hudson, Mobile Bay, and Fort Fisher, and all by itself at Port Royal, Fort Henry, New Orleans, and Memphis.

James M. McPherson taught US history at Princeton University for 42 years and is the author of more than a dozen books on the Civil War era. His books have won a Pulitzer Prize and two Lincoln Prizes.

Would you consider the audio edition of War on the Waters to be better than the print version?

I didnt read the print version

I enjoyed learning about how Lincoln and his admirals interacted. And how the evolution of the ships of war changed the landscape

Have you listened to any of Joe Barrett’s other performances before? How does this one compare?

This is my first

I wouldnt get this book if the idea of a history book might seem boring to you. I knew nothing about the naval histories of the Civil War's belligerents outside of the Monitor and the Merrimac. So, most of the book was a learning experience for me. And, since history is one of my favorite subjects, it was an enjoyable experience.

excellent starting off point for those with an interest in Civil War naval ops. Well written and briskly narrated, I highly recommend this for the casual civil war buff.

This a great, somewhat concise study in the navy's influence on tw civil war, the maritime technology that came out of the conflict, and the responsiveness of each side to the complications of a country fighting itself: mainly becoming a naval war largely on the rivers instead of the seas. I intend on reading(listening) to another of McPherson's books.

In all my Civil War reading, naval operations have seemed a sideshow, with even the capture of New Orleans overshadowed by the “real” war on dry land. As James McPherson makes clear, people at the time saw things very differently. News of New Orleans sent our otherwise sober-sided ambassador to Britain dancing about his office.

It’s easy to see why the navy’s role in victory is so overlooked; after all, there were no commodores at Appomattox. Be that as it may, McPherson’s narrative, uninterrupted by maneuvers on land (except when they correlate with naval operations), makes it clear just how much the navy did to bring Appomattox about. Beyond very hard fighting and the necessary tedium of blockade, the fleet was a year ahead of the army in the recruitment of freed slaves, whose services as pilots and gunners were highly prized and praised.

On both sides, there’s an entirely different cast of characters to meet, too; McPherson does a fine job of bringing each, with their particular fortes and failings, into sharper focus. While not the only book ever written about the naval side of the Civil War, this certainly has to be one of the most engaging and intelligent. Joe Barrett, whom I’ve known as a reader of fiction, hands in his usual excellent performance. True, his voicings of certain figures may, at times, seem a little over-the-top, but his air of comfortable affability makes you feel as if you and he are in this thing together.

I learned a lot

Most of my history books covered the naval side of the civil war with
“The North blockaded the South and captured control of the Mississippi river”...the end.
This book filled in a lot of information and was interesting at the same time.

Good coverage of a fascinating topic.

Nicely done history that puts together work that's seen piecemeal in other books. Full of tales of daring and intrigue. Good narration.

An engaging and extremely interesting look at the American Civil War on the water I found this extremely illuminating as it was a subject I had heard very little about. Indeed before listening to this audiobook my, like I’m sure many peoples, knowledge of civil war naval warfare was the well documented fight between the Confederate and Yankee Ironclads in Hampton Roads.

This book was let down slightly by the focus being mostly aimed at the Yankee side of the story however as the author acknowledge this had occurred more due to the lack of documentation and evidence remaining from the confederate navy rather than any bias on the authors part. Despite this it was an entertaining and informative look at the naval war during the American Civil War and certainly raised my interest levels enough to seek additional information.