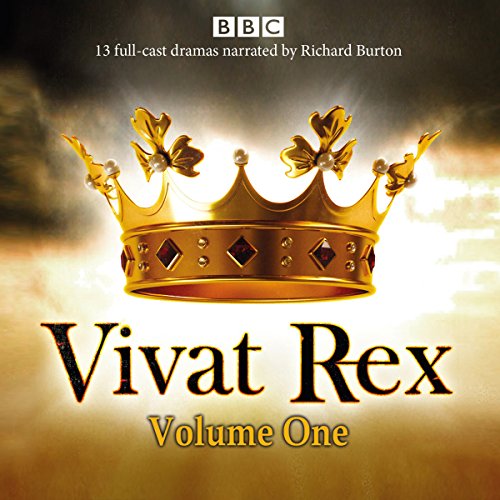 Richard Burton narrates this famous dramatic chronicle of the English Crown, a treasure of the BBC radio archive published on audible for the very first time.

Vivat Rex is the landmark drama series first broadcast on BBC Radio 4 in 1977. Over the course of 26 instalments, each one narrated by Richard Burton with a full cast, the fortunes of the English Crown are followed through 225 years of British history, from Edward II’s accession in 1307 to the birth of Elizabeth I.

Each drama is adapted by Martin Jenkins from the works of Shakespeare, Marlowe and their Elizabethan contemporaries, and each includes a stirring musical score by Christopher Whelen. Also included in this collection are bonus interviews with Vivat Rex writer, producer and director, Martin Jenkins, studio manager Enyd Williams and actor Martin Jarvis, first broadcast on BBC Radio 4 Extra.

The quality of this collection of (mostly) sixteenth century dramas adapted for radio is superb. With truly great voice talent and effects, the production is riveting, once you get settled into the rhythms of Shakespeare, Marlowe, and company. Between the episodes there are short interviews with members of the original cast or production crew that illuminate the creative process behind the production. I found the interviews most enjoyable, and am looking forward to the 2nd half.

A stunning big name cast bring this history saga to brilliant life. I was enthralled from the beginning and found myself making time to listen during my days.

a brilliant series with amazing stars like Richard Burton amazing performance a must have .

Loved it. I'd recommend it to anyone interested in historical dramas. If you like this then try the Plantagenet series.

This BBC drama series is excellent. The story and the casting are very good. This is one of the BBC's best.

great plays but the music is very off-putting.

If this book wasn’t for you, who do you think might enjoy it more?

I would have enjoyed the audiobook more, had there been no musical introduction. It goes on for far too long and is very repetitive. The composer doesn't rank on the same level as the playwrights he accompanies for.

Edward II, interesting to have an openly gay king

Absolutely no music. It does nothing to enhance the experience. Also, there's no list of plays one gets on the information.

I can still appreciate its redeeming qualities.

If you have no musical ear or a bit tone death or can look over the long dreadful musical introductions, I'd still recommend it.