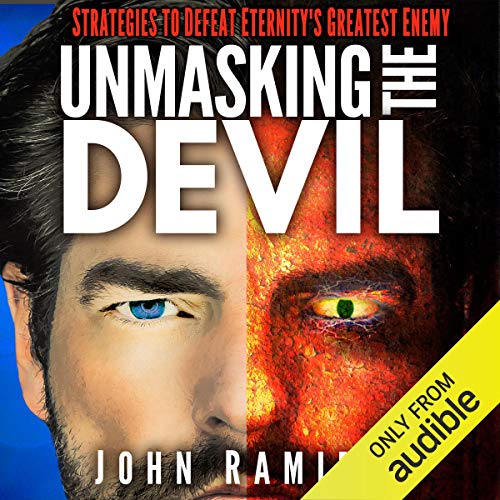 Satanist-Turned-Evangelist Gives You the Inside Strategy to Defeat the Devil's Plans!

Many people, even Christians, deny the devil's power. John Ramirez doesn't have that luxury - he experienced the prince of darkness up close and personal.

In the impoverished streets of the South Bronx, John Ramirez found "acceptance" from a family of witches and warlocks. These practitioners of dark arts trained him to be a high-ranking satanic priest - a story told in his first book, Out of the Devil's Cauldron. However, everything changed when he met the living Christ.

In Unmasking the Devil, John Ramirez shares an insider view of how Satan operates so you can avoid his traps and learn how to:

No army goes into battle without first knowing the tactics of their enemy. Receive behind-the-scene glimpses of Satan's strategies and equip yourself to live victoriously over the powers of darkness!

"Spiritual warfare is a must for every Christian if they are going to survive in the coming years," says John Ramirez. "It's time to stop playing patty-cake with the devil and learn how to put hell on notice."

Most important book after the Holy Bible

Do not be concerned about the narrator. The introduction is an imitation of Al Pacino in A Devils Advocate movie scene. It lasts a minute or so and that's it. Then the narrator uses his regular voice till the end. He has a good voice so don't listen to other reviews. The sample on audible is a the intro of Pacino imitation. This book is everything about spiritual warefare. Who what when where why. I never take notes from an audiobook but this book led me to get out my notebook. Get this book. You need it. You won't be disappointed.

I could feel things leaving my body during the prayers. Even after calling out spirits I didn’t think I had any part in, I could feel a reluctant thing being pulled out. So I researched those specific ones and found that I was simply unaware of all that they were attaching themselves to and getting into my life. I started to experience nights of things being exposed when they wanted to remain hidden, and was able to remove a tremendous chain off of my child in so seeing. I recommend this author be taken at his word.

I purchased the audible version because of time, but once I listened to it, there was so much anointing. I just had to purchase the book so I could have it in my library. Very blessed by brother John Ramirez may the Holy Spirit guide him in everything he does for the Lord

powerful message I love his testimony and how God is using him but the music in this reading of the book and the voice did not fit. Felt awkward listening to it I'm going to buy the book to read myself.

I have endured horrific demonic torture cursed upon me by my Mother as a 1 yr old girl. It had been erased from my mind until I had a horrible water skiing accident and started physical therapy. I had no idea your muscles hold memories and I started seeing all of these horrible visions. John has helped me to see that all of the things I have been going through for over 20 yrs as a Believer? Are not my fault. I have had many deliverances done on me. But it does not stop for long. She is still alive and she curses me still I am so tired of always having to go through weeks and months to be delivered from
What ever she put upon me. I surround myself with Gods armor daily. Always praying always taking the authority of Jesus Christ to repent and rebuke of all things. I
Have tried to contact John. Because I believe I can share more about her and be able to once and for all be free

At first the narration really bothered me but then I realized I love & needed the content. I’ve listen to it several times and tell others about this book. The content is what I focus on & it is priceless.

We as Christians really need to connect with God and the Holy spirit. Connection with God will show you darkness and lies.
https://youtube.com/playlist?list=PL9E4PzCYYAxJXBdh0IHyUmBj9aam7sutp

Thank you! Spiritual walfare brought to light. bless you for this work in Jesus name.

Great book. The narration is cheesy.

Great subject matter. This book is a must read for all who believe in Jesus Christ . However, the narration is overly dramatic and I found it distracting.

I would ask anyone that wishes to read or listen to this audio book to think and consider  “The golden rule”  “Do unto others as you would have them do unto you”. A command based on words of Jesus in the Sermon on the Mount: “All things whatsoever ye would that men should do to you, do ye even so to them.

The author should revisit many of the statements that he makes within his book as they could insight more hatred and violence towards everyone that isn’t a “Christian” The saying that a Warrior sees everything as a battle is so true and the Author was Satan’s warrior. He now believes that there’s a battle to be fought with everything that isn’t Christian. One statement and contradiction that the author makes is that the God of Islam is a demon and that Muslims when pressed will defend their religion; however the author advises Christians to do the same and fight and defend even down to don’t serve a gay person – come on really do you honestly think that God having made us all that we should despise others!

The true battle is within us all and we must remain centred and balanced in our thinking, living our lives through love and acknowledgement of God.  We must therefore not judge others based on our opinions and possible biased beliefs, as it is only God that can truly judge us in the end by our actions.

Informative, revelatory and much needed.

Great book, it helped me to address the forces of darkness and plan to defeat the enemy at strategic times of the year. The book pinpoints the areas in our life that is either a open door, trial or test. It encourages me to pray more and step up my prayer and fasting life.

Brilliant book. Well told. Suspenseful music. One of my favorite books. Praise the Lord for this testimony!

It’s wonder what The Lord as done for John Ramirez. But as a Christian who is also saved by Grace into the body of Christ. Colossians 2 Romans 5 and 8 Book of Jude Book of Revelation . All show Satan’s downfall. Colossians tells us That Our Lord Jesus Christ completely disarmed Satan of All his weapons. The Blood of Jesus as set every Christian Completely Free. There’s Nowhere in the New Testament that the Apostles cast demons out of Christian men women or children. Let’s not give too much credit to a Defeated for. Christ Jesus Died once and for all Hebrews say and set us Free. Fix your eyes on Jesus The Author and Finisher of our Faith. God Bless

Fantastic read. You won't put it away. Very well written. Such a powerful testemony. Only Jesus can make such transformation.

Couldn't put it down, loved it. And I had to read it again to get more from it

This book is truly amazing, full of truths with references to the Bible to back u what is being stated, and incredibly powerful prayers are shared!

I would highly recommend this book to anyone.

I loved this audio book. Not only was the narration brilliant, the way it was dramatised was amazing. WOW! Every mature Christian needs to listen to this audio book. It is a REAL eye opener. John Ramirez is writing from first hand experience about the reality of the 'enemy's' works in the lives of people and society. It is one of the most powerful audio books I've listened to so far. Make sure you buy it Child of God.

Essential reading for every Christian on the realities of spiritual warfare n how to defeat the enemy.

Great book! Really helpful. It's expanded my knowledge of deliverance and helped me prat for myself.

this is a awesome book and a God send to me

I love this book.It was well narratived and very helpful, I couldn't put this book down

Such a powerful book

Thank you John incredible insight into the principalities and powers as Christians we fight . I highly recommend this . The word of God says my people perish for lack of knowledge so ever believer should read this at some point .

Awesome book on revealing the truth about Satan

A real eye opener what the devil and his demons do to people in this current age. Love the prayers to combat and eradicate the demons from our life and how to break free from fear, lust, demonic curses. I highly recommend John Ramirez book.

this book met my expectations. I do hope many Christians read or listen to this book. God is using John powerfully and is equipping the church on how to overcome the enemy the devil. it's a must read book and for those who chose to ignore it will be destroyed.

I enjoyed reading it a must have for any Christ believer, I found this books powerful

Powerful message. Thank you John for sharing & the team who put the audio together

Everything about this book was just brilliant. totally recommend to any reader. loved it so much.