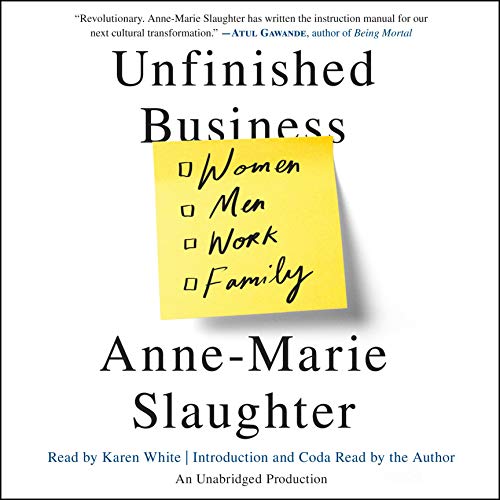 “An eye-opening call to action from someone who rethought the whole notion of ‘having it all,’ Unfinished Business could change how many of us approach our most important business: living.”(People)

“Slaughter argues that the current punishing route to professional success - or simply to survival - is stalling gender progress.... [Her] important contribution is to use her considerable platform to call for cultural change, itself profoundly necessary. The book’s audience, then, shouldn’t just be worried womankind. It should go right into the hands of (still mostly male) decision-makers.” (Los Angeles Times)

“Another clarion call from [Anne-Marie] Slaughter... Her case for revaluing and better compensating caregiving is compelling.... Slaughter skillfully exposes half-truths in the workplace [and] makes it a point in her book to speak beyond the elite.” (Jill Abramson, The Washington Post)

Named one of the best books of the year by The Washington Post, NPR, and The Economist

“Slaughter’s gift for illuminating large issues through everyday human stories is what makes this book so necessary for anyone who wants to be both a leader at work and a fully engaged parent at home.” (Arianna Huffington)

When Anne-Marie Slaughter accepted her dream job as the first female director of policy planning at the US State Department in 2009, she was confident she could juggle the demands of her position in Washington, DC, with the responsibilities of her family life in suburban New Jersey. Her husband and two young sons encouraged her to pursue the job; she had a tremendously supportive boss, Secretary of State Hillary Clinton; and she had been moving up on a high-profile career track since law school. But then life intervened. Parenting needs caused her to make a decision to leave the State Department and return to an academic career that gave her more time for her family.

The reactions to her choice to leave Washington because of her kids led her to question the feminist narrative she grew up with. Her subsequent article for The Atlantic, "Why Women Still Can't Have It All", created a firestorm, sparked intense national debate, and became one of the most-read pieces in the magazine's history.

Since that time Anne-Marie Slaughter has pushed forward, breaking free of her longstanding assumptions about work, life, and family. Though many solutions have been proposed for how women can continue to break the glass ceiling or rise above the "motherhood penalty", women at the top and the bottom of the income scale are further and further apart.

Now, in her refreshing and forthright voice, Anne-Marie Slaughter returns with her vision for what true equality between men and women really means and how we can get there. She uncovers the missing piece of the puzzle, presenting a new focus that can reunite the women's movement and provide a common banner under which both men and women can advance and thrive.

With moving personal stories, individual action plans, and a broad outline for change, Anne-Marie Slaughter reveals a future in which all of us can finally finish the business of equality for women and men, work and family.

“I’m confident that you will be left with Anne-Marie’s hope and optimism that we can change our points of view and policies so that both men and women can fully participate in their families and use their full talents on the job.” (Hillary Rodham Clinton)

Audible chapters are not book chapters

It was a huge help to me. I'm a PhD Biochemist with a 10 month old. I had been struggling with the feeling that I wanted to spend more time with my son vs the hard long hours in a lab, almost the opposite of mom-guilt, career guilt. It has helped me immensely!

Comprehensive look at the cultural factors in the workplace and in gender norms that then play out into structural circumstances that make life challenging for working parents. She spoke from personal experience as well which gave her work more credibility in my opinion. There has been an unequal valuing of care and competitive productivity in the US and yet both pieces are essential. Good work, Professor Slaughter!

One of the best books ever listened to!

Excellent narration, open minded, talks about what we fear of, gives a perspective to the society we need worldwide. Thank you for writing this book!

A must-read for every man

Be prepared for every preconceived notion of (yes) women, men, work, and family to be challenged. An exceptionally well-written set of essays by one of the preeminent social thinkers today.

What did you love best about Unfinished Business?

I liked how the author focused on women's and men's issues with work and life fit.

The narrator tended to speak in a stiacatto style that was uncomfortable to listen to. The author spoke at the beginning and end of the book for a short duration. I enjoyed listening to the author more than the narrator.

I enjoyed the book and the main thesis. But I would have preferred it in the author's own voice (as the introduction). Her language / ideas are a bit high minded and the narrator only accentuated this with an almost aristocratic tone.

A great framing of work/family issues.

I loved it, it was engaging and fascinating. So many common - sense ways of accommodating both work life and caregiving demands for both men and women.

A must read / listen

Intelligent, well articulated, and integrated perspective on advacing equality in our society. The last of the book is a more practical guide but was less interesting for me than first two parts.

Worth sticking with right until the end

An important book, for both men and women, employees and managers, breadwinners and care-takers.