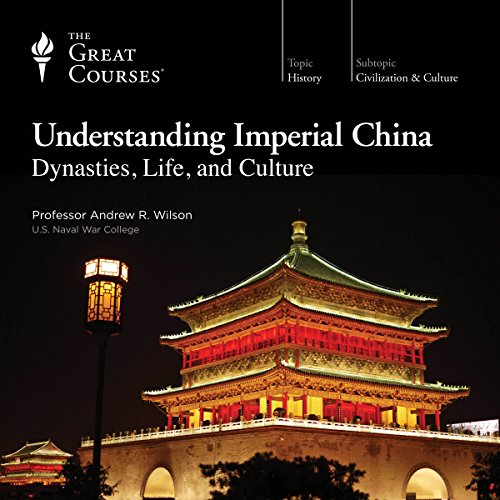 A knowledge of China's imperial history is vital for any understanding of its present, as modern China is linked in many ways to the extraordinary culture of its empire. These 24 lectures take you to the heart of life during China's imperial era, through the lives of individual subjects of all social ranks. Across the arc of the course, you'll witness what daily life was like for government bureaucrats, for scholars, for women of the court, for soldiers, merchants, craftspeople, courtesans, imperial cooks, and many others - all against the backdrop of the diversity, the genius, and the majesty of imperial China.

Understanding Imperial China: Dynasties, Life, and Culture is your passport to this incredible, historic world.

To any person interested in China, this is an enjoyable course. Very clear, well structured and well presented. The professor knows and knows how to teach. I recommend it!

History is more often than not, story of the dead. But in this course we get to look at things from the perspective of the people living at those times - Right from the sculptors of the first emperor's terracotta warriors to the little girl whose feet was bound as a submission to society's obscure perception of beauty; From the Ming dynasty soldiers who rebuilt and patrolled the Great Wall, to the fatherless boy, Temüjin, who went on to be the founder of the largest land empire in all of history; From the celebrated courtesans who entertained the educated elites, to the wannabe elites preparing for the prestigious Imperial civil service exams.

Imperial China was one of the most populous, influential and powerful state in the world for almost two millenia. And to be able to look at the history of this great empire unravel right from the eye of its protagonists was an wonderful experience.

I loved the topic-based lectures! I found it more engaging than attempting to summarize thousands of years of events in order, as many histories do. I wish it were more detailed in each chapter. It was a wonderful introduction, but a few lectures were mostly anecdotal - for example, there’s a section where he discusses an era of great poets and traditions with stories about a few, but it’s not clear how they’ve continued to influence the culture after their lives. The discussions end abruptly.

The narrator speaks calmly and conversationally, which works well for an audiobook. He does mistakenly say “white” when he meant well-off or wealthy (I can’t remember which) at one point - I hope it gets reviewed and edited out, since it is a mistake with racial/classist significance.

I knew very little about Chinese history, and Prof. Wilson provided a clear and entertaining introduction. I like his emphasis on the lives of common people. He doesn't get bogged down in dates and wars as some historians do. Instead he presents an overview by general subjects that also has vivid details. He puts events in political and geographic context. Makes me want to learn more about China, and even take a trip to see some of the areas he mentions. Highly recommended!

Upon first go through there many names that make it difficult to keep track of characters; but the story is 5000 years and it gives great perspective. Will review this again and expect to enjoy it more. I will download the pdf and follow the story a little closer.

The scholarship is sound for the most part but the professor perhaps tries too hard to relate Ancient Chinese forms of gov’t and experience to modern US ones.

This course was both engaging and informative. As a high school history teacher I appreciated the professor's approach to the subject and his obvious enthusiasm. I only wish there had been more lectures in the course!

Fascinating insight into another time and place. Describes the era and its culture in vivid detail. Only minor complaint is I could do without the Navy disclaimer at the end of every lecture.

This is a great overview of the history of China. Professor Andrew R. Wilson is a very knowledgable and engaging lecturer. I recommend this course for anyone with an interest in China.

There's a lot of knowledge packed into this course and I learned a lot. Many events and details were missed, but the history of China is a dense topic and a single series of lectures can't be expected to touch on everything! So overall, I was impressed by the content.
I can't give five stars because the lecturer's Chinese pronunciation wasn't very accurate, and at times I couldn't really understand the Chinese despite being able to speak the language myself. If the Chinese had been clearer, it would have been a little easier to follow up on the names mentioned and do further research. Nevertheless, the content itself is fantastic and I'd certainly recommend the book for anyone interested in the history of China and wanting to expand their knowledge.

For those looking for a good way into Chinese history but aren't just looking for the conventional narrative, this is a great way in. Blends in a mix of conceptual issues and draws some nice comparisons points in an accessible manner. Nicely seperated into half hour blocks.

The long introduction to "the great courses" and how we can learn so much by just making 30 minutes a day, bla, bla, bla... even before we get into the subject, the topic... I thought I was listening to a TV SHOPPING program or some door-to-door salesman...
Totally unnecessary and already deeply annoying.

Then I stopped listening when the narrator started talking about himself and his health and the medicine he used to explain opium use in China.
I found this irrelevant and annoying.

Took me back to the eight years I spent in China. I would have liked to listen to the course while I was living there...