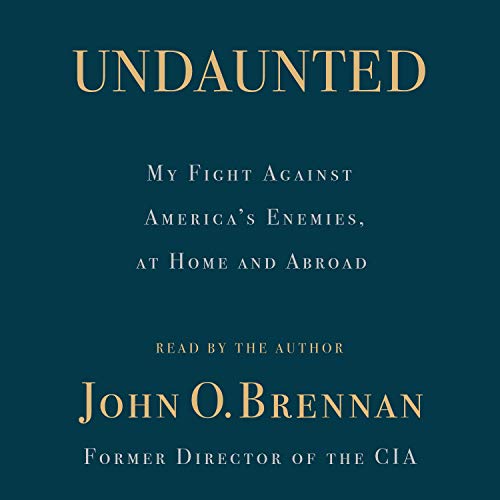 This program is read by the author.

A powerful and revelatory memoir from former CIA director John Brennan, spanning his more than 30 years in government.

Friday, January 6, 2017: On that day, as always, John Brennan’s alarm clock was set to go off at 4:15 a.m. But nothing else about that day would be routine. That day marked his first and only security briefing with President-elect Donald Trump. And it was also the day John Brennan said his final farewell to Owen Brennan, his father, the man who had taught him the lessons of goodness, integrity, and honor that had shaped the course of an unparalleled career serving his country from within the intelligence community.

In this brutally honest memoir, Brennan, the son of an Irish immigrant who settled in New Jersey, describes the life that took him from being a young CIA recruit enamored with the mystique of spy work, secretly defiant enough to drive a motorcycle and sport a diamond earring, and invigorated by his travels in the Middle East, to being the most powerful individual in American intelligence. He details his experiences with very different presidents and what it’s been like to bear responsibility for some of the nation’s most crucial and polarizing national security decisions.

He pulls back the curtain on the inner workings of the Agency, describing the selfless, patriotic, and invisible work of the women and men involved in national security. He also examines the insularity, arrogance, and myopia that have, at times, undermined its reputation in the eyes of the American people and of members of other branches of government. Through topics ranging from George W. Bush’s intervention in Iraq to his thoughts on the CIA’s controversial use of enhanced interrogation techniques to his eye-opening account of the planning of the raid that resulted in Bin Ladin’s death to his realization that Russia had interfered with the 2016 election, Brennan brings the listener behind the scenes of some of the most crucial moments in recent US history. He also candidly discusses the times he has failed to live up to his own high standards and the very public fallouts that have resulted.

With its behind-the-scenes look at how major US national security policies and actions unfolded during his long and distinguished career - especially during his eight years in the Obama administration - John Brennan’s memoir is a work of history with strong implications for the future of America and our country’s relationships with other world powers.

Undaunted: My Fight Against America’s Enemies, at Home and Abroad offers a rare and insightful look at the often-obscured world of national security, the intelligence profession, and Washington’s chaotic political environment. But more than that, it is a portrait of a man striving for integrity; for himself, for the CIA, and for his country.

Excellent! Although it is sad to think of the loss of the smartest and most experienced people their ultimate replacements of unqualified and inept cronies of this president.
Thank you, Mr. Brennan, for your service!! I hope we hear more from you in the new administration.

During the past 4 years my confidence in the integrity of the people who work in governmental service has suffered. However this book has restored some of that confidence. I learned more about our behind the scenes work for the good of the world than I was aware of. John Brennan is brave enough to speak truth to power and human enough to admit to mistakes. We need more like him.

Overall: Well, I’m on page 10 and I know already that this will be a 5-star experience.

Story: This story promises to be marked by the precise language of Mr. Brennan. The story it self, stripped of voice and style, will probably be a most important reference for this period of history.

John Brennan is a man of honesty, decency, and integrity, and it shows like a beacon in contrast to the lying, corrupt, treasonous members of the current administration. We are fortunate that he served his country so honorably. I wanted to say that right off . Brennan has roots firmly in the middle class, who has worked his way up in the intelligence community. This book gives the listener an insiders view of the internal workings of that community. It was detailed without being tedious. He describes his time spent in the Middle East,and the fact that he is an Arabic speaker (who knew?) Director Brennan did a very good job narrating the book. Very pleasing to the ear. Highly recommended.

What a story. What a life.

An intimate look into this fascinating life.
Thank you Director Brennan for decades of service to our country.
This is a spellbinding narrative.
The chilling story in the final few chapters is still unfolding.
Do not miss this one.

I'm not a huge fan of the CIA - I think that if the U.S. was half the democracy of character that We purport to be, we wouldn't have so many enemies to keep track of. But Brennan's book gave me a fresh perspective. Learning about the thoughtful wrestling of ethics in some of Our toughest issues, hearing a man at the highest levels of government and personal performance admit to mistakes, and following the creation of a man of integrity through life's crucible gave me faith in the humanity of Our government.

An Important Story Made Frustrating By A Poor Narration

I am a Brennan admirer, and believe the book needed to be written. But as is all too often the case, the author is not the right person to have read it. His narration is the most frustrating I can recall on Audible. I persevered with it because I was keen to add the content to my knowledge. But I fought the narration.
He sounds nothing like the Brennan of TV and Radio interviews.

Should be listed as an autobiography

This book is an autobiography of John Brennan. It has maybe a chapter or chapter and a half about the current president’s administration. While I liked the book and enjoyed the information about John Brennan, I would have liked more on his dealings with the Trump White House. I like John Brennan. I think he is a decent and honest man. I was however expecting more from this book.

the story of John Brennan's government career including his years as director of the CIA. Excellent!

I needed that. Confirmation from an honest, articulate, thoughtful, and brave American hero. I will never forget.

would love to meet

Having the former head of the CIA tell you how America has handled all that has been thrown at them over his time in that institution is mind-blowing for me a non American. I admire this man and his exceptional strength of character very much and I hope folk's give his book a listen to as his voice telling you his story is truly worth every penny.
I highly recommend this book.

A fascinating insight and consideration of the author’s working life, principles and values, sadly, devastatingly stress-tested by the current, out going President. In many respects Mr Brennan’s account of his working life is important testimony for anyone who cares about democracy and good governance.

Congratulations to John Brennan. I really enjoyed listening to the book and the insights he provided into his personal and professional life. He has some strength of character to survive the DC swamp and no shortage of ability to be appointed CIA Director. As an Irishman it is very pleasing he acknowledges his Irish heritage. Maith thú Sean O’Braonáin as Contae Ros Comáin! Well recommended.

An excellent insight into the workings of a career CIA employee with a deep insight into how Trump is destroying America's reputation.