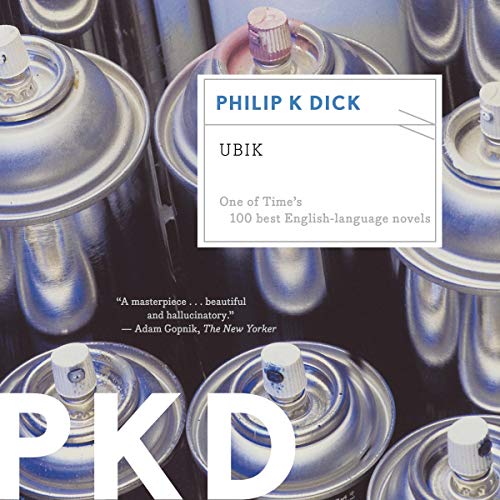 "From the stuff of space opera, Dick spins a deeply unsettling existential horror story, a nightmare you'll never be sure you've woken up from." (Lev Grossman, Time)
"More brilliant than similar experiments conducted by Pynchon or DeLillo." (Roberto Bolaño)

A mind-bending, classic Philip K. Dick novel about the perception of reality.

Glen Runciter runs a lucrative business - deploying his teams of anti-psychics to corporate clients who want privacy and security from psychic spies. But when he and his top team are ambushed by a rival, he is gravely injured and placed in "half-life," a dreamlike state of suspended animation. Soon, though, the surviving members of the team begin experiencing some strange phenomena, such as Runciter's face appearing on coins and the world seeming to move backward in time. As consumables deteriorate and technology gets ever more primitive, the group needs to find out what is causing the shifts and what a mysterious product called Ubik has to do with it all.

A great performance of an SF classic

What made the experience of listening to Ubik the most enjoyable?

I first read UBIK nearly thirty years ago, and while I remembered a lot of the plot (including the final reveal), what I didn't remember (or hadn't noticed) is how well constructed the novel was. Dick took great pains to "play fair" and leave enough bread crumbs to figure out what was going on if you paid attention. I was also interested in how "dated" the technological references might seem, since UBIK takes place in a 1996 with a Lunar Colony established (and others implied); there are a few moments in which the tech references show their age, but they don't detract.

What other book might you compare Ubik to and why?

In some ways this novel seems to have been a response (or even a commentary) on Kornbluth and Pohl's "The Space Merchants," while also involving some stylistic similarities to Bester's "The Stars My Destination" and Fritz Lieber's short story "Coming Attraction." But that's probably only me; UBIK is a legit, one of a kind original.

The first time that Pat uses her power to change the past with Joe Chip and his boss Runciter.

I don't have seven-hour sittings available, but it did well in big chunks of an hour or so at a time while I was driving.

Luke Daniels' narration is a real plus, and made the character of Al much more central in my listening than he was way back when I read the novel the first time. I thought he also caught the sadistic/playful nuances in the character Pat much better than I would have imagined. But, then, Luke Daniels is one of my favorite narrators.

Was listening to this book on a trip from California and let me tell you it is one of the most nail biting adventures I have ever listen. to Philip K Dick is a master at suspense and deception a must read. Just wait to the ending it's worth the whole ride

Just like the characters were unsure about what's happening to them, I was confused listening. Unlike a murder mystery or something of that sort, they were in a sci-fi then parallel world of people with varying/unknown skills and I had trouble keeping up. The last few chapter where everything was being explained was interesting.

This story is classic Philip K Dick. Definitely Philip K Dick at his weirdest. The voice acting in this performance is some of the best I have ever heard. The number of voices and characters in his repertoire is incredible. The wide variety of voices was particularly suitable for this story and it's whimsical, esoteric, and quirky details. This book is worth listening to for the voice acting alone, even though the story is a bit on the odd side.

I read this book 24 years ago as a teenager. I grew up a Philip K Dick fan and truly loved this book. I hadn't read it again, until recently, when audible offered it on sale, I thought it would be fun to listen to.

Wow! The narration of Luke Daniels makes this book so much fun to hear performed. Daniels brings the different characters to life with cleverly rendered voices. The book is as playful as it is mind-blowing.

I wish Philip K Dick were still around to hear his own work performed like this. I bet he would love it.

This is one of those books that is either genius or well... not genius. Maybe I am just not smart enough to "get" it. I can admit that, no harm. In the beginning I wanted to like it, hell by the middle I just wanted to understand it. By the end I figured I must have somehow missed an important bit of narration that was the necessary key to unlocking the meaning of the book. It was confusing, emotionally fragmented and just downright baffling. I would give you a short synopsis of the story, but I never did figure out what the story was. Don't get me wrong... there were moments of sheer brilliance, glimpses of shining insight and a breath of deep and profound vision. And then, I was just back to being confused. Can't recommend this one.

I liked it, but I haven't figured everything out..

I liked the story, but it was very confusing as to why certain things were happening, and when it ended I thought it was rather abrupt and didn't understand. I used to enjoy sci-fi quite a bit in my younger days, maybe age has dulled my abilities to figure stuff like this out... Anyway, it was entertaining and engaging, but to my ears an old fashioned sci-fi novel. Its primary goal is to make you think, entertainment is just a by- product.

Ubik makes it onto some lists of recommended sci-fi novels so I was keen to finally read it. I enjoyed the beginning and was looking forward to a good sci-fi yarn. Despite the promising beginning the story just kept getting more and more and then even more convoluted.

Things hadn't cleared up significantly by the end, though I still had high hopes. Unfortunately, I found the ending was as mystifying as it was unsatisfying. I'm not a fan of deep and meaningful endings.

If you love high brow sci-fi you may like this book. Personally, I value a satisfying and engaging story over literary panache. If you are like-minded, you may want to consider giving this book a pass.

Luke Daniels does a fine job narrating, though.

Would you try another book from Philip K. Dick and/or Luke Daniels?

They are both very talented, I have never been disappointed with Luke Daniels, Iron Druid, Marko Kloos stories, and many more. PKD improved with time and his short stories seem more fleshed out.

This book started with some interest and humor. but by midway through it seemed to wander and ended rather abruptly leaving the reader to either do some serious linking of ideas or simply saying meh. I chose the latter.

...but this one is so far out that it's almost impossible to find the story.

I cant call this a furious page turner (or ear flapper as it was audiobook?) but it was a good read. As with most pkd it didnt seem groundbreaking (anymore) but not without any weight or relevance, like all great sci-fi seems to transcend generations long after publish.

Some seem to see greater meanings or questions in this story and I can understand that if your looking for it but for me it was simply a very enjoyable story of easy digestion that passed from start to finish in just the right length to feel complete.

constantly keeps you guessing, a crazy amazing story! brilliantly narrated and a seminal piece of sci-fi!

Good story. Quite trippy and keeps you guessing. In fact, it gets better as it goes on. Good voices by the narrator!

Looking for some 10/10 sci-fi? Trying to fill the formless void in your soul? Wondering when the last time you were ever truly happy was? Read Ubik by Phillip K Dick

I hope they don't ever make a film of this it would ruin a great book.

The narrator was good however I found some of the voices grating and irritating.

Great pleasure to listen to.

Very strong story, kept me gripped till end. Well designed world, complex and consistent, filled with interesting characters . All this wrapped up in masterpiece of narration. Loved it. Will look for other books by Dick and Daniels.

narrated well, and really enjoyable !
safe when listened to as directed...

my first PKD story has left me wanting to read and listen to more - I loved how characters are puzzling away just like I was, in the ending I was a bit underwhelmed how things where left with our protagonist but its kind of the point ...it's not written badly at all, I just would liked it to have gone a little different.

Bit confusing to follow at the start, but finished better than it started. An ok storyline but think it could have elaborated a little.

Vividly engrossing and sometimes disturbing. Excellent narrator with an impressive array of accents and timbres.

I have discovered a gem unknown to me.

Great story in true Philip K Dick form. I have enjoyed it immensely. Reminds me of Inception movie, although it is much younger. I have seen it before I listened to the Ubick. Shame on me.

Great narration of one of the best P.K Dick books

I hope this narrator continues to work on P.K. Dick books so that I can collect my favorite 5 and then listen to them in a yearly cycle

One of the best books ever written!

I loved this book more than any book I have read. It's amazing, scary, very paranoid and soooooo much fun. I never understood why some people love the world of books like lord of the rings so much n want to keep going back. UBIK is like that for me. It's amazing.

One of the best Sci Fi books of all time. Absolutely brilliant and the narration was the best I've heard.

I regressed, then came back and loved every second of it. absolutely a winner

enjoyable, the narrator did a great job. this isn't the kind of book I usually go for, prefering more modern SciFi when I do read in the genre but it has a charm to do t I really appreciate.

Throughly enjoyed this book. One of my new favourites. The narrator done a wonderful job.

Great! “Get Ubik today! Read only as directed. “

What a great read! I often listen while driving.
Couldn’t wait to listen! I looked forward to driving!
Can’t wait to finish reading some more PKD books soon.
Can’t recommend it enough, for those who like their sci-fi on the physiological side.
Don’t hesitate. Get it!

What an amazing performance by Luke Daniels - such amazing work; I listen to it over and over again! To say nothing of PKD’s brilliant writing brought to life by Daniels.

Took me a little bit to get into but paid off. It felt early in like there was big back story I was meant to know but didn’t, but it all came together. The performance was one of the best audiobook performances I’ve heard. Great characters.

I didn't love this story as much as some of this author's other classics.
The narrator is definitely very talented but I found the performance a bit too cartoonish. It could be argued that this is appropriate as lots of elements of the story are quite absurd but it didn't work for me.