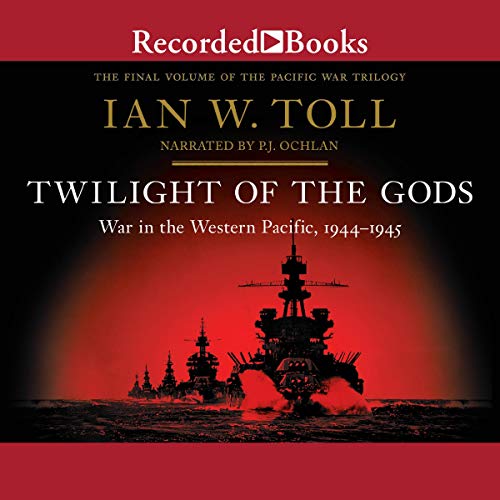 The final volume of the magisterial Pacific War Trilogy from acclaimed historian Ian W. Toll, "one of the great storytellers of war" (Evan Thomas).

Twilight of the Gods is a riveting account of the harrowing last year of World War II in the Pacific, when the US Navy won the largest naval battle in history; Douglas MacArthur made good his pledge to return to the Philippines; waves of kamikazes attacked the Allied fleets; the Japanese fought to the last man on one island after another; B-29 bombers burned down Japanese cities; and Hiroshima and Nagasaki were vaporized in atomic blasts.

Ian W. Toll's narratives of combat in the air, at sea, and on the beaches are as gripping as ever, but he also takes the listener into the halls of power in Washington and Tokyo, where the great questions of strategy and diplomacy were decided. Lionel Barber of the Financial Times chose the second volume of the series (The Conquering Tide) as the preemiment book of 2016, calling it military history at its best. Listeners who have been waiting for the conclusion of Toll's masterpiece will be thrilled by this final volume.

Way more than an ordinary human needs to know about the war in the Pacific. Perfect for Buffs like me.

My father survived 2.7 years on the USS Baltimore. All his tales of Kamekazis,. typhoons and giving Hershey bars to children in the ruins of Hiroshima are in the book just as he described. So too the less than wonderful sides (racism) of many shipmates. As a Jew he was in many fist fights with antisemites, especially from the South. He came home to the Bronx very committed to fighting racism.

The Epilogue is particularly insightful.

BTW, Dad survived all the above, had 3 kids, 10 grandchildren and 1 great grandson when he was killed by a texting driver at age 91. Kamekazis couldn't kill him but a texter did.
Please don't text while driving.

Picks up right where the last one left off. The narrative and organization create a great flow to this long book . You can almost feel yourself zooming in from the overall picture of the war down to buck privates and seamen.

I’m one of those wwii avid reader types and was worried about reading long chapters on battles I was pretty familiar with . Toll brings new perspectives and details about the Pacific War. From the bloated flies of Saipan infesting an admirals dinner offshore to an in depth look at Japanese social psychology for waging war this book brought to light the war in the Pacific . I also appreciate Toll’s research on the logistics involved in the Pacific Theatre.

As with the two prior volumes I felt I was experiencing the Pacific war through the eyes of the Americans and the Japanese. The brutality and otherworldliness of the fighting seemed more immediate. It certainly Leaves the reader with a sense of the horror of war. One can't look at a successful war as a grand thing
US naval and air superiority means there is never any doubt that Japan will lose the war. The Japanese challenge is reconciling its defeat with its national character.
The brutality of the amphibious landings on Iwo Jima and Okinawa show how terrible the battles were for both sides. Clearly the American population advantage and industrial capacity make the outcome inevitable but the Japanese character makes its surrender difficult even after the atomic bombs. Even the emperor's decision to surrender was meet with a threatened coup.
Neither MacArthur or Halsey comes off without character flaws.
The book ends with the return of the American veterans. They faced challenges getting home and greater challenges when home. Clearly the war changed America in ways never expected. Woman experienced more freedom and we're often unwilling to return to their former roles. Ultimately that post war freedom and the introduction of the pill in the sixties gave birth to contemporary feminism.
The returning Black soldiers faced special challenges. The equality they had experienced at war was often rescinded when they returned home. The struggle for a colorblind society is an ongoing challenge.
I found the book thought provoking and I appreciate the time and effort poured into it by the author.

The writing places you in the SW Pacific, Iwo Jima, and Tokyo Bay. A great finish to an already superb series.

The bravery of boys charging into battle, fighting enemies both real and psychological, is quite impressively told by Toll.

General Wainwright’s reaction, after 3 years in a POW camp in Japanese occupied China, to the USS Missouri leaves the reader understanding how awesome the US war production was in 3 short years.

I have an advanced degree in military history. I found all three of Mr. Toll's books on WWII in the Pacific well written, very competently performed, and entertaining. So, all I can say is Outstanding! I wholeheartedly recommend all three books with no reservations for others who have any interest at all in this subject matter.

This series about the Pacific War is the finest combination of writing about strategic and personal stories that I have ever read . . . and I read almost exclusively about the history of war and its leading historic figures. The cast expanse of this trilogy is breathtaking but it reads smoothly and efficiently. I learned so many new details about all of the battles that it is almost like I had never read anything previously about the Pacific War.

I have read hundreds of accounts of the Second World War and this ranks as one of the best series I have every read or listened to during my quest to understand what truly occurred during this period in American History.

Exhaustive History of the US Pacific Campaign

Exhaustive 3 volume history of the Pacific campaign in World War II...this being the third and final volume. If you have 2-3 months to devote to the war...this is your book series.

It was mezmorizing to listen to the War chapters of the Greatest Generation. Excellent Read

For someone with significant prior knowledge of WWII this book is a must. it ties the entire timeliness together, and goes into so many aspects of the war that are not covered in other books. Of note are sections on impact of war on homeland Japan.