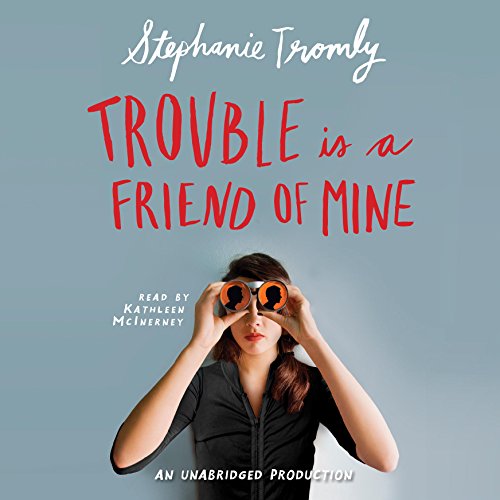 "I am in awe of Tromly because of what she has pulled off - a funny, realistic teen crime caper. Do you know how hard it is to get those right? It's basically impossible. But this book sings." (Jesse Andrews, author of Me and Earl and the Dying Girl and The Haters)

"In what reads like a combination of Veronica Mars and The Breakfast Club, debut author Tromly creates a screwball mystery with powerful crossover appeal." (Publishers Weekly, starred review)

"This debut novel sparkles. Absolutely nothing slows down the pace of this outrageous romp.... This is one of those rare books that promises something unique and actually delivers beyond expectation. At least one copy belongs in every young adult collection." (VOYA, starred review)

Sherlock meets Veronica Mars meets Ferris Bueller's Day Off in this story of a wisecracking girl who meets a weird but brilliant boy and their roller coaster of a semester that's one part awkward, three parts thrilling, and five parts awesome.

When Philip Digby first shows up on her doorstep, Zoe Webster is not impressed. He's rude, and he treats her like a book he's already read and knows the ending to. But before she knows it, Digby - annoying, brilliant, and somehow attractive? - has dragged her into a series of hilarious and dangerous situations all related to an investigation into the kidnapping of a local teenage girl. A kidnapping that may be connected to the tragic disappearance of his own sister eight years ago.

When it comes to Digby, Zoe just can't say no. Digby gets her, even though she barely gets herself. But is Digby a hero, or is his manic quest an indication of a desperate attempt to repair his broken family and exercise his own obsessive-compulsive tendencies?

A romance where the leading man is decidedly unromantic, a crime novel where catching the crook isn't the only hook, a friendship story where they aren't even sure they like each other - this is a contemporary debut with razor-sharp dialogue, ridiculously funny action, and the most charismatic dynamic duo you've ever met.

Trouble Is a Friend of Mineに寄せられたリスナーの声

I am far from a young adult, but was looking for a second title for a 2-for-1 credit offer, so chose this. It has some vivid characters and a twisty plot that made it a very enjoyable listen.

Great story, well written, mysterious, funny, angst, teen crush, great characters and Digby is hilariously wonderful and just the right amount of everything is in this book. Thanks Stephanie Tromly, you've gained a fan! Best and most wonderful narration by Kathleen McInerney, she is always amazing.

The story really is a cross between Sherlock Holmes and Veronica Mars. The story is great and several funny scenes.

However, every dialogue words are entirely “said”. I'd like to count the number of times the word “said” is used in the book. “He said, I said, Digby said, Henry said, Sloan said she said”. It’s awful and almost made the story unlistenable. I really hope the author's editors address this in future books. It's not difficult to use words like “asked” “mumbled” “responded” “insisted” “agreed” ... a thousand other words could have been used besides “said”. This is elementary school basics of story writing.

This book has it all-humor, mystery, love triangles, and action. I love how clever it was, and that it made me laugh out loud. Just buy it!

For age appropriateness, I’d say it’s a mild PG-13. No sex scenes, very little swearing, a few lude jokes, and just the nature of the book being about missing children. I’m 30 and loved it. I don’t listen to YA books much because of immature drama-this book isn’t like that. Pretty quickly in I already knew I wanted to buy the second book. New favorite series!

Had some moments that were interesting, but overall was just ready for it to end.

A new favorite for YA mystery lovers

This book is a mix of elements from familiar stories in the genre, but I don’t think that familiarity detracts from the story. There’s a smacking of everything I love —the banter, the teamwork, the hero (Sherlockesque antihero?) always looking out for the underdog.... there’s one thing I don’t love: the catty interaction of the female characters. But it’s not cut and dry, and the author makes it clear that it’s coming from places of vulnerability. Anyway, I can see that the characters will continue to grow. I’m hooked! off to download The next in the series