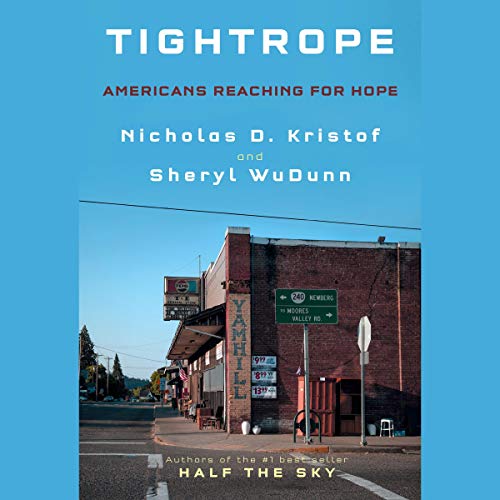 "Actress Jennifer Garner narrates with finesse and restraint as she delivers harrowing scenes of poor Americans acting rashly and sometimes violently in the face of their daily struggles. Her tempo and cadence are also just right for the parts of this work that are a more sociological approach in detailing the harsh economic realities of America's rural poor.... This fine audiobook matters." (AudioFile Magazine)

“While [Kristof and WuDunn] cover policy failures of the last half-century, they also affirm that we’re no longer dealing in Republican or Democratic issues, but issues of Americans’ very survival. . . . Highlighting successful small-scale programs, they emphasize that there are potentially nationwide solutions. Both researched and personal, this will be hard for readers to stop thinking about.” (Annie Bostrom, Booklist, starred review)

“With compassion and empathy, [the authors] pull readers into the lives of families who have been in a downward spiral for several generations. . . . They bring a human face to issues such as drug addiction, incarceration, family dysfunction, and declining prospects for employment. Enlightening for all concerned Americans.” (Caren Nichter, Library Journal, starred review)

“While acknowledging the need for personal responsibility - and for aid from private charities - the authors make a forceful case that the penalties for missteps fall unequally on the rich and poor in spheres that include education, health care, employment, and the judicial system; to end the injustices, the government also must act. . . . An ardent and timely case for taking a multipronged approach to ending working-class America's long decline.” (Kirkus)

The Pulitzer Prize-winning authors of the acclaimed, best-selling Half the Sky now issue a plea - deeply personal and told through the lives of real Americans - to address the crisis in working-class America, while focusing on solutions to mend a half-century of governmental failure.

With stark poignancy and political dispassion, Tightrope draws us deep into an "other America". The authors tell this story, in part, through the lives of some of the children with whom Kristof grew up in rural Yamhill, Oregon, an area that prospered for much of the 20th century but has been devastated in the last few decades as blue-collar jobs disappeared. About one-quarter of the children on Kristof's old school bus died in adulthood from drugs, alcohol, suicide, or reckless accidents. And while these particular stories unfolded in one corner of the country, they are representative of many places the authors write about, ranging from the Dakotas and Oklahoma to New York and Virginia.

But here, too, are stories about resurgence, among them: Annette Dove, who has devoted her life to helping the teenagers of Pine Bluff, Arkansas, as they navigate the chaotic reality of growing up poor; Daniel McDowell, of Baltimore, whose tale of opioid addiction and recovery suggests that there are viable ways to solve our nation's drug epidemic. Taken together, these accounts provide a picture of working-class families needlessly but profoundly damaged as a result of decades of policy mistakes. With their superb, nuanced reportage, Kristof and WuDunn have given us a book that is both riveting and impossible to ignore.

Important topic. Relate to story as one who escaped and saw hometown decline. Solid issues all will agree, but too much blame on conservatives diminishes the writers credibility as independent thinkers. Understandable as writer has to appeal to left as right will see ny times and ignore. A moderate will learn, identify cause and effect and easily toss the propaganda. But the real story is the hopeless divide between left and right. Proven successful actions to help will again be overshadowed by conjecture

A must read! Everything that is holding is back is FIXABLE! Unless we start to address the issues that most people are making their money off of we will ALL fail! We are ALL a part of the problem.....but we can ALL fix the problems as well.... we ALL need to give a shit! We can’t do it alone!

Kristof and WuDunn have used case studies from their own experiences, supplemented with examples from hopeful initiatives in other parts of the country to write a salutary riposte to “Hillbilly Elegy” and a useful follow-up to “Janesville”. The questions they pursued were, why do some people fall out of the middle class into poverty? Why do some in poverty rise and others sink further into despair? They look at society’s core institutions—incarceration, health, education— and the policies that shape how citizens prosper or fail as a result.. At the end, they provide a useful list of things a reader can do immediately to foster hope and growth. We are fortunate to have their intelligent probing into areas many worry about. Don’t miss this one!

Very well researched. Intelligently written. Thoughtfully presented. A clear look at the issues of poverty and the policies that have long betrayed the American people. Well done. Jennifer Garner is the perfect narrator.

Excellent solutions for the real issues we face,

Excellent description of and solutions needed to help the vulnerable among us, without the usual partisan attack rhetoric.

Great research with valid up to date information. love Kristiff's work and this expose with his wife is phenomenal.

Essential reading for every American

This is a passionate and extremely well researched work of the heart and moral fiber of two outstanding people. They grew up with some advantages, but without many others and haven’t forgotten their roots and those of many friends and neighbors who never made it out of poverty, dysfunctional families and the many travails of the poor and undereducated. They take a systemic look at the way we’ve made extremely poor policy and economic decisions in the US, leading to a heartbreaking waste of human lives and human capital. We’re only as strong as our weakest link and we as a country need to wake up to the relatively simple task of repairing those weak links! Read it now!!

Shocking data and a clear analysis frightened and saddened me. Thanks to the hopeful inclusion of evidence-based proposals that are already working in other countries, I closed this book determined to be a part of the solution. Kristoff and WuDunn are already highly regarded in their fields, and they should be recognized for the light they have cast into our darkest corners. This work is one of the most important contributions added to this critical national conversation.

A much needed hopeful story!

Possibly the most important book of our time! Well written, informative, and finally a spark of hope in a troubled world.

The answer to Broken America

If you want to know what is wrong with America right now, read this book. Provides a sobering honest look at why America is where we are and why. Every American should read this book.