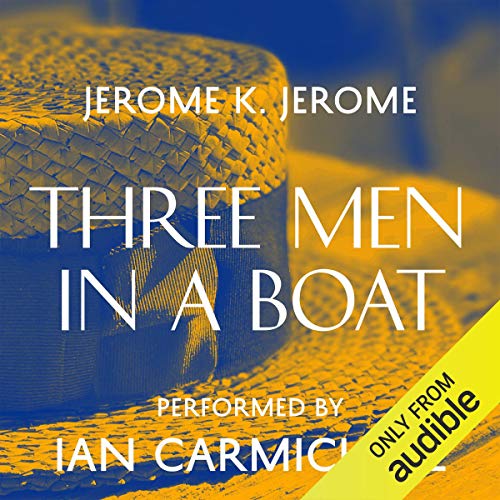 Three Men in a Boat

In this comedic masterpiece, three young men, increasingly given to thoughts of hypochondria, decide to embark on a journey along the river Thames.

Confident that the fresh air and daily exercise will grant them immunity from a myriad of illnesses and diseases, they pack up their frying pans, toothbrushes, food and canine companion, Montmorency, and set off on an unexpected adventure.

As the men come up against hilarious and often avoidable obstacles on their journey from Kingston upon Thames to Oxford, Jerome K. Jerome offers listeners a unique look back at the joys of youthful naivety, comradery and playfulness.

Supremely English in nature, Three Men in a Boat, paved the way for the later works of authors such as James Thurber, PG Wodehouse and Nick Hornby.

Based on a real-life experience, Jerome's comic approach to this story transcends the passage of time as his themes and subjects remain universal. An explorer of new ideas and customs, Jerome K. Jerome developed great insight along his travels throughout Europe and the sheer plausibility of his stories serves to enhance the comedic effect of his writing.

As an international best-selling title, Jerome K. Jerome's Three Men in a Boat was met with such immediate success that it has never been out of print since its publication in 1889.

Ian Carmichael was a veteran comedy actor, best known for his roles in Private's Progress, I'm All Right Jack, Brothers in Law and School for Scoundrels.

He played Dorothy L. Sayers' gentleman detective, Lord Peter Wimsey, on television and radio and his audiobook narration of these stories can be found on the Audible website.

Ian was classically trained at the Royal Academy of Dramatic Arts and after a brief stint in the Royal Armoured Corps during the Second World War, he graced stage, screen and radio for over 50 years.

He was and remains a national treasure and was appointed an OBE in the 2003 Queen's Birthday Honours List.

"[Narrator Ian] Carmichael, the quintessential English gentleman, captures perfectly the delicious inanity of our intrepid heroes' conversations and the bemusement of the locals they meet along the way. He conveys beautifully Jerome's evocative, almost wistful, descriptions of Thames-side towns whose august historical pasts illustrate the glory that was Britain. This delightful performance crystallizes the author's humor and vision and is sure to enchant its audience." ( AudioFile)

Would you listen to Three Men in a Boat again? Why?

I will listen to Three Men in a Boat many more times in the future. This book was written pre-1900, but I love it's timeless sense of humor. Many things have changed since then, but human nature is still the same. And Ian Charmichael does a fantastic job of bringing the story to life.

Montmorency, the dog, is a delight. Jay, the Point of View character is a great deal of fun as well.

Which character ??? as performed by Ian Carmichael ??? was your favorite?

I think that Ian Carmichael brings a feeling of reality and importance to George that I hadn't noticed when reading the paper version of the book.

Entertaining performance. Although I found the story lots of fun, it is dated and becomes a little laboured in its humour. A nice idea for a narrative but a little tedious for me as the story progressed. Beautifully performed and that does keep the listener interested. I'm glad I've experienced this story as it does give the reader a sense of time and place which is fascinating. The characters are humourous caricatures but I did not warm to them as much as I expected. I got the feeling the writer was playing for laughs rather than being funny after a while. Fun and interesting in its own way however. Worth a listen regardless of its being rather stereotypic.

It's verbose, but it's Victorian so one would expect that, and the funny parts are in the deadpan details. The reader makes me believe he is actually the story's narrator, a young man who wants very much to believe himself capable and dashing.

The narrator tells a very brief story with so many tangents that it runs on and on, and I giggled each time he recalled himself back to the main story line. Very funny, and well worth a listen with this narrator.

One of the few cases where the narrator outshines the book, and the book is pretty awesome.

Excellent book, with Ian Carmichael's narration perfect for the style. Very much like attending a 19th Century five-hour observational comedy show (I would imagine). Break out the Pimms, give the dog a biscuit and sit back and enjoy.

Having read this book quite a number of years ago and the remembrance of enjoyment, it was with hesitation that I took up the audio book. It's always a danger of having a poor impression, not because of the quality of the writing or reading but because it is not read in the same "voice" that you read to yourself in your head.

It was however a joy to "read". Ian Carmichael so very much captures the language and keeps the flow of the story running like a comfortable chat by the fire in the gentleman's club.

I was taken aback by some reviews that make comments such as "Slapstick and Sentimentality" when there was little if any of either. The story makes most of its humour from what is read between the lines and not said outright. The story teller is trying to embellish a story to make themselves look good and pass on advice but the audience (you and I) sees through this to what is really going on and it is this that is funny.

The joy of this book is in the language, the phrasing and the ability to create a picture precisely what is taking place and carry you along with it with a smile on your face.

A Review of this version of the book!

This book is superbly read by Ian Carmichael, not Hugh Laurie as stated by another reviewer!

A terrifically well written and funny period piece - in no way slapstick, it's humour is based upon language and anecdote and I found it an easy and delightful book to listen to.

Please at least get the narrator right before commentating on a recording.

great Performance, from one of the great English comic actors, one of my top books brilliantly done

One of the very best comic novels, brilliantly narrated by Ian Carmichael. Have listened to the performance twice, and will do so again .

One of my all time favourite books which makes me laugh out loud each time I read it. I was wary of an audible version but the narrator was perfect. I laughed out loud and will listen to this again I know. Joyous!

I was doubtful whether I would enjoy an audio book of this, one of my all time favourites. I am very glad I bought it, Ian Carmichael reads it superbly. Some narrators can be awful, this one is great.

A Classic, ‘read’ as spoken word

This was a story on my list of classic books that I felt I ought to read but my penchant for thrillers always took me in another direction. However, eventually it came to the top of the list. I can’t describe it as a pager turner, I mean, I wasn’t kept on the edge of my seat or up until 3am avidly reading it. Nonetheless I carried on to the end, rather to my surprise. It’s not so much one story but rather a collection of anecdotes, recalled to the mind of the author by association with something which occurred during their booking holiday on the River Thames. Most made me smile and a few made me laugh out loud. I felt I was acquiring an insight into the era - the author makes reference to the 19th century at one point.

Ian Carmichael read it fluently and with energy and emotion. He was quite mellifluous on some of the graphic descriptions, which added depth to the author’s prose.

I enjoyed it overall and I’m glad I finished it.

I love listening to Ian Carmichael. Always a joy. He just makes this excellent book even better.

Having tried this once in written form, and failed to complete it, I returned to it again after reading Connie Willis’ To Say Nothing of the Dog. The narrator, Ian Carmichael, is so good that the book was a pleasure right to the end this time. I recommend both!

Ian Carmichael's performance is simply brilliant. However, he does have wonderful material to work with. The book is one of the funniest things I have ever listened to. The stories about the man travelling with two large, smelly cheeses and the one where the author is in a library working his way through a medical dictionary to determine what's wrong with him are just two of the priceless gems in this book. I don't think anyone would be disappointed after buying this.