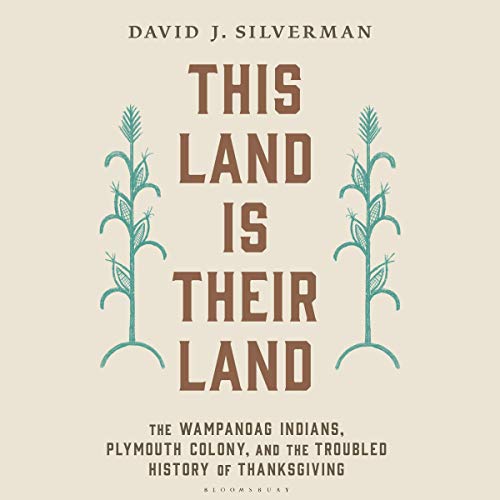 Bloomsbury presents This Land Is Their Land by David J. Silverman, read by William Roberts.

Ahead of the 400th anniversary of the first Thanksgiving, a new look at the Plymouth colony’s founding events, told for the first time with Wampanoag people at the heart of the story.

In March 1621, when Plymouth’s survival was hanging in the balance, the Wampanoag sachem (or chief), Ousamequin (Massasoit), and Plymouth’s governor, John Carver, declared their people’s friendship for each other and a commitment to mutual defense. Later that autumn, the English gathered their first successful harvest and lifted the specter of starvation. Ousamequin and 90 of his men then visited Plymouth for the 'First Thanksgiving'. The treaty remained operative until King Philip’s War in 1675, when 50 years of uneasy peace between the two parties would come to an end.

400 years after that famous meal, historian David J. Silverman sheds profound new light on the events that led to the creation, and bloody dissolution, of this alliance. Focusing on the Wampanoag Indians, Silverman deepens the narrative to consider tensions that developed well before 1620 and lasted long after the devastating war - tracing the Wampanoags’ ongoing struggle for self-determination up to this very day.

This unsettling history reveals why some modern Native people hold a Day of Mourning on Thanksgiving, a holiday which celebrates a myth of colonialism and white proprietorship of the United States. This Land is Their Land shows that it is time to rethink how we, as a pluralistic nation, tell the history of Thanksgiving.

This Land Is Their Landに寄せられたリスナーの声

A story as believable as it is tragic

After listening to Silverman's story of the Wampanoag's centuries with the English and their biological and cultural descendants, I feel both despair and hope. The despair is in that the fact that story of this particular encounter between Native Americans and Europeans is so familiar and universal. In its essentials, it is repeated in so many times and places, and into the present day. I credit Silverman's scholarship and excellent writing with keeping me entranced enough to endure this awful story. The hope I mentioned springs from the knowing that there are still Wampanoags living in their homeland, and that they are strong enough to continue the struggle.

This factual presentation is lasting

Once you start reading this book it is likely you will continue with it to the end—this is gripping documented history that will have you on the edge of your seat in some parts, and shaking your head in others at how stupid humans can be. The time period covered is from near pre-history to our own contemporary time. Prepare for a clear eyed view of New England history (Hint: It's not peace and love between whites and Native Americans at a first Thanksgiving). The English and the Indians each had their faults, both moral and cultural; the differences appear to be in power and willingness to use it, exacerbated by different concepts of private and communal—as it still is today.

David J. Silverman is open about his thorough approach to historical documentation, and the Native American and English sources consulted to produce the most accurate account possible with currently extant sources. This adds to the confidence the reader may have in the veracity of the content in this book. The effect of this factual presentation is lasting.

From the historical account in this book it appears to me that "King Philip’s War (Metacom’s Rebellion)" in 1675-1676 was the inflection point for the acceleration of Native Americans' downward spiral from being independent nations. After that it was not much of a stretch to see the future coming of the Trail of Tears perpetrated by Andrew Jackson against Native Americans in the South—for the same expansionist reasons.

Zoom out from the narrative and you may see in the Europeans remnants of the Roman Empire, with its impetus for military conquest and taking of slaves. After Constantine it was a common presumption that the Empire was one and the same as the Kingdom of Jesus. The Native Americans who were "Praying Indians" embraced Christianity without the perspective of being part of European oriented Christendom—they studied the Bible and applied the Gospels through other than a European lens.

One possible result of the 21st Century thoughts described in this book might be the reorientation of our Thanksgiving holiday. We may dispense with the silly Pilgrim/Indian motifs, and instead embrace a Thanksgiving for all humanity. Let's hope that is sooner than later.