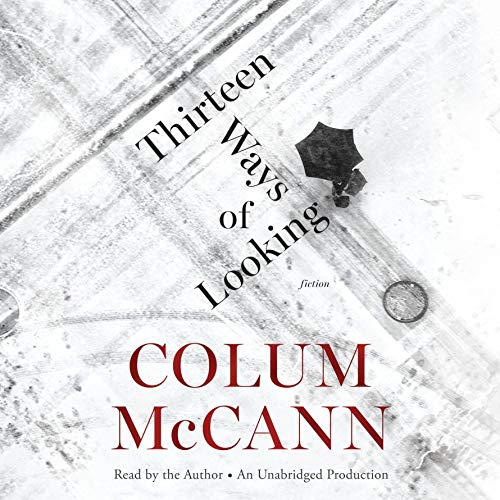 “McCann is a writer of power and subtlety and beauty.... The powerful title story loiters in the mind long after you’ve read it.” (Sarah Lyall, The New York Times)

“[McCann] unspools complex and unforgettable stories in this, his first collection in more than a decade.” (The Boston Globe)

“McCann is a passionate writer whose impulse is always toward a generous understanding of his diverse characters.” (The Wall Street Journal)

In such acclaimed novels as Let the Great World Spin and TransAtlantic, National Book Award-winning author Colum McCann has transfixed listeners with his precision, tenderness, and authority. Now, in his first collection of short fiction in more than a decade, McCann charts the territory of chance and the profound and intimate consequences of even our smallest moments.

"As it was, it was like being set down in the best of poems, carried into a cold landscape, blindfolded, turned around, unblindfolded, forced, then, to invent new ways of seeing."

In the exuberant title novella, a retired judge reflects on his life's work, unaware as he goes about his daily routines that this particular morning will be his last. In "Sh'khol", a mother spending Christmas alone with her son confronts the unthinkable when he disappears while swimming off the coast near their home in Ireland. In "Treaty", an elderly nun catches a snippet of a news report in which it is revealed that the man who once kidnapped and brutalized her is alive, masquerading as an agent of peace. And in "What Time Is It Now, Where You Are?", a writer constructs a story about a Marine in Afghanistan calling home on New Year's Eve.

Deeply personal, subtly subversive, at times harrowing, and indeed funny, yet also full of comfort, Thirteen Ways of Looking is a striking achievement. With unsurpassed empathy for his characters and their inner lives, Colum McCann forges from their stories a profound tribute to our search for meaning and grace. The collection is a rumination on the power of storytelling in a world where language and memory can sometimes falter, but in the end do not fail us, and a contemplation of the healing power of literature.

Praise for Thirteen Ways of Looking:

“The irreducible mystery of human experience ties this small collection together, and in each of these stories McCann explores that theme in some strikingly effective ways.... [The first story] is as fascinating as it is poignant.... [The second] captures the mundane and mysterious aspects of shaping characters from the gray clay of words, placing them in realistic settings and breathing life into their lungs.... That he makes the story so emotionally compelling is a sign of his genius.... The most remarkable [piece] is Sh’khol.... Caught in the rushing currents of this drama, you know you’re reading a little masterpiece.” (The Washington Post)

My favorite book of the last 5 years is McCann's Let the Great World Spin. I love his work. Listen to McCann read Thirteen Ways of Looking is a pure treat!


This is a mesmerizing collection of a novella and three short stories. Irish author Colum McCann's radiant prose seems the consummate soother of the ever-shuffling soul while his stories stir one's deepest sentiments: a child disappears overnight from his mother's bed at a seaside resort; a writer goes through the stop-and-go process of writing a short story on distant lovers; a nun faces her fears and resentments after seeing her South American captor/rapist on a televised "peace" press conference 30 years later; and, in the eponymous novella, an elderly, retired and widowed judge's stream of consciousness on the day of his murder brilliantly mixed with a third person narrative of the NYPD detectives' investigation.

A quite humorous and breezy sample from the novella -- the Judge's inner dialog describing his disappointment with his son Elliott:

“He took a trip ... up to ... Elliott's house, his mansion rather. Awful place, twelve bedrooms and swimming pool and media hall and five car garage, but cheap and shoddy all the same, like the one next door and next door to that. A row of Ikea houses, such wealthy mediocrity. His very own son. His big, bald son. Who could believe it. The bigness, the baldness, the stupidity. In a house designed to bore the daylight out of visitors, no character at all, all blonde wood and fluorescent lighting and clean white machinery.

Not to mention his brand new wife, number three, a clean white machine herself. Up from the cookie cutter and into Elliott's life, she might as well have jumped out of the microwave, her skin orange, her teeth pearly white. A trophy wife. But why the word 'trophy'? Something to shoot on a safari.”


The words, particularly as read by Colum McCann, flow over the soul as a north wind ripples a field of shamrocks. In writing this review I searched for an appropos term for a prose narrative that is as poetic and hypnotic as it is profound. One I found should do the trick: a "euphony" (pleasing to the ear, especially through a harmonious combination of words), with the descriptors "heartrending" and "profound."

Colum McCann can span generations in a single paragraph and capture character and depth of emotion like no one else I've ever read. He's a master.

narrative x the writer’s own voice

I enjoy hearing works read by the author. In this case the combination seems exponential. Not 5 stars for each, but 25 stars for both.

I think anyone spending time with someone whose mind is getting gauzy will benefit from the first of the stories.

Colum Mc Cann writes in a poetic, metaphoric and visual style. I want to read all of his works. As a visual artist and one who writes poetry, I find his choice of language and rhythm engaging
and the telling goes deep to the soul of each subject. His work was a great discovery on Audible and I truly enjoy his narration.

McCann captures the essence of humanity.

This collection of Thirteen Ways of Looking is excellent. (I have it in print and Audible).
The author's reading of his work is could not be more lovely. McCann has captured the character and essence of humanity in his stories, so that as wrenching or stunning the subject might be, we are moved and challenged to understand another more deeply.

The title story is a masterpiece

McCann makes a reference to James Joyce’s story The Dead which has been called the greatest short story in English. I would say that Thirteen Ways of Looking is equally well written, equally perceptive and McCann’s reading makes it unforgettable. This is the only audiobook I’ve listened to twice and then bought the book so I could read it. It is a treasure.

This novella and short stories have immediately become favorites of mine. The rhythmic style of writing is unique and the content fascinating.

I was a bit ambushed by this book because I tell people that I don't like short stories in general. It may be a bit odd since I relish great writing, but somehow short stories just don't keep going and I end up disappointed. Well, when I started this book, I didn't know it was a collection -- but when I discovered it, I was more than sucked into it. Each story was better than the previous one -- or so it felt. I shouldn't have been surprised because I have loved everything he has written but these pieces just knocked me out. His use of language is simply exquisite - to the point of my rewinding several times just to hear it again.

As always, reading, or especially listening to Colum McCann’s writing is like immersing yourself in the finest works of art in the Louvre or anywhere else. Thank you!