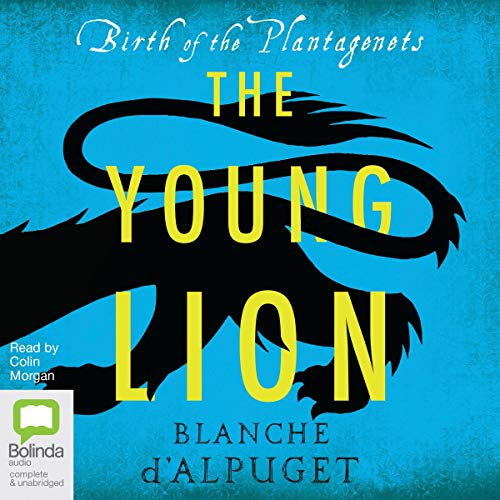 The first book in the Birth of the Plantagenets series is sumptuous, rich historical fiction.

Queen Eleanor of France, said to be the most beautiful woman in Europe, has not been able to give birth to an heir. A strategic liaison with Geoffrey the Handsome, the virile and charming Duke of Normandy, could remedy that - or lead to her downfall and Geoffrey's death.

What begins with cool calculation becomes a passionate affair. Despite his love for Eleanor, however, Geoffrey has larger plans: to help his warrior son, Henry, seize the English throne.

When Henry saves his father from discovery and execution by the French, he falls foul of Eleanor - and madly in love with her Byzantine maid. Should he become King of England, however, this dazzling woman will never be acceptable as his queen.

These intertwined relationships - heated, forbidden and perilous - are the heart of a vivid story of ambition, vengeance and political intrigue set in the glorious flowering of troubadour culture, mysticism and learning that is 12th-century France.

Interesting historical fiction, light on history, heavy on fiction.
The narrator matters! I have about 1000 audiobooks and choose what I listen to as much by narrator as author or story/topic. While I enjoyed the story, I was more enthralled by the unique and varied characters voiced by Morgan. At times I laughed, “there’s that ‘a’ again” or marveled at the ease and rapidity with which he moved among the characters. All the books in the series are long - I’ve finished two - and without doubt the narration has kept me engaged and entertained.

The history was often wrong; however, when Henry spoke to horses and Highlanders via telepathy, no doubt remained that this historical fiction was much more fiction than history .

I really enjoyed this first book about all that could happen amangst France, England and Normandie. The writer goes into a lot of details of all the families involved enriching the plot and the pleasure of the listener. Colin Morgen was again superb in his narration changing tone, voice and tempo when needed. I hope he'll narrate more books for us.

An absolute joy to listen to his lilting Irish voice as it read this magical story. More please.

It is difficult to overpraise this book. It is a long time since I enjoyed a book so much - and it is really instructive in a way that is
very enjoyable.
What a great narrator. I hope he reads the rest of this series when they are written.

Colin Morgan is absolutely superb in this. Each character is individually voiced, with a variety of accents, while the overall narration is a softer version of his native northern Irish. The story is entertaining, although I'm not sure how historically accurate it is. That is unimportant; it's a fun medieval tale, and I hope Colin reads the others in the series.

I thoroughly enjoyed this entertaining and colourful story which brings to life a period of history that is often glossed over these days. The narrator is excellent and breathes so much life into all the characters and situations. It held my attention from beginning to end.

I Loved this book, Colin Morgan's narration was utterly amazing and outstanding. Thank You Colin, I look forward to listening to the 2nd chapter

The many voices of Colin Morgan

Not sure I would have chosen this story if I hadnt been interested in how Colin Morgan would narrate it. I was not disappointed. He brought it alive, what could have been a tale which could have been overwhelming with characters was given a signature voice and personality! Really enjoyed it.. onto book 2!

I enjoyed listening to this book very much. Colin Morgan’s different voices and accents of different characters are amazing, I am happy to hear and watch anything he does.

An enjoyable story and an interesting depiction of French and English court intricacies and politics of the 12th century. The author has done excellent research on the topic and the fact that the story is rooted in historical events is an angle I find interesting. The combination of that and colorful (and dark) fictional characters makes it a great story and the sublime storytelling from the narrator made it very captivating.
Colin Morgan keeps your attention by perfectly emphasizing and changing pace as well as effortlessly shifting between countless individually voiced characters and the voice of the storyteller.
In short: An outstanding performance and a very good story.

Interesting historically but didn't draw me in

one of my first audiobooks. I did enjoy this and certainly got me more interested in the events of the time, but I don't think I will pick up subsequent episodes. Enjoyed the narrator and he did try to make all the characters distinct. There were quite a few so it took time to get used to them. None of them are particularly likeable and it is heavy on the action rather than flowery prose

I absolutely loved the intro to this series, I just really hope audible follows the entire series to its conclusion.

A story told in a way that kept me mesmerised and yearning for more. As it is based on history, it's great! Colin Morgan has a way with words and accents and brings the story to life.