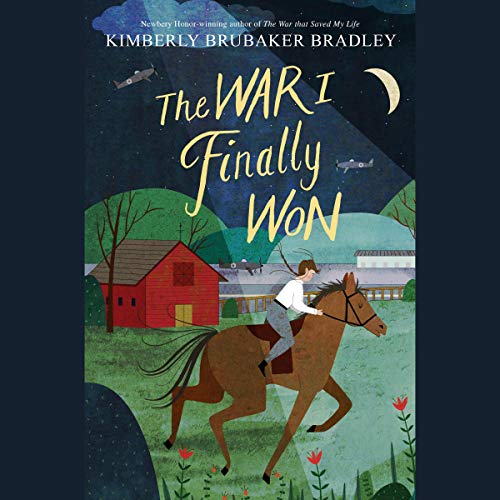 "The poignancy of the story is stunning, as are the author’s wit and eloquence. [Narrator Jayne] Entwistle captures both." (AudioFile)

Like the classic heroines of Sarah, Plain and Tall and Little Women, Ada conquers the home front as her World War II journey continues in this sequel to the Newbery Honor-winning The War That Saved My Life.

When Ada's clubfoot is surgically fixed at last, she knows for certain that she's not what her mother said she was - damaged, deranged, crippled mentally as well as physically. She's not a daughter anymore, either. What is she?

World War II continues, and Ada and her brother, Jamie, are living with their loving legal guardian, Susan, in a borrowed cottage on the estate of the formidable Lady Thorton - along with Lady Thorton herself and her daughter, Maggie. Life in the crowded cottage is tense enough, and then, quite suddenly, Ruth, a Jewish girl from Germany, moves in. A German? The occupants of the house are horrified. But other impacts of the war become far more frightening. As death creeps closer to their door, life and morality during wartime grow more complex. Who is Ada now? How can she keep fighting? And who will she struggle to save?

The War I Finally Wonに寄せられたリスナーの声

I love this book! I am almost 11 and absolutely love this! My teacher recommended it to and I am so glad she did!

I am a therapist by trade. The author clearly has a keen understanding of trauma, attachment and healing, plus she winds it into a wonderful story! I adored both of the books Ms. Bradley has written.

The combination of Bradley's insightful and sensitive writing and Entwistle's ability to bring these characters to life with her expert narration is nothing short of masterful. This is book two in The War Series, and picks up about five days after where book one finished. It's best to start with book one if you are new to the series. Bradley artfully embeds a recap of highlights from book one into the first few chapters of book two--but do yourself a favor and listen to The War That Saved My Life first--it's really a wonderful story.

Bradley continues to create an amazing WWII homefront story. She is able to truly capture these beautiful characters struggling with living outside their comfort zones and learning the complexities of life, personal responsibility and identity. The story deals in such a positive way with the difficult concepts of loss, fear, and hardship. Further, it deftly explores love, forgiveness and complicated feelings of connection.

While this book is listed in children's fiction, I think the title transcends age and is a must listen for lovers of historic fiction. To me, this is not to be missed. Absolute perfection.

this was an accidentally written sequel to the first book. I recommend it to anyone who enjoyed the first book as it continues the story of Ada and her life.

I love this book it is a powerful story
With a great subject
I love it!!

This is a must for all ages!

The War I finally won is a fantastic book for all ages. It is the conclusion of The War that Saved My Life, so I would highly recommend reading that book first to fully understand the story, since it picks up where book one left off.

Ada, Susan and Jamie somehow survived their trip to London and now is the perfect time for Ada to have her surgery to fix her club foot. But now that it is fixed, she is left wondering who she is? Where does she fit into the world she is now living in and how will she manage to see beyond what she has always been told.

With their home having been destroyed, Susan, Jamie and Ada move into a cottage on the Thorton's estate. World War II is in full swing and the ramifications are reaching everyone. Suddenly, Ada finds herself forced to live with Lady Thorton, her daughter Maggie and Ruth. Ruth is a German whom no one in the house trusts because how could they, she could be a spy.

Will Ada give up on life and fail due to her circumstances, or will she persevere and survive it all?

I must admit. I have four children ranging in ages from 11 to 4. As we listened to this audio book, my kids would beg me to drive further, take them on drives or stay in the car longer once we parked to find out what would happen next. Each of my children as well as myself were completely engaged with this story, as well as talking about it long after we finished. Jayne Entwistle brought this story to life with her talent as a narrator. I would highly recommend this to all. The entire story is one that everyone should read (books 1 &amp; 2).


Though these stories are written for a younger audience – this adult loves every minute. I hope Bradley keeps this series going long after the war is over.

The author does a superb job giving just enough back story to the previous series readers and first in the series. This book easily stand on its own - though you WILL be looking for the other one too. I highly recommend this if you are looking for a fast past uncomplicated read, with just the right amount of characters, that at times will keep you on the edge of your seat. Also, if you’re looking for a shared read that has no uncomfortable embarrassing sections.

WWII through the eyes of a child

We loved this more than the 1st book! a great book to discuss with my kids.

I loved The War That Saved My Life, but I loved this sequel even more! Such a moving first-hand account of a terrible time, both globally and personally, for Ada. A touching tale. Brilliantly performed as each character came to life.

I loved it and highly recommend it along with the first ‘The War That Saved My Life’. As an adult I started it to recommend to my 4th grade students but I have found it so worthy that I have decided I will read it aloud to the class. I’m so excited!