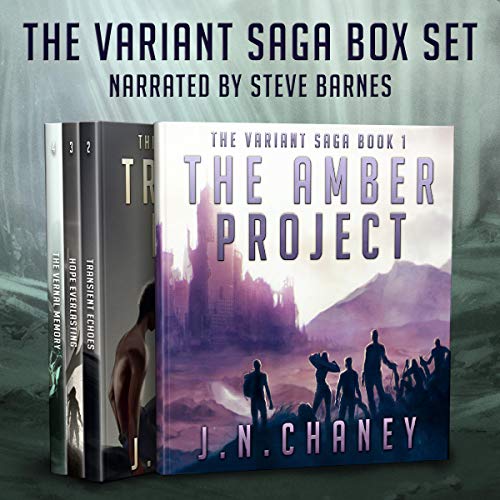 Two-hundred years after the world ends, their future begins.

In 2157, a mysterious gas known as Variant spreads across the globe, killing or mutating most organic life. The surviving humans take refuge in an underground city, determined to return home. But after generations of failures and botched attempts, hope is beginning to dwindle. That is, until a young scientist makes a unique discovery - and everything changes. Suddenly, there's reason to hope again, and it rests within a group of genetically engineered children that are both human and Variant.

Terry is one of these children, modified and trained to endure the harsh conditions of a planet he cannot begin to understand. After years of preparation, Terry thinks he knows what to expect. But the reality is far stranger than anything he can imagine - and what he will become is far more dangerous.

The Variant Saga boxset includes all four books in the series. Over 1,000 five-star reviews. Find out why people are so intrigued by this thrilling dystopian, science fiction epic. You won't believe the twists and turns this saga takes!

This is probably the best dystopian series I've ever read or listened to and it's a shame there's no movie adaptation. Chaney's first series is transformative, with real and complex characters that develop and change over time in ways that feel rewarding and encouraging to the reader. I'm a big fan of his Renegade books, but they are very different from what he has produced here. This series feels more personal, and I think that's why it is so engrossing. The first book takes a little while to get going, but that's because it wants to show you its world and get you in the right mindspace for the journey you're about to go on. Once I finished the story, I kept thinking about the characters and their journey, so much that I found myself dwelling on their experiences long after it was over. I picked up the audio because I wanted to re-experience that journey with a new voice, and I was not disappointed. Steve Barnes delivers a dramatic and moving performance here, and I quite enjoyed the listen. If you're uncertain about this series, please do yourself a favor and give it a shot. It's up there with Red Rising for me, possibly even higher.

Finally getting to enjoy this wonderful series as an audible book. The narrator does a masterful job of bringing Chaney's rich, complex story to life.

Performance is well done. 32 hours of good audiobook for one credit! No brainer.
Chaney writes another interesting universe/world and story.

At age 7 children of the underground city go to the academy. After several years of education they also start some military training, at least Terry's group did. Than they were exposed to a strange gas, finally, everything was explained, before they were sent to the surface after two of their group that ran away. They were told that they had been genetically modified with both the human and the variant strains. They were the last hope that one day people could one day live and repopulate on the surface of the earth again. Meanwhile, Terry's mother is fighting for, and starting a revolt for, the rights of those children and their mother's.
This is a great science fiction book, between the two storylines this book will keep you hopping and cheering for the small guys. The characters are awesome, even the bad guys. I had the audiobook version and I have to give kudos to Alexander Trefethen, he is awesome! His different voices for the different characters really set them apart, he gave this book heart and left me asking, how far would people really go to save the human race?

While the husky tones of the narrator had it's challenges to over come, the store is well worth it. Creative and fast pace you will enjoy the detailed world's. Although a better name for a planet could have thought up.

I have listened first two variant saga books on audible, they are a fantastic read. the boxed set only makes sense.

This is the series that got me hooked on JN Chaney's books! You will too! I feel like it has been so long since I have read this, I need to read them again! Love them!

Another great series by J.N.

Was hooked from the beginning and enjoyed the ride all the way till the end as far as the story was concerned. The narrator was very breathy and had it not been a series by J.N. (which I've enjoyed a few of already) I may not have stuck around.

Are you hoping for a character-driven series with suspenseful, layered drama? Keep looking. This series is the closest book series to cardboard that I’ve ever listened to in probably 100 different titles. The narration can best be summarized as the sound when makes when they lift something too heavy while holding their nose. That’s as close as I can get. I really wanted to like this series, but I can’t understand how it ever achieved any five star reviews. Disappointing.

This was such a great story and great adventure. I loved every part of it and couldn’t wait to listen every day!

Loved these 4 books and excellent value on Audible. The narrator has an annoying way of over emphasising the end of words, but does do a good job of differentiating the different characters with change in pitch, tone and accent. Would thoroughly recommend.

A compelling listen with lots of twists and turns. A real ‘page-Turner’ (or whatever the audible equivalent saying is). Sure you could pick some holes in the plot but there’s no need to, it’s sci-fi after-all. I was put off by the voice of the narrator at first but soon got used to it. It’s definitely worth sticking with it. I would recommend it. Lots of great strong female role models and characters you can care about.

This is an interesting story with very good enaging characters and is well progressed.
The usual survivors story from an apocalyptic event and how they turn to genetic engineering is nothing new ,but how the catastrophe came about and how it ties into the later books gives great engagement and a surprisingly well written story kept me listening.
This is not to say their isn't a few holes but these are minor and dont detract from the listeners overall enjoyment. Due to the length of this you get a proper bang for your buck and a lot of enjoyment.
Narration by Barnes is done well including the female voices always a sticking point for me I find.
I requested this audio and have decided to leave my thoughts.

the narrator reads like he's telling a ghost story around a campfire CONSTANTLY.... its horrendous. I wish I checked the audio before I downloaded. cant even listen to this. it's a shame. anyone who says this is read well has been paid to do so. I am convinced. shame shame. had to rate the story low, because I can't even finish it