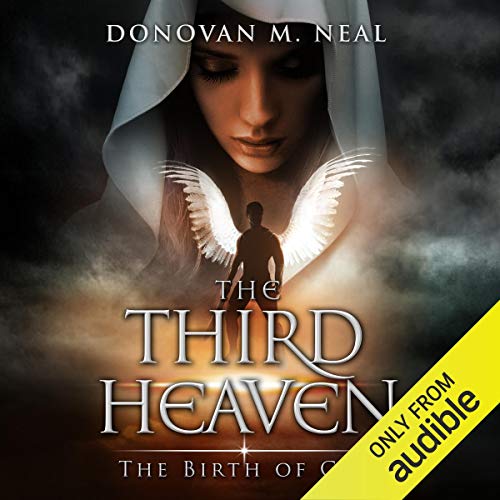 The Third Heaven: The Birth of God

What would you do for love? The sequel to the best-selling book The Third Heaven: The Rise of Fallen Stars is finally here!

Heaven stands decimated by war. Lucifer's exile places mankind at the center of the mad angel's plot to overthrow God.

Meanwhile, Michael must now take on a mantle of leadership that he did not seek and is tested to see if he is worthy of the title of chief prince. Yet, a conflict eats at him as he wrestles with his sworn duty to Heaven and his obedience to God; torn over a vision of a future revealed by the creator himself - a future that shows the death of God. Will Michael succumb to a darker path that once more would plunge Heaven into civil war, or will he trust and yield to the revealed will of God?

For, in order to save humanity and heal the rift to his kingdom, God will make the ultimate sacrifice on behalf of his beloved creation, answering for all time the most powerful questions driving the universe: whom will you serve and whom do you love?

The Third Heaven: The Birth of Godに寄せられたリスナーの声

This brings the Bible names to life. it helps me to realize everything was spiritual before it was physical as the scriptures say. Reading the OT after this brings it to life. We are indeed foolish if we think we can ignore Gods word or our eternal purpose and destiny. This is a good way to get our attention

I think this is a 5 star read because of the performance of the narrator and the imagination of the author. For me it was a bit heavy on the spiritual side of the battle rather than the human, nevertheless I think the author achieved his goal to produce wholesome christian entertainment.

Awesome book - but won’t be buying the next one

Yes, absolutely!! First experience with Biblical fantasy and I am sold on this author. He is Biblically sound and, while he has a great imagination, he does not stray from traditional Church doctrine - which is usually the case.

Chereon (the guardian of hell) was one of my favorites.

Which character – as performed by Angelo Di Loreto – was your favorite?

***I purchased the first two books of this series, but unfortunately I do not plan on purchasing the third book, as the author decided to narrate this one himself. Aside from the writing, the narration was what sold me on the book. I originally returned my first purchase, but was compelled to give it another try based solely on the narration. Di Lorento has an excellent reading voice, perfectly suited for this genre. The author, not so much. If the author ever releases another version with the original narrator, I will purchase it gladly.

The first book was really good but this one is fantastic! It feels anointed and you can feel the presence of God while you listen. The perspective is jaw dropping. When I am finished with the third book I will listen to all 3 again! I never do that! These are masterpieces that should be movies. 5 stars!!

These 2 Awesome Books are Awesome

I throughly enjoyed these 2 books though I am glad I did it through listening to it, because I don’t believe I could have said, or even pronounced all of it, which I would have missed a lot of what you may saying. I am glad you put a glossary in the 2 book, but I think it would have been more useful to understand of the book,but nevertheless the less, I still sufficed by still putting it in the second.
I also say your voice in telling the novel is incredible awesome as well.
When I first listen to this on my laptop, it even had all the background ,but when my laptop unexpectedly and suddenly died, I was glad and thankful I still had a an iPad to continue to listen to it all the way through, the only difference the iPad doesn’t give the background effects, but still from me, I give you on all 3, 5 Stars on each. Has this novel ever been put into a an epic on TV to see as a mini series or movie? Do indeed make more. As I can only say it, Performance, Story, and Overall are Awesome! Congratulations! Sr. M. Anthony

The birth of God- outstanding

Couldn't put it down until I was finished. Gives you a lot to think about.

This is why God gave us imagination.

This is why God gave us imagination. Excellent story. This story can spark interest in God's word which will save your eternal soul.

Love the book, love the narrator. The book comes to life. I caught my kids listening while we were driving. I thought they were watching their movie in the back, but they were listening to the story. I love this author, and he surely picked the right narrator. I could not wait for my next audio book credit, so I just paid for this one. I will read everything this writer puts out.

These books have always fascinated me and especially this story. The detail put into and the very descriptive way This was laid out engaged my mind throughout the first two books.. I have never given a review of a book before but the narrator and author are very good and I would recommend this book to anyone who likes biblical fiction..with the historical bible background it gives.. Bravo! Chaps Bravo!

This series is amazing and thought provoking!!
Always excited to continue listening to new addiction(s) to the series. Also is helpful in my personal Spiritual growth and development.
Thank you for your insights and storytelling!
Highly recommend!!!

I really enjoyed this book it was a great find.

I kind of love story's about God and his angels plus mankind and the world. even tho it's a story it's fact in some cases. I am definitely a believer in God and jesus. I have looked time and time again for books like this and to be honest there isn't any. I have listened to the first book and also the second and I think they are both great and I really do hope there are many books by this writer he has definitely done a great job

fantastic fiction but helpful and enjoyable