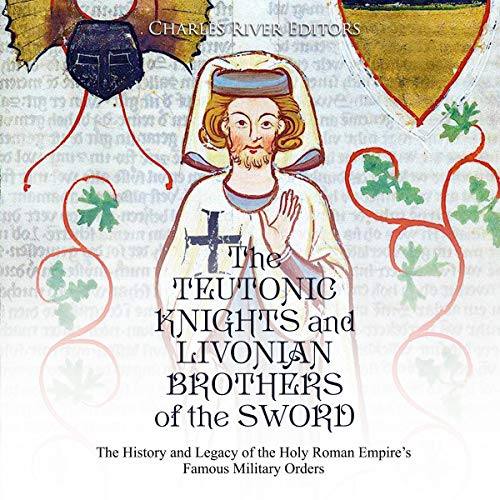 The Teutonic Knights and Livonian Brothers of the Sword

As the dissipating fog gave way to an unnerving sight, the mass of frightening figures clad head to toe in gleaming armor would have been enough to take anyone's breath away. Some of them were mounted on the backs of handsome stallions, while others leaned forward with squared shoulders, ready to attack. In one swift motion, the men unsheathe their swords and raise it over their heads, their weapons winking as the glare of the sunlight bounces off the blade.

To the somewhat trained eye, these warriors in Norman-inspired gear would have appeared to be one of the Crusader forces, but it is that bold black cross painted across their chests and shields that give them away. These men were none other than the fabled Teutonic Knights. The knights of the Teutonic Order have since been compared to the surreal creature that appeared to the biblical Ezekiel, one that bore 2 faces - one of a man's, and one of a lion's. The human side of the creature is said to symbolize the order's charity, whereas the lion was a metaphor for its valor and gallant spirit, which they relied on to vanquish the heathens of the world.

Like other secretive groups, the mystery surrounding the Teutonic Knights has helped their legacy endure. While some conspiracy theorists attempt to tie the group to other alleged secret societies like the Illuminati, other groups have tried to assert connections with the Teutonic Knights to bolster their own credentials. Who they were and what they had in their possession continue to be a source of great intrigue even among non-historical circles.

Although many have heard of the Crusades and some of the more famous orders like the Templars, few know about the Livonian Crusade or the Livonian Brothers of the Sword. This organization was one of many Catholic military orders that sprung up during the Middle Ages in response to the papacy’s call for holy war, and the Livonian Crusade is the term used to group together dozens of military actions undertaken by German knights in Eastern Europe.

In essence, the Holy Roman Empire sought to control influential trade routes throughout the region by subjugating the native peoples and forcefully converting them to Christianity, and in this regard, the differences between the Livonian Crusade and those taking place further east, where crusaders attempted to retake the Christian Holy Land of Jerusalem, are readily apparent. In particular, there was no actual religious justification for the Livonian Crusade, and many of the knights deciding to join were often more interested in the political and economic benefits gained from the war. When it comes to understanding the history of the Livonian Brothers of the Sword, scholars have their work cut out for them, as few primary sources survived the conflict, and the order has had many different names over the years, including the Swordbrothers, the Livonian Order, and the Swordbrothers.

All that said, the Livonian Brothers of the Sword bore many similarities to their counterparts in other countries, including being affiliated with the Catholic Church. Many of the knights took vows of celibacy and poverty, and the internal structure of the organization could be compared to the Knights Hospitaller or the Templars. Moreover, while relatively few people know of the Livonian Brothers of the Sword by their original name, the order would go on to become one of the most influential of religious knighthoods by incorporating into the Teutonic Knights. The order was also significant for consolidating the power of the Holy Roman Empire in Eastern Europe, as well as subjugating the native peoples and spreading Christianity by force, leading to numerous tensions that lasted centuries between the future nations of Estonia, Prussia, and others.

The Teutonic Knights and Livonian Brothers of the Swordに寄せられたリスナーの声