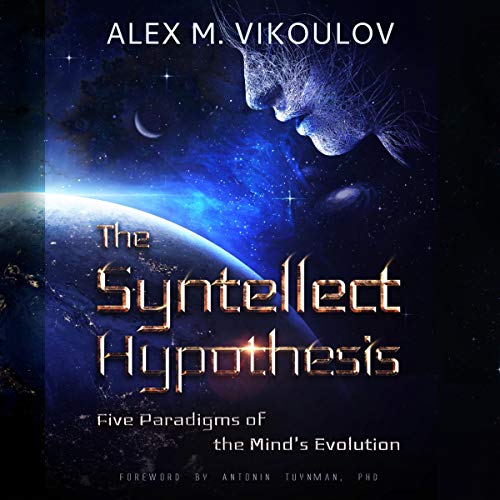 In one volume, the author covers it all: from quantum physics to your experiential reality, from the big bang to the omega point, from the "flow state" to psychedelics, from Lucy to the looming AI singularity, from natural algorithms to the operating system of your mind, from geoengineering to nanotechnology, from anti-aging to immortality technologies, from oligopoly capitalism to Star Trek-onomics, from The Matrix to universal mind, from Homo sapiens to Holo syntellectus.

This is an essential listen in digital physics, foundations of quantum physics, science of consciousness, philosophy of mind, physics of time, phenomenology, economic theory, cybernetics and AI research, collective evolution, and self-development in the information age.

Despite a dozen of neologisms, readily explained by given definitions and contextually, the book is an exceptionally easy listen for an intellectual listener. Alongside with the syntellect hypothesis, as the author's main contribution to the scientific and philosophical dialogue, you'll encounter the conscious instant hypothesis and the temporal singularity, experiential realism and the mental universe hypothesis in regards to our phenomenological experience; the noocentric model challenging the centuries-old Copernican heliocentric model; the chrysalis conjecture as his solution to the Fermi paradox; D-theory of time, or digital presentism, as his fresh perspective on temporal ontology and the physics of time; the mind-bending digital pantheism argument, exponential evolution, and the omega point cosmo-teleology.

Alex Vikoulov and I have read all of the same books. His book the Syntellect Hypothesis is very well written, and it touches base with the very best of scientific writers and scientific theories within theoretical physics. Alex doesn't regurgitate this information but instead uses it to predict the future and explain his own ideas and theories about how technology will affect humanity or the transcendence of humanity into a single technological entity encompassing our entire planet.

Many visionaries see technology as the end of civilization as we know it and the beginning of a scary false hope of utopia. While Netflix shows such as The Social Dilemma have us turning off our cell phones, Alex has more of a positive take about our inescapable future and our eventual evolution into something that is not quite biological. Alex has no fear about the future, and is counting the days until the singularity with anticipation.

On a personal note, I can't say that I am as brave about looking forward to our future and our predecessors' future, but I can say that I am a smarter person because of the read. If you are one that appreciates technology, and appreciates theoretical physics, and if you are an optimist then this book is probably for you.

Phenomenal read. The audible version of this book made the perfect companion for a solo road trip. The reader enunciates everything clearly and the sound effects were also fun. So many thought provoking ideas and perspectives expressed. As someone who is already passionately interested in many of the topics discussed, Vikoulov’s ability to articulate such concepts is truly impressive. So much to ponder!

Welcome to the new Digital Paradigm

the narration is clear and articulate -

Vikoulov’s ideas are certainly interesting, but grounded much more in philosophy and religion than science. Bring an open mind (and a healthy amount of skepticism) to this book for sure.

Side note: The narrator’s frequent use of “air quotes” and seemingly intentional mis-pronunciation of common words is borderline maddening at times.

The Syntellect Hypothesis ranks up there with great books like The Singularity is Near by Google Chief Engineer Ray Kurzweil and Life 3.0: Being Human in the Age of Artificial Intelligence by MIT Scientist Max Tegmark. If you want to discover the future of humanity and the destiny of the multi-verse you must download a copy and share with your friends for high society conversations to promote awareness of the coming Technological Singularity that will be the last invention we ever need to create. I recommend after you read this book to research the Future of Life Institute where Elon Musk was a founding member. They are working to establish the ideas found in the Syntellect Hypothesis to make sure that artificial intelligence is beneficial for the future.

When they say, “magnum opus,” they’re not kidding. This is truly an “important work” of information, insight, and imagination that mixes physics, neuroscience, futurism, philosophy and spirituality to help the reader not just understand reality — but where reality might be taking us, or, rather, where we will be taking reality.

A well researched scientific argument that our universe is generated by consciousness.

If a bird, a fish and a snake were to make their way to the Omega point, they would each take their own path to the same point. In the same way there are different paths to truth and Alex has chosen to take the science path. His extensive research into many credible sources and explanation of recent findings in science are effectively communicated with the narrator articulating very clearly. If the narrator took singing lessons he would get five stars. I really enjoy the way Alex paints a positive picture but I do not share the optimistic view that we are making massive strides towards synthesis with the Omega point. The may happen suddenly with AGI but for now I think that the sages of old had a better handle on enlightenment than we do now. I would like to see Alex tackle the question of what sort of free will decisions bring us closer to the Syntellect emergence. Although there was a fair amount of repetition in the book, it served well for reinforcement. Thank you Alex for all you work to produce a stimulating read.