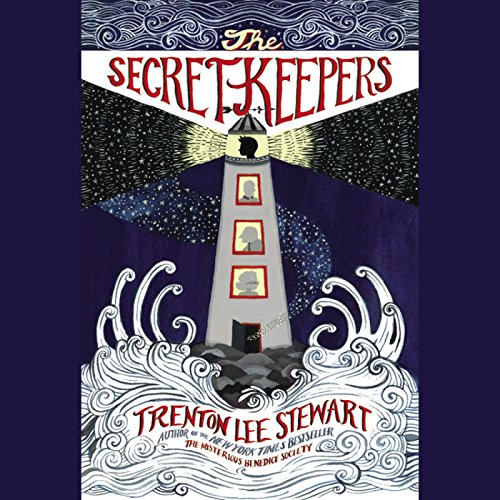 "Real flashlight under the bedclothes material...this story flies past, thrilling us as it goes." ( Horn Book)
"Tackles personal concerns: abandonment, family, loyalty, and facing one's fears." ( Booklist)
"Fans of Roald Dahl or Blue Balliett will find a familiar blend of kid power, clues, and adventure." ( School Library Journal)
"Cameron Brown's narration enhances the story's atmosphere. He employs clear enunciation and expert pacing to immerse the listener in Reuben's mind as he puzzles his way through the mystery. Brown's performance will engage young listeners who enjoy being on tenterhooks and feeling deliciously scared as they inhabit a dark world. He uses inflection to give unique voices to the many characters. Mrs. Genevieve, Reuben's moral compass, is especially well voiced with an appropriately foreign but grandmotherly accent." ( AudioFile)

Acclaimed New York Times best-selling author and E. B. White Read Aloud Award winner Trenton Lee Stewart returns with a captivating, heart-stopping adventure about thrilling secrets and dangerous mysteries - and the courage to reveal the most frightening of truths.

Eleven-year-old Reuben spends his days exploring, hiding, and practicing parkour among the abandoned buildings of the Lower Downs as a way to escape the rough times that have befallen him and his mom - but his discovery of an extraordinary antique pocket watch changes everything. When Reuben finds that the watch has the power to turn him invisible, he's propelled on the adventure of a lifetime.

Now Reuben is being pursued by a group of dangerous men called the Directions, and someone - or something - ominously called The Smoke. They all want the watch, and with the help of new friends it's up to Reuben to unravel the mysteries surrounding it and protect the city from evil.

I have read Trenton Stewart's other books to my 8 and 11 year old boys and enjoyed them. However, I think the Secret Keepers may be our new favorite. The story is great, but really the narrator is amazing. Probably the best reader I've heard on an audio book for the kiddos. Definitely holds your attention through a long and complex story. Great voices, great suspense. Definitely recommend!

A great read for the whole family

Our family enjoyed listening to this book together on a recent vacation.
The story is creative and suspenseful. it made us laugh and made us think.
Would recommend this book for kids around 10 years old.
Trenton Lee Stewart is an excellent author.

The story is fun, but the main character is really annoying, he lies, disobeys, and steals (or try’s to anyway). But the narrator is good.

Having thoroughly enjoyed the Benedict society books, I was really looking forward to this. Unfortunately I found it more frustrating that enjoyable. It took me a few months to get all the way through it as I would get annoyed and turn it off for a while. There were some fun story lines but the main character felt very whiny, and mostly it was just way too slow of a pace for me. I did enjoy the characters, especially little Penny.

It took me a while to get used to the narrator's voice, but such it is with audio books! Trenton Lee Stewart is a favorite author of mine (Mysterious Benedict Society), and this story did not disappoint.
I appreciate his use of adults as being important to children and adults as allies. Yes, some adults were "bad" and untrustworthy, but it is clear. I like Jack. He represents so many of us.... do you do something "wrong" for a greater good? Sometimes, yes. Anyway, it was a great story and I really liked how Mr. Stewart wrapped it up. He didn't leave us wondering how on earth life would go on after the primary conflict was solved. Reuben is a sweet, mostly believable, kid. I can think of at least one "tween" who could do what he did!! Well done, Trenton Lee Stewart and Cameron Brown!

My kid enjoyed this book but man it took forever to get through. Very long and drawn out.

The overall story here is interesting but the main character is not especially likeable, in fact was quite infuriating at times! and there were long passages that could have been tightened. It seemed to need a stronger editing hand. Suspenseful though and maybe likeable by someone less picky than this family!

Hopefully there’s a book 2 coming! My whole family enjoyed it. The narrator was wonderful.

We absolutely loved the Mysterious Benedict Society, and the rest of the books in that series. Therefore, it was natural to get this, too. While it was enjoyable, in paled in comparison to the others, unfortunately.

Is aweso.e I love it please make a nother pls pls pls it would be coo?