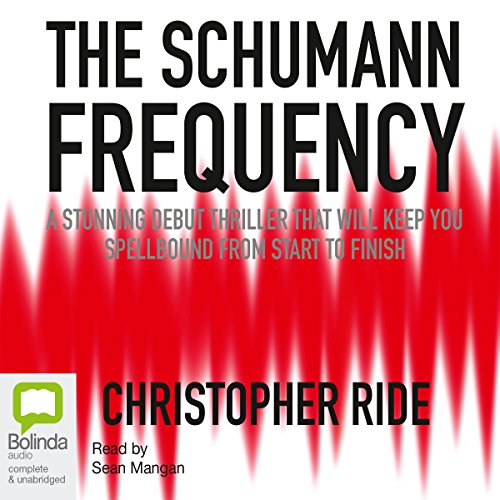 This fast-paced debut novel from the next big voice in Australian thrillers is a page-turner like no other.

Wilson Dowling is sent from the future to the present day to address the "Schumann Frequency", which has the power to slow the speed of time.

Clues buried deep within the Dead Sea Scrolls have made this Dowling's mission - he must open three energy portals hidden within the most famous archaeological sites on Earth. Wilson has to move quickly as forces of opposition mount against him, forces which threaten to unravel his mission and decide the fate of the entire planet.

An adventure not only through time and humanity, The Schumann Frequency races through various corners of the globe from the Mayan ruins in Mexico, to the Giza Pyramids in Egypt and finally Stonehenge for the book's thrilling climax. Christopher Ride takes you on a gripping journey that will keep you riveted until the very last page.

"Race against time" takes on a new meaning in this debut thriller from Christopher Ride. Time is unraveling, moving faster and faster, and a traveler from the future is sent to the present to fix it. Helena, a woman from the present day finds she has a psychic connection to this traveler, entangling her in the ensuing adventure with stops at some of the world's most interesting archaeological sites and the secrets they contain. With a sound basis in theoretical physics, natural phenomena, and the ancient world this audiobook will please fans of sci-fi, historical mystery, and action. Musician and voice actor Sean Mangan's deep-voiced lyrical performance is pensive, relishing the descriptive style and explanatory asides.

this is a book that begs for a negative rating

First, there is the book. Suddenly Dan Brown's books look tight, well-written and plausible -- by comparison. The language is painful, the leaps in the story incredible. When I though it couldn't get any worse, it did!

Then there is the narrator. I hope this was his first effort. In any case, I'd suggest that he not quit his day job. Of course, with material like this, I don't think anyone could do very well.

As I said in the subject line, this book deserves a negative rating. Save your money and time, give this book a miss.

How can something this bad get so many 5 stars

Maybe I've been spoiled by so many excellent writers and narrators available at audible.com, but this was below my minimum expectations. The dialog was just awful -- it's hard to tell if that's the fault of the wooden narration or the author's inability to write convincing dialog. Much of the story that occurs in the current time is shockingly implausible but the description of the future is downright absurd: a mail-man delivering packages and letters, written books abounding, scientists using palm handhelds...

I've never seen such a high percentage of 5 starts (6/8) for any audio book (especially with the other reviews panning the work). You should wonder about the authenticity of those 5 start reviews.

I wish I had my credit back

It's a book. A book with a decent narrator. Apparently, there's a story in there somewhere, but I can't find it.

This is the third time I've been burned by something touted as a "fantastic debut novel". I wish I had my credit back.

Action, Adventure & race to save the world

Its a Matthew Riley, cross with Indiana Jones, cross with Dan Brown and even though i haven't quite finished it i'm already looking for another book by this great author... stick with it through the changing time zones because written any other way i think it would be a little boring up front but then too packed with action at the end - instead this is a great story, great character development and always enjoyable as you are taken on a great journey!

I have been waiting to give a book a 5 star. This book hit all my buttons... it kept me on the treadmill for hours, so a bonus weight loss to go on top of a good adventure. Looking forward to then next one.

I like: action, adventure, intrigue and twists and if I am lucky with a book it gives a little education. I got all this. It is really cool and fun.

For me it's a page turner

Could hardly stop reading. Good plot, lots of suspense many unexpected twists, sometimes funny.
Ride makes a good connection between quantum physics, the Dead Sea Scrolls, the pyramids and Stonehenge. People who liked reading Steve Berry, Kate Mosse and Lincoln Child, will enjoy this book. It's no waste of money.

absolutely loved it! cannot recommend it enough! can't wait to listen to the next book.

The author must have some compromising photos of somebody high up the food chain at the publishers. There really is no other reason why this book made it to print. Maybe it's the material he had to work with but if there was a way to make this terrible story any more pathetic and painful the "performer" managed it. Audible really needs a return policy when it comes garbage like this.

Anyway, the characters are weak. The dialog reads like English is the authors 3rd language. The science, which the write up tout

A great time travel story with a good narration. first book of a series that look to be intriging (2nd book is THE FIRST BOXER listed under author Chris Ride.). Will be glad to listen to any more I can find.

I love this book I couldn't wait to finish it. My only regret is that I read the 2nd book first. More please.

Sean Mangan has never been a reader I’ve enjoyed but wow, this is really bad. And it’s completely destroyed this story, I just can’t listen anymore!

He has his normal boring style tones but worse there’s a cadence and tonality that repeats very literally every single sentence no matter what that text is. And that’s not an exaggeration, I’m halfway through listening and it’s playing as I write this and yep, the same repeating pattern every sentence without fail.

It gets worse, wait till you hear dialogue from different characters. He just says it, doesn’t even punctuate properly. It sounds like when someone is doing a comedy routine impersonating a bad actor and going over the top when doing it.

It’s terrible and I have to return this book, won’t ever get anything again read by this reader.

Waste of a credit. Wish I could get a refund. Not worthy of Audible