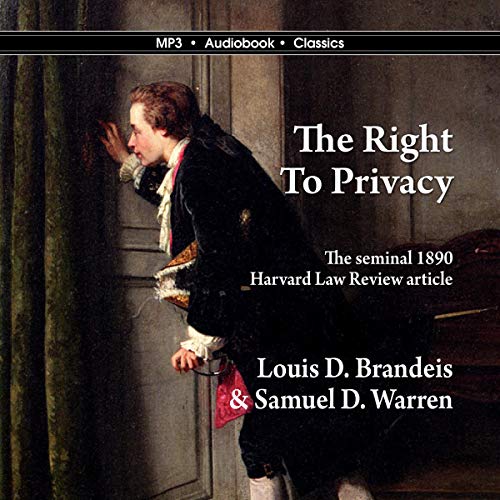 "The Right to Privacy" is an article that appeared in the Harvard Law Review on December 15, 1890, that is considered the first document that argued for the inherent right to privacy, defining the right as one of the natural rights, the “right to be left alone”.

The authorship is credited to both Louis Brandeis and his law partner, Samuel Warren, but the article was apparently written mostly by Brandeis. The article was inspired by the coverage of intimate details of private lives made possible by the use of instantaneous photography and the mass circulation of newspapers.

The core argument is an extension of the fundamental right of the individual to full protection in person and property and notes that the principle is continually reconfigured in light of political, social, and economic change, in much the same way that protection against bodily injury came to include fear of injury in addition to actual injury, and that property grew to add intangible property to tangible property.

The article examines libel, slander, and intellectual property law as possible protections and finds them inadequate, proceeding to examine case law and attempt to define privacy itself and finally imposes limitations on the protection.

While short by contemporary standards, "The Right to Privacy" has been called one of the most influential essays in the history of American law and is especially relevant today as new technologies and business models seek ever more personal data and threats of terror invoke escalating surveillance tactics.