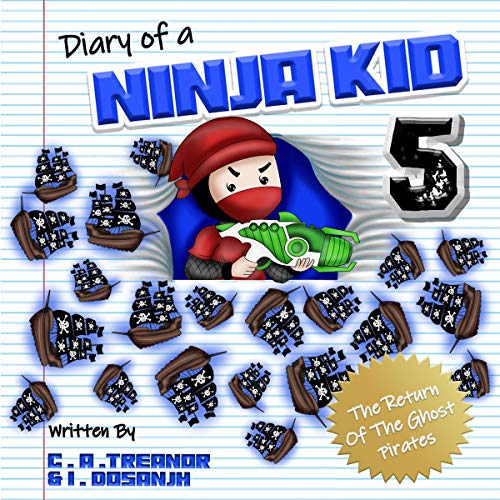 The Return of the Ghost Pirates: A Funny Adventure for Kids Ages 6-12

Are you ready for a ghost pirate invasion? Sounds like you need a superhero ninja kid and his team to help you out!

As the story continues, one enemy gets defeated and another one spawns to terrorize the world. With no more zombies around, everyone got to see the ghost ships appear out of nowhere. Apparently, filling the ocean with the water of life brought more than zombies back to life.

The Ninjas have to figure out how to stop the ghosts, but how?

At least with the zombies and the aliens, they kind of knew how to stop and fight them. Ghosts? Not so much. They’re just like farts that developed consciousness. They can’t be whacked or touched, but they are deadly. They smell just as bad, as well.

Is it because they have been dead for so long, or it’s just their gassy ghost form that makes them smell like rotten eggs and maggoty meat?

Do he, Rocky, and the team, along with their new spooky friend, stand a chance?

Get ready to hold your nose and dive into an apocalypse of ghosts and pirate ships to find out! Dig out your clothespin, block your nose, and let’s get stuck in.

Diary of a Ninja Kid book five: The Return of the Ghost Pirates will have any kid who loves ninjas, pirates, and farts be on the edge of their seats. If you have a superhero in training who loves a hilarious, action-packed adventure, this story’s a surefire way to keep any young kid enthralled.

For an adventure that truly understands what it’s like to be a 12-year-old kid, click “Buy Now” right away.

Be warned: This book contains farts!

The Return of the Ghost Pirates: A Funny Adventure for Kids Ages 6-12に寄せられたリスナーの声