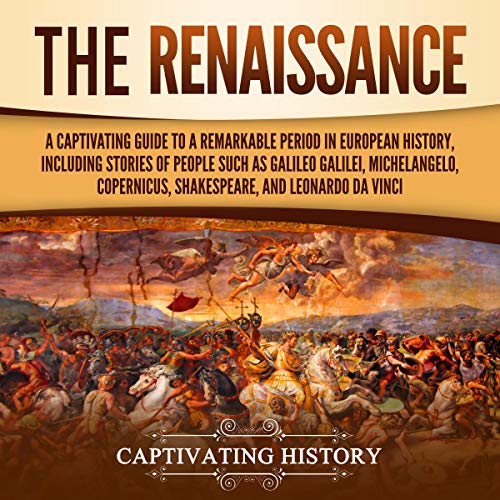 If you want to discover the captivating history of the Renaissance, then pay attention....

“Renaissance” is the French word for “rebirth,” which is given to the period of time between the 14th and 17th centuries in Europe when there was a marked resurgence in classical art, education, philosophy, architecture, and natural sciences.

At its heart, the Renaissance marked a widespread stability that Europe had not known for centuries, coupled with an inevitable desire of people everywhere to learn and express themselves. Education and economic stability transformed Europe into a beacon of high culture that eventually led to the Enlightenment and the Modern Age as we know it.

In The Renaissance, you will discover topics such as:

Get this audiobook now if you want to learn more about the Renaissance!

A good, pleasant summary of the times, the characters, the advances and achievements of the Renaissance period in various countries.

A lot of good information on the History of the Era. In a short and concise book that made it a knowledge experience enjoyable.

A Lot Of Information

Had a lot of information on a kind of things. Could have been more -detailed, but a good start to learn more about the renaissance man.

Just a concise overview of the Renaissance before you get into a more serious text - valuable, if you expect nothing beyond that.

This book was so good I've bought a few more in the American Heritage series. If you want a good review of the Renaissance in Italy, then this is the ideal book for you.

I was shocked by how easy it was to understand the Italian Renaissance. Some history books are an effort to digest, but this one was such a flurry I got myself caught up in it and finished it so early.

This book gives us Renaissance in all its brilliance fitting to a description of the time of renewal and vitality.

I love history and captivating history has made it so easy to keep you informed! As I have aged I find that I have forgotten many things and this is a quick way to refresh my knowledge. Thank you!

This book does the job. I like people more than numbers and dates and this book talks about many Renaissance people rather than focusing on facts and dates. Great easy version.

Enjoyed book. Puts the Renaissance in historical perspective, by the European country. Highly suggest for a quick summary or an Introduction to the subject.

Very enlightening book, I enjoyed this book because it touched on a lot of different parts of history and popular people like Michelangelo, Henry VIII, and other religions.

Love that you can quickly get up to speed on an era and get all the facts in one simple audiobook!

A detailed overview of Renaissance history. Short and easy to understand in one sitting. Nothing goes too in depth which may bother some listeners.

Just a concise overview of the Renaissance before you get into a more serious text - important, if you expect nothing beyond that.

Good book showing the essential nuts and bolts Theories of the subject matter. Nothing too deep. Really suited for middle or High School level intro stuff. Enjoyable prose and Presentation.

While this was a very trying in history with many problems & oppression in every phase, I think this is a great overview. I remember when we studied all this history in school and this brought back many informal names & events.