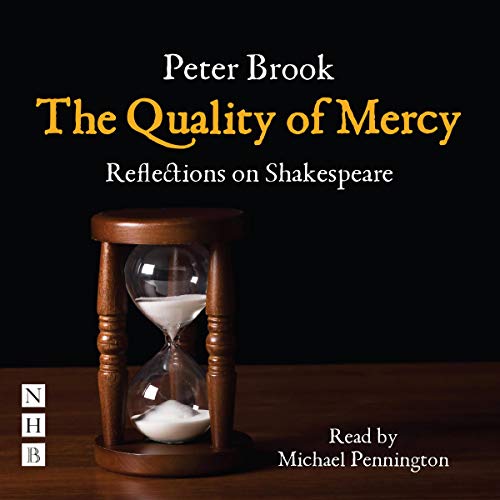 The Quality of Mercy

Unique insights into Shakespeare, from one of the world’s most revered theatre directors.

In this short but immensely wise book, visionary theatre director Peter Brook debates the questions that are central to our understanding of Shakespeare, and revisits the plays he has directed with notable brilliance, including King Lear, Titus Andronicus, and, of course, A Midsummer Night’s Dream.

An illuminating and provocative insight into a great director’s relationship with our greatest playwright, narrated by leading Shakespearean actor Michael Pennington.

Peter Brook is one of the world’s best-known theatre directors. Outstanding in a career full of remarkable achievements are his productions of Titus Andronicus (1955) with Laurence Olivier, King Lear (1962) with Paul Scofield, and The Marat/Sade (1964) and A Midsummer Night’s Dream (1970), both for the Royal Shakespeare Company. Since moving to Paris and establishing the Centre International de Créations Théâtrales at the Bouffes du Nord, he has produced a series of events which push at the boundaries of theatre, such as The Conference of Birds (1976), The Ik (1975), The Mahabharata (1985), and The Tragedy of Hamlet (2000). His films include Lord of the Flies (1963), King Lear (1970), and The Mahabharata (1989). His books, especially The Empty Space (1968), have been hugely influential.

Michael Pennington is a major British actor and writer. He has played a variety of leading roles in the West End, for the Royal Shakespeare Company, for the National Theatre and for the English Shakespeare Company, of which he was co-founder and joint artistic director. He is the author of several highly praised books on Shakespeare.