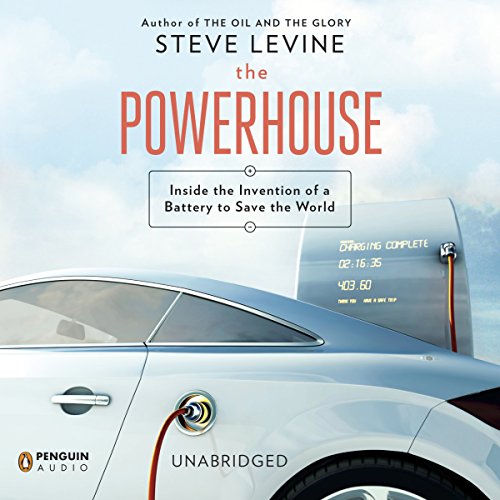 Inside the Invention of a Battery to Save the World
著者： Steve LeVine
ナレーター： Mike Chamberlain
再生時間： 10 時間 48 分
カテゴリー： 洋書, Science & Technology

A Soul of the New Machine for our time, a gripping account of invention, commerce, and duplicity in the age of technology

A worldwide race is on to perfect the next engine of economic growth, the advanced lithium-ion battery. It will power the electric car, relieve global warming, and catapult the winner into a new era of economic and political mastery. Can the United States win?

Steve LeVine was granted unprecedented access to a secret federal laboratory outside Chicago, where a group of geniuses is trying to solve this next monumental task of physics. But these scientists - almost all foreign born - are not alone. With so much at stake, researchers in Japan, South Korea, and China are in the same pursuit. The drama intensifies when a Silicon Valley start-up licenses the federal laboratory's signature invention with the aim of a blockbuster sale to the world's biggest carmakers.

The Powerhouse is a real-time, two-year thrilling account of big invention, big commercialization, and big deception. It exposes the layers of competition and ambition, aspiration and disappointment behind this great turning point in the history of technology.

This is a very detailed story of the scientists, car companies, government programs, and venture capitalists, involved in the development of the battery of the future. This tries to do quite a lot and may be too detailed for many readers. I understand those that feel it was boring. It covers the stories of battery development, the process of vying for a big government projects, the greed and maneuvering of venture capital funded startup companies, and how EV’s might affect the environment and the oil industry. Although this was not an easy listen, I learned a lot and enjoyed the various storylines. Overall I was very satisfied with this book. The one thing was unsatisfying is the story ends abruptly with the battery of the future still in flux. The narration was very good, dealing with the technical detail very well.

Great if this is a topic of interest

Great mix of science and narrative, so long as you are interested in battery technology. Not much discussion of Elon Musk or Tesla at all, in case that is a reason you're considering this book.

This book promises the description of a battery powerhouse, but fails to deliver. There were several good stories and narratives about the history of the battery, but it culminated in failed efforts to develop a production model battery for the Chevy Volt. More disappointing was it's almost complete omission of Tesla's efforts and successes in bringing a functional 200+ mile car to the market years before GM.

An informative look at the challenges, pitfalls and potential rewards that comprise the effort to develop a better battery.

It is amazing how LeVine has made the story of scientific development of a stationary chemical technology so freaking interesting! I am an energy enthusiast in college reading books to get a better idea of the industry. this book just got me caught up - at least in the American perspective - on the battery race, which is a critical part of our energy future. It is gripping and informative at the same time. Given that you're not a battery guy yourself, it is sure to her in the relevant battery chemistries currently under development. I also loved the behavioural nuances and Levine's a cute observationa about the characters' actions surely give much to learn from. Finally, I guarantee you that the names in the book will become heroes in you're mind so definitely go Google them to humanize them and find out all about the race since the book.

t this is an excellent book. if you want to know everything about Batteries. i have learn a lot.. this book truly classic

I was very intrigued by this book but I feel kind of let down by the rather abrupt inconclusive ending. Maybe in ten or fifteen years we can get the sequel.

I believe this was a long form article before it was a book. Probably should have stayed that way. Not very compelling, given what could probably be done with the topic.

Inside look into the battery world & much more!

This is an amazing peak inside the battery world, the National Labs, DOE/Washington and international business. What becomes apparent immediately is that scientific investigation is really hard but dealing with the human foibles of ego, self-interest, bureaucracy, territoriality, and endless political games is even harder and more unpredictable. Plumbing reality for the laws of Nature is the easier task. How did we ever advance as far as we have????

Tough to get excited about the ending...

...but that's not Steve's fault. This book is well written and has a lot of information.

quite hard to follow with so many characters - at some point i no longer knew which battery guy is working for which company, and i did listen several chapters in each sitting. it was interesting, but maybe too detailed about labaratories scientists to my liking.