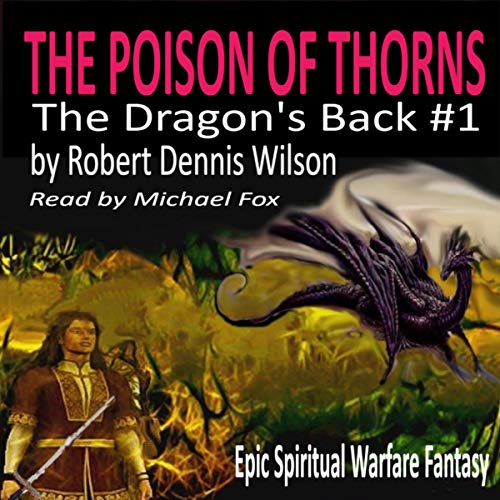 The Poison of Thorns: The Dragon's Back Book 1 by Robert Dennis Wilson, unfolds as an intriguing and action-packed Christian fantasy with bards, dragons, swords, and mysterious black-robed villains lurking in the shadows.

Ten long years after the mysterious murder of their parents, two brothers have just been freed from incarceration in a prison-like orphanage. Against their wills they are torn apart and launched into separate quests against conflicting and dangerous forces. Independently they struggle to learn the truth and to resolve the unanswered cries for vengeance that have long consumed their lives with the poisoned thorns of unresolved bitterness. Finding themselves pitted against a strange and hostile world, overwhelmed with many questions; it becomes their individual obsessions to find the hidden answers and rescue each other.

Why were they locked away in that out-of-the way orphanage for ten long years, when they had living kin who would gladly have claimed them? Who are the sinister black-robed Dragonmen and what is their hidden agenda? And why are these black robes so interested in the two teenage brothers that they would mobilize all of their considerable resources to possess them?

What is the significance of the shape of their isolated continent? Is it true that it appears to be a gigantic Dragon floating above the endless depths? What about the rumors that man-sized, almost invisible dragons are stalking their nights?

And finally, who are the mysterious followers of the mythical Gryphon? Why do they alone, of all the diverse peoples of Dragonsback, have the ability to swim in the dark bottomless waters that surround their land? And most importantly, who and where is that mysterious Swimmer; the man they both witnessed taking part in the drowning deaths of their parents? Is he still available...for retribution?

well thought out allegory. The narrator was fantastic and really captured the essence of each character