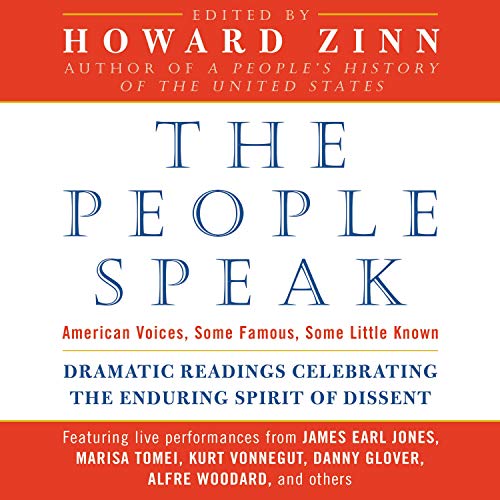 To celebrate the millionth copy sold of Howard Zinn's A People's History of the United States, Zinn drew on the words of Americans - some famous, some little known - across the range of American history. These words were read by a remarkable cast at an event held at the 92nd Street Y in New York City that included James Earl Jones, Alice Walker, Kurt Vonnegut, Alfre Woodard, Marisa Tomei, Danny Glover, Harris Yulin, Andre Gregory, and others.

From that celebration, this audio was born. Collected here under one cover is a brief history of America told through dramatic readings applauding the enduring spirit of dissent.

Here in their own words, and interwoven with commentary by Zinn, are Columbus on the Arawaks; Plough Jogger, a farmer and participant in Shays' Rebellion; Harriet Hanson, a Lowell mill worker; Frederick Douglass; Mark Twain; Mother Jones; Emma Goldman; Helen Keller; Eugene V. Debs; Langston Hughes; Genova Johnson Dollinger on a sit-down strike at General Motors in Flint, Michigan; an interrogation from a 1953 HUAC hearing; Fannie Lou Hamer, a sharecropper and member of the Freedom Democratic Party; Malcolm X; and James Lawrence Harrington, a Gulf War resister, among others.

To celebrate the one millionth copy sold of the late Howard Zinn’s masterpiece, A People’s History of the United States, a who’s who of American letters and cinema convened to 92nd Street Y for a night of amazing performances. Combining some of the greatest passages from Zinn’s book, including selections from Frederick Douglass, Mark Twain, and Malcolm X, with the great voices of Alice Walker, Kurt Vonnegut, James Earl Jones and others, The People Speak is an invaluable recording of an incredible night of inspiration and history.

Children in our schools should be learning about history from one of Howard Zinn's books. They are always very informative and this book is no exception, its the only way to learn the real History of the real American People.

Anything by Howard Zinn is great and this is no different. Two thunbs up and a definite must listen for every American.

I loved “A People’s History of the United States” and so this performance was a logical follow up. I was absolutely blown away by the quality and emotion of the performers. It brought new life and vigor to an already inspirational book.

Very good, but too short

I wish it was the full three hours for the price. The video is probably a better bet.

These are the things we weren't taught in school but that are of immense importance if we are to remember that history repeats itself. It is amazing to hear how close these old struggles are to our own current ones. Short speeches, thoughts and writings of many. Easy to follow and not terribly dense on information.