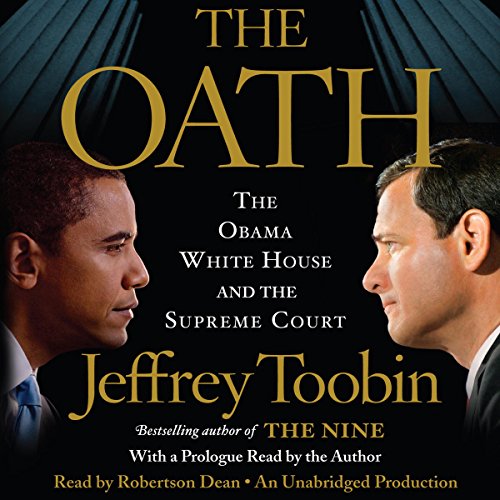 From the prizewinning author of The Nine, a gripping insider's account of the momentous ideological war between the John Roberts Supreme Court and the Obama administration.

From the moment John Roberts, the chief justice of the United States, blundered through the Oath of Office at Barack Obama's inauguration, the relationship between the Supreme Court and the White House has been confrontational. Both men are young, brilliant, charismatic, charming, determined to change the course of the nation - and completely at odds on almost every major constitutional issue. One is radical; one essentially conservative. The surprise is that Obama is the conservative - a believer in incremental change, compromise, and pragmatism over ideology. Roberts - and his allies on the Court - seek to overturn decades of precedent: in short, to undo the ultimate victory FDR achieved in the New Deal.

This ideological war will crescendo during the 2011-2012 term, in which several landmark cases are on the Court's docket - most crucially, a challenge to Obama's controversial health-care legislation. With four new justices joining the Court in just five years, including Obama's appointees Sonia Sotomayor and Elena Kagan, this is a dramatically - and historically - different Supreme Court, playing for the highest of stakes.

No one is better positioned to chronicle this dramatic tale than Jeffrey Toobin, whose prize-winning best seller The Nine laid bare the inner workings and conflicts of the Court in meticulous and entertaining detail. As the nation prepares to vote for President in 2012, the future of the Supreme Court will also be on the ballot.

Good but felt like there was some repeat from The Nine

I enjoyed the historical details and the interpersonal relationships on the court. My only complaint was that parts felt like a repeat of Toobin's The Nine. Overall I enjoyed it and learned a few things.

Toobin's dislike of the now late Antonin Scalia is clear (and perhaps understandable, especially given the authors own legal background), but the book gives you a thorough look into both the liberal and conservative chambers of the court. Toobin does an admirable job of translating legalese. Robertson Dean's narration is as always great (listen to The Forever War by Dexter Filkins when you start missing his voice).

A look at the Supreme Court

Toobin a lawyer and legal reporter based this book on interviews with the Justices and approximately forty of their law clerks. The book is a narrative of the early years of the Roberts Court which produced a series of 5 to 4 decisions that pitted the Obama administration against the conservative Justices. The book ends with the tie breaking vote to uphold The Affordable Care Act. Toobin reveals the goal of the conservative Justices in rolling back laws on gun rights, abortion, gender discrimination, campaign finance and so on. The Republican Party has controlled the Court since 1953. Toobin looks at how the current makeup of the Court reflects changes in the current Republican party at large, underscoring the fallout created by the departure of the moderate Republican Justices. The most enjoyable part of the book is the human details about the Justices. The book provides a brief biography of each of the justices that has served on the Robert Court. I recently read “The Roberts Court” by Marcia Coyle which covered the same time frame. Coyle went into detail about the cases and the law, Toobin proves more information about the Justice personal life and beliefs than does Coyle. Reading both books provided me with a better understanding of the current court than reading just one of the books. Toobin’s thesis is what he calls the competing visions of Roberts and Obama. Both are intelligent, both products of Chicago, both graduated of Harvard Law School but they have a different view of the meaning of the Constitution. Obama believes the Court should be stable and make gradually changes. Roberts believes in rapid changes to the conservative ideals. I found it interesting that Toobin credits Justice Thomas as the father of the Tea Party. Toobin points out that the Republican Party has made it a priority to put its people into judgeship in all categories of State and Federal courts. Obama has been negligent in appointing Federal Judges. Toobin states a Republican Senator complained “how are we supposed to block appointments if Obama does not appoint them.” Robertson Dean did a good job narrating the book.

Repeat from the nine with some important updates. Interesting to learn how long the Republicans have been working to undermine the integrity of this branch of government.

Don't miss this one.

How often are you entertained and educated at the same time. Riveting expository writing, character development, and fresh writing style. However the chronical of the high jacking of the court by the political right often made me so angry. if my ipod were not so expensive, I would have thrown it out the window. Wonderfully told cautionary tale.

The US Supreme Court, in a range of crucial matters, is a divided house. Five conservatives judges and four liberals ones dispute constitutional interpretation. The results sometimes seems unpredictable. Jeffrey Toobin, in a continuation of his previous book (The Nine: Inside the Secret World of the Supreme Court), describes the relationship about the Obama administration and the Supreme Court (2010-2013). The nominations of Justices Sonia Sotomayor and Elena Keagan, their backgrounds, the facts leading to some importants decisions (Citizens United and Obama Care) are exposed. Toobin's text is clear and informative. The language is understandable for the non expert and suitable for the law professional.

Great book. The intro read by the author was good and memorable. The narrator for the rest of the book was a little monotone for my taste. When the book stated I didn't think I'd listen to the whole book but the writing and story made up for any other lacking parts.

Great insights and stories into the court. Was fun to hear about the two new Justices since Toobins' last book.

Not as much info on the relationship between the court and Obama as the title suggests. I'd say it's more of a book about the court than of that relationship.

Where does The Oath rank among all the audiobooks you’ve listened to so far?

In the top five

A truly gifted writer who tells a fascinating story of the Roberts court and the chief justice's strategic brilliance. Interesting takes on all the sitting justices, and insights as well into Obama's judicial philosophy. There is a noticeable tilt to the left, but Toobin is fair to all and generally balanced. You'll never view the Supreme Court in same way after reading this book.

Good listen, not great, but good.

Yes if they're into politics.

I think Roberts is the most complex. I wouldn't say favorite.

Great narrator. The author does not approach the subject matter from an unbiased point of view.