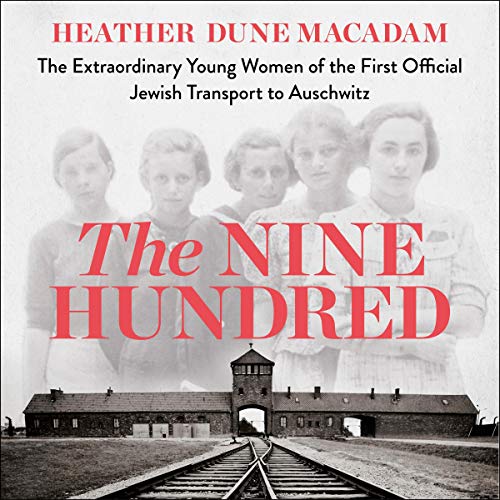 The untold story of the 999 young, unmarried Jewish women who were tricked into boarding a train in Poprad, Slovakia, on March 25, 1942 that became the first official transport to Auschwitz.

On March 25, 1942, nearly a thousand young, unmarried Jewish women boarded a train in Poprad, Slovakia. Filled with a sense of adventure and national pride, they left their parents' homes wearing their best clothes and confidently waving good-bye. Believing they were going to work in a factory for a few months, they were eager to report for government service. Instead, the young women - many of them teenagers - were sent to Auschwitz. Their government paid 500 Reichsmarks (about £160) apiece for the Nazis to take them as slave labour. Of those 999 innocent deportees, only a few would survive.

The facts of the first official Jewish transport to Auschwitz are little known yet profoundly relevant today. These were not resistance fighters or prisoners of war. There were no men among them. Sent to almost certain death, the young women were powerless and insignificant not only because they were Jewish but also because they were female. Now, acclaimed author Heather Dune Macadam reveals their poignant stories, drawing on extensive interviews with survivors, and consulting with historians, witnesses and relatives of those first deportees to create an important addition to Holocaust literature and women's history.

With an introduction from the author and a final note written and read by Edith Friedman Grosman.

PLEASE NOTE: When you purchase this title, the accompanying reference material will be available in your Library section along with the audio on our Desktop Site.

Must Read/listen with great narration

So glad I bought this book on Audible, it made me realise things I had not previously thought about and see history from the female perspective. I listened with my breath held at times or with tears on my eyes. I also recommend visiting Auschwitz, nothing brings the holocaust to life more than standing at this murder factory where so many poor, innocent souls had their life taken in such a cruel and barbaric way.

I have read and listened to many survivors stories but this book is extraordinary.
eventhough I've heard the last words a moment ago I'm still in tears.
how strong some of these women were and how much they've suffered even after surviving hell is beyond everything.
well written well performed .....
I highly recommend this book.

This book touches your heart . It was heartbreaking but at the same time shows the courage of these girls not only through war but after as they rebuilt their lives. The only down side I would say is the narrator pulling you into a story then announcing the next chapter so upbeat. I would recommend this book to everyone

Very moving, very well researched and with excellent narration. I still don’t know they survived. I will never understand the mind set of the German guards, especially the Doctors. A total absence of humanity.

What an informative, heart warming but thought provoking story. I have read quite a few books on the holocaust and never knew how these young girls were lulled into thinking they were going to work for the government. What them and their families went through is beyond comprehension and understanding. It is really important their history is told over and over and this book is testament to their experiences.

heartbreaking but this book has to be read, cried when at the end I heard the voice of one brave survivor. Their stories must never ever be for gotten

A book everybody need to listen

I wish I had read this book before visiting Auschwitz, my attitude towards the place would've been different. The horrible experiences the girls went through, the propaganda their families were told, how they were apandoned by the government after their release... History that should never be forgotten.

every one should read this book. harrowing because it is true.not only it shows how cruel people can be but also what people can survive and still remain human.

A wonderful and heart breaking story extremely well narrated. Everyone should listen to or read this book.

No one or two words can describe this book, because it is informative, Halloween, moving, heartbreaking and even exciting when good things happened and to the girls while in the camp and after the war. The narrator was excellent

As a father of three teenaged daughters this book had a great effect on me. I am greatful for the efforts to bring this forth and to not only underline the horrors that occurred be the strengh and willingness these girls had to survive and help all they could.

I am absolutely astounded by this book. It is sad, shocking, devastating, honest, and poignant, all at the same time. This is, by far, the best book I have EVER read. I look forward to reading more along these lines. Thank you so very much to the writer and narrators. 💚💚💚💚

a must be heard story

I loved how this story is told ,I admire those girls and how they endured all their lives during and after the war .

This was the most harrowing story I have ever listened to. It's a vital book.

I have read many books on the holocaust and fround this extremely heartbreaking.. The story of strength, courage to survive. How another person can treat others with horrific cruelty. The narration was excellent. In tears at the end.

a very powerful story of such brave women. the story is harrowing. I cannot understand such cruelty by the SS and even the Slovaks themselves. it is astounding how these women's bodies could survive and how they had the strength to continue. Bless you all.

This is a very disturbing book. It happened. We know how horrendous it was. Cruelty to humanity.

This book was phenomenal. The narratives of these young women desperately needed to be told and they were delt with carefully and honestly. In the trying times we live in, sometimes we need to be reminded of the horrors humanity are capable of and the incredible strength of those who defy and survive.