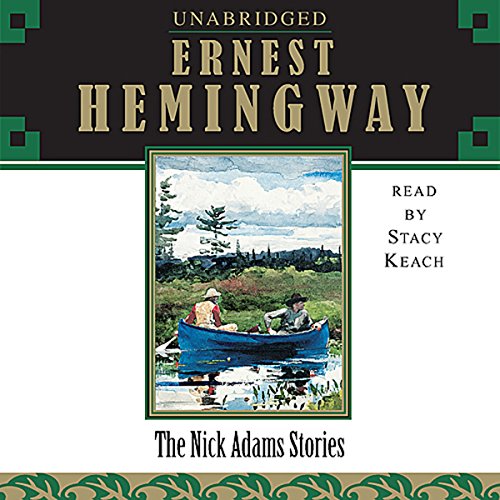 These classic stories feature one of Hemingway's most famous characters.

"Of the place where he had been a boy he had written well enough. As well as he could then." So thought a dying writer in an early version of The Snows of Kilimanjaro. The writer was, of course, Ernest Hemingway. The place was the Michigan of his boyhood summers, where he remembered himself as Nick Adams. The now-famous "Nick Adams" stories show a memorable character growing from child to adolescent to soldier, veteran, writer, and parent - a sequence closely paralleling the events of Hemingway's life.

In this arrangement, Nick Adams emerges clearly as the first in a long line of Hemingway's fictional selves. Later versions were all to have behind them part of Nick's history and, correspondingly, part of Hemingway's. This is a must-have for fans of the iconic author.

In Hemingway's best short stories, a curtain is parted then closed, revealing the center of a man's being. Some of these stories are included in this collection, such as "Big Two Hearted River," "The Last Country" and "Fathers & Sons."

Stacy Keach is outstanding, and cleary understands the writer. I hadn't realized how versatile Keach was.

The Nick Adam Stories are on par with the best of Hemingway's writing, and Stacy Keach's reading taps directly into the soul of Hemingway. Amazing.

These stories are among Hemmingway's best creations, and are wonderfully rendered by the reader. Lovely prose, vivid scenes, and important lessons.

Stacy Keach's reading is incredibly dexterous as he brings Hemingway's characters to life. Earnest would be pleased.

Mr. H manages one true sentence when two might do and leaving a word out risks nothing but empty space.
Space occupied but empty notwithstanding.

Excellent read for the outdoorsman… And gentlemen…

Nice to return to

Read some of these in high school and college at univ of mich Ann arbor. But now in chronological order they are moving and explain a young author grappling with growing up. I remember "the battler". How greaat to return to. And Stacy keach is perfect

Narrated perfectly. Stories were as only as Hemmingway could write. Very descriptive of his surroundings.

Stacy Keach is a terrific reader, but the stories are uneven in terms of quality. For every story at the level of "The Killers" and "Big Two-Hearted River," there are two or three duds. And can someone please, PLEASE tell audiobook producers that there is NO NEED for thirty seconds of music at the start of each chapter? It's unnecessary and irritating and does nothing for the listener's experience.

I read the stories as a child and love them.
Stacy Keach narrating them is extremely satisfying