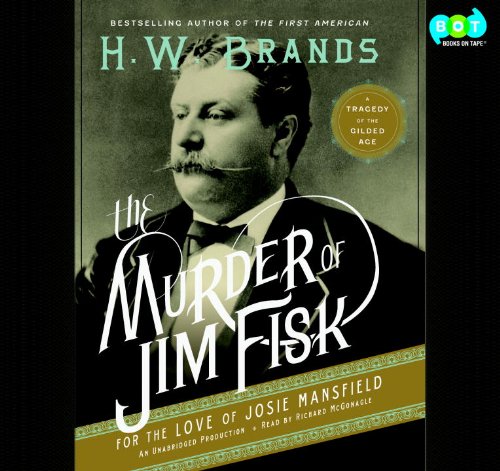 “H. W. Brands is a master at finding the essence of an important American life, telling its story grippingly and showing us why it is important to our own generation.” (Michael Beschloss)

Even before he was shot dead on the stairway of the tony Grand Central Hotel in 1872, financier James “Jubilee Jim” Fisk, Jr., was a notorious New York City figure. From his audacious attempt to corner the gold market in 1869 to his battle for control of the geographically crucial Erie Railroad, Fisk was a flamboyant exemplar of a new financial era marked by volatile fortunes and unprecedented greed and corruption. But it was his scandalously open affair with a showgirl named Josie Mansfield that ultimately led to his demise.

The Murder of Jim Fisk for the Love of Josie Mansfieldに寄せられたリスナーの声

Jim Fisk was an important player, very briefly, in the rise of financial/industrial capitalism in the United States. A partner of Jay Gould, often identified as one of the Robber Barons of the Gilded Age, Fisk was involved (with Gould) in an effort to corner the US gold market (among other things), and was also a flamboyant partier and womanizer (in contrast to the retiring and taciturn Gould). The book contains some interesting gems about NY life in the period, but fails (in such a short book, it would be hard to do so) to provide much context in terms of US finance, railroad development or politics.

The book is well-written and well-narrated. But in the end I wasn't sure what it was about, why it was relevant to our understanding, today, of that period, or the relevance of that period to today. Addressing such issues was clearly not among the objectives of HW Brands, a great popular historian, a number of whose books I have read or listened to in the past.

This story, set in the 1870s to 1900s, is a remarkable tale of how love's perils has not changed. What love did to married men in the 1870s is no different than today. The story surrounding the murder allows the reader to understand how powerful men were predisposed to changing the society, through finance, to mirror their belief systems.

Brands imparts a storyteller magic and I finished it in one sitting. I could not put it down. Beauty had its privileges; beauty brought down two men, and still becomes the advantage of those so blessed with it. I enjoyed this old, Victorian era true story, and the weaving of the tale is done peculiarly well by Brands.

One area that I wish would have been included is the thinking of the wives of these men. Were they passive participants in their husband's adulterous ways, or were they bystanders stuck in society's norms of the day?

It's hard to believe that an audiobook on such an interesting subject could be so dull and boring. Part of the problem is Brand's style. It's like listening to someone read a newspaper article to you, a very looooong article. It is just the facts and nothing but the facts. Now if you had a voice talent that could imbue life into even the most boring of subjects, say Will Patton, it would be different. But McGonagle's straightforward reading only makes matters worse. Save your credits and pick a different book.