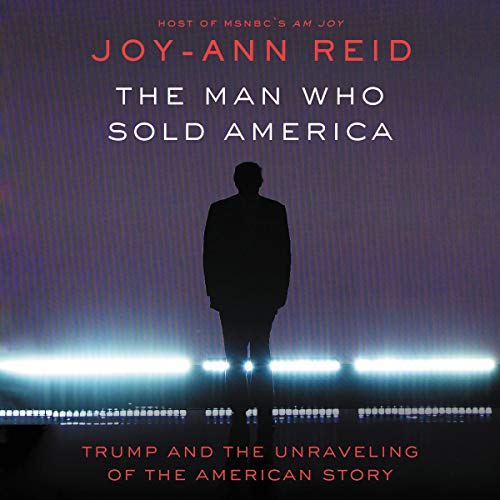 The Man Who Sold America

"The host of AM Joy on MSNBC argues that President Trump’s administration is characterized by grift and venality that demeans the office and diminishes America." (New York Times Book Review, New & Notable)

Is Donald Trump running the "longest con" in US history? How did we get here? What will be left of America when he leaves office?

Candidate Trump sold Americans a vision that was seemingly at odds with their country’s founding principles. Now in office, he’s put up a "for sale" sign - on the prestige of the presidency, on America’s global stature, and on our national identity. At what cost have these deals come? Joy-Ann Reid's essential new audiobook, The Man Who Sold America, delivers an urgent accounting of our national crisis from one of our foremost political commentators.

Three years ago, Donald Trump pitched millions of voters on the idea that their country was broken, and that the rest of the world was playing us "for suckers." All we needed to fix this was Donald Trump, who rebranded prejudice as patriotism, presented diversity as our weakness, and promised that money really could make the world go 'round.

Trump made the sale to enough Americans in three key swing states to win the electoral college. As president, Trump’s raft of self-dealing, scandal, and corruption has overwhelmed the national conversation. And with prosecutors bearing down on Trump and his family business, the web of criminality is circling closer to the Oval Office. All this while Trump seemingly makes his administration a pawn for the ultimate villain: an autocratic former KGB officer in Russia who found in the untutored and eager 45th president the perfect "apprentice".

What is the hidden impact of Trump, beyond the headlines? Through interviews with American and international thought leaders and in-depth analysis, Reid situates the Trump era within the context of modern history, examining the profound social changes that led us to this point.

Providing new context and depth to our understanding, The Man Who Sold America reveals the causes and consequences of the Trump presidency and contends with the future that awaits us.

Joy-Ann Reid wrote an excellent history of the 2016 Trump presidential campaign. I highly recommend this book.

Good explanation of how we got to where we are

I am a big Joy Reid fan. I'm not sure what I was expecting but as someone who follows Joy and the news cycle and politics closely, this for me was more of a refresher than a revelation. Nevertheless, Joy is easy to listen to, clear in her explanations, and very knowledgeable about the political climate that led the election of Donald Trump as President of the United States. I particularly enjoyed the discussion on the Davos Conference, and I am very concerned and somewhat alarmed by the warning of how capitalism can easily slip into fascism as more wealth is concentrated in the hands of fewer and fewer people, and the resultant rise of tribalism. We see it happening before our very eyes -- and with a Congress and court system, either unwilling, or unable to put on the brakes. This book is the canary in the coalmine.

It's really a shame that he wants to go back to the white and colored water fountains. Every man women and child in my family will be out there voting. Make America-America again.

A Welcome Addition to Any Anti-Trump Library

Reid's book is an eloquent overview of the Trump administration through the release of the Mueller report. (I didn't quite understand the title's relationship to the content, however.)

Do not hesitate to purchase this book I prefer the audio versions especially when the author is the narrator. It brings life to the wonderful words Joy has penned.
I am eternally grateful for her voice of truth.

A sobering, intelligent, and thoughtful assessment of what's going on in this country right now. Joy Reid produced a book that I could not stop listening to till the very end.

I enjoyed this Audiobook immensely. Thank you Joy Reid for clarifying and shining light on the illegitimate inhabitant of 1600 Pennsylvania Avenue.

Great research and revelation of the undercurrents of America's complex political, economic, and racial systems.

Everyone needs to read this.

Great book. Full of history everyone needs to know. Joy-Ann Reid does a great job of writing and reading this book. She has a talent for making history interesting and in some places, entertaining.
Thank you Joy-Ann for making me a better person for teaching me so much.

For anyone confused about what happened (and continues to happen) with the 2016 election and the criminal acts of our current president, Joy-Ann Reid has explained it in a way that anyone can understand it. Thanks!